This is the first time I’ve attended a Council of Institutional Investors (CII) semi-annual conference. As at most conferences, the biggest draw is the ability to network, making new contacts and refreshing old ones. I was delighted to reconnect with Meredith Miller, chief corporate governance officer, UAW Retiree Medical Benefits Trust. I hadn’t seen Meredith since we were both graduate students a long time ago.

Thanks to an invite from Andrew Shapiro of Lawndale Capital Management, I went out to dinner with a group that included Randi Caplan of Farient Advisors. I’m eager to learn more about their new pay for performance alignment products. I also finally got a chance at the dinner to meet Michael Ferraro and Nathan Ibarra of Proxy Mosaic. I have a feeling we will be hearing a lot more about their proxy voting research and other efforts. I’ve got a small stack of business cards with follow-up notes.

Another huge aspect of such conferences are those member-only forums that are actually discussing the formulation of CII positions, such as discussion by the International Governance and the Activism committees. Unfortunately, press was barred from those sessions, so I can’t offer much feedback. Frankly, I attended more to keep up on corporate governance developments than to report on CII but I do post a few observations below, which I hope some will find useful. I missed several of the meetings, so this is by no means an overview of the event.

Getting the Right People on the Board

Hosted by PRI & ISS  – How Can Investors, Improve the Director Nomination Process? I had hoped to make it to this session but my flight got delayed. Fortunately, a few people were still there and I was able to get hold of a memory stick with the following:

A couple of interesting highlights re US companies:

I was also interested to see the role of CEOs in direction selection. See table to the right. The director nomination process has long been near and dear to me. Les Greenberg and I proposed a rulemaking on proxy access in August 2002.

Entrenched Managers and Directors will only improve corporate governance when they can be held personally accountable, e.g. voted out of office and replaced by candidates nominated by Shareholders.

I then worked with several retail investors on model proxy access proposals that would give a limited role to relatively small retail investors. Unfortunately, we were unable to win endorsement from ISS, Glass Lewis and the large funds, so I have now largely reverted to the 3yr./3% model that has been getting endorsed and passed. However, I’m still holding out for more than 20% of the board.

This year, with the help of John Chevedden, we are introducing what we hope will be a better mechanism to move toward a diverse board than previous proposals limiting tenure or age through our Reduce Director Entrenchment proposal, recently submitted to Costco. The resolved clause reads as follows:

RESOLVED: Shareholders request adoption of a bylaw that would require at least 67% of the board of directors to have less than 15-years total Costco director tenure. This would include a provision that management would have the discretion to implement an orderly return to this requirement should there be a temporary deviation in meeting this requirement.

Actually, the proposal to Costco is overgenerous. I’ll be looking to introduce it something similar at any company in my portfolio where more than two-thirds of the directors have served for 10 years or longer and the board shows other signs of stagnation or entrenchment. Per David A. Katz, Renewed Focus on Corporate Director Tenure:

ISS has stated that it will use corporate public disclosures to update ratings on a continuous basis throughout the year. Director tenure will now factor into a company’s rating: ISS views tenure of more than nine years as “excessive” by virtue of “potentially compromis[ing] a director’s independence.” Having long-tenured directors thus may negatively affect a company’s score… 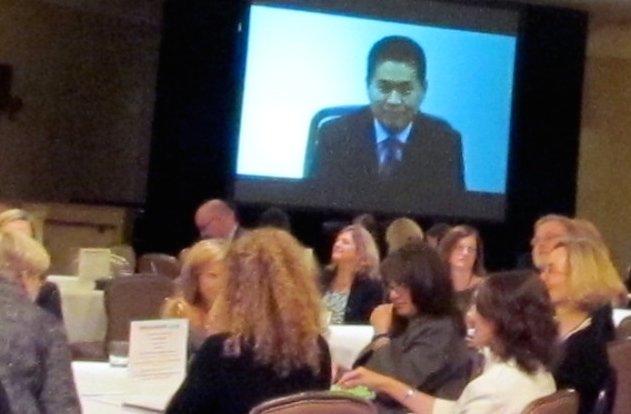 I read several articles and have seen television interviews with Katsuyama. He does a great job of explaining the issues, so my notes here are minimal.

John Ramsey is with IEX in audience. HFT good for some trades but not for those running ahead of your trade. IEX protects investor orders by delaying the orders. Venue is growing rapidly. Has completed funding round to be an exchange. Legal ramifications of front-running. This isn’t front-running your own client but they are front-running another broker’s client. What they are doing is legalized getting ahead of someone else’s client.

Q: My broker should be paying me, since brokers are getting rebates for trades. Exchanges paying rebates for order flow is an issue being looked at. Anytime you’re being paid to execute through someone, it is generally bad for the client. 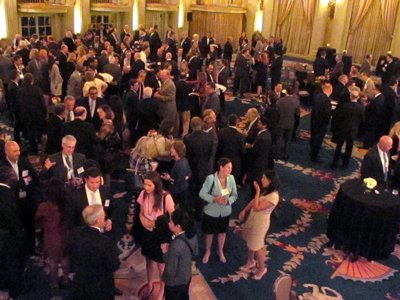