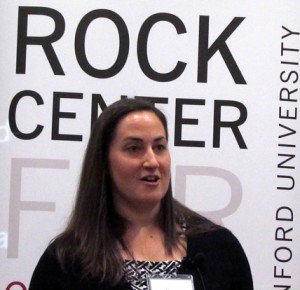 How will 2025 be different from today? What should you innovate, invent, create or build? What steps should you take today to position yourself and your company to flourish in tomorrow’s world? Those were some of the questions that were asked and at least somewhat answered on Tursday, October 16, 2014, as the Silicon Valley Directors Exchange (SVDX) and the Arthur and Toni Rembe Rock Center for Corporate Governance (Rock Center) sponsored a morning conversation with your directors, senior executives, academics and others in the corporate governance industrial complex.

The subject matter expert, discussion leader and facilitator was Kara Sprague, a McKinsey principal. This program, like all SVDX programs, was subject to the Chatham House Rule, so there are no direct quotes here, especially from those in the audience.

As the world approaches 2025 there will be significantly more people. We will be older, richer and significantly more urban with 60% of us living in cities. With regard to richer, wealth accumulation is growing at about 2% faster than incomes. If this continues, the disparity of wealth between rich and poor will increase.

In some ways there will be less diversity – or certainly we will be differently diverse, with far fewer traditional nuclear families (husband, wife, children in same household) as a proportion of the population.

There will be at least 24 cities of 10 million people or more but more than 50 online communities of 10 million or more. and at least 10x more objects connected to the grid. 1/3 of the population will be digital natives (born after internet). By 2029 computers will be smarter than us (I think Watson‘s already smarter than me, at least when it comes to playing Jeopardy).

The difference between getting it right and wrong between 2014 and 2025 is about 16% GDP. 2.4% growth vs 3.9% growth. I missed how that was arrived at. It seems to me the spread for global warming alone could be that much – although we count all that money we spend fighting hurricanes, floods and fires as contributing to GDP, instead of reducing it.

Emerging markets have already become the primary driver of GDP growth. The cross-over was about 2007. Agricultural improvements have increased productivity and has driven a migration to the cities where there is increasing competition for jobs.  People are opting for smaller families and there is more output per worker, increased spending and investment. Prices have been declining in developing countries but that is leveling off. 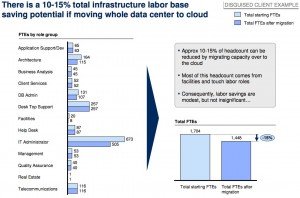 The number of dependents is growing faster than workers, especially in the more developed economies.  Look how much investment is going into computer power but will there be diminishing returns? Technology has bee driving productivity growth in US. By 2008 there were already more connected devices than people. By 2025 we will have 50+ billion connected devices. Biological developments are moving quicker than Moore’s law. 13 years ago it cost $3 billion to sequence the human genome. Today the cost is approaching $1000. See Technology: The $1,000 genome. 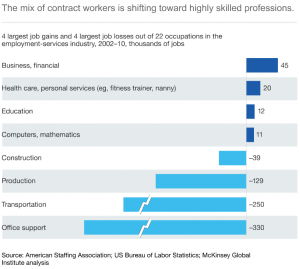 Volitility of US GDP increasing partially due to interconnectedness. Global portfolio more difficult to offset US downturns since the world’s economy is more and more in sync. It is taking less and less time to reach 50 million users. Life of companies is decreasing. Expected life on the S&P in 1958 was 61 years.  In 20011 it was 15 years. Real output per worker increasing but employment is decoupling… especially wages per worker. Only the poor and those with graduate school seem to be doing better.  Most are declining. Germany highly values vocational degrees. Middle third incomes decreasing in all developed countries.

Only 16 languages are growing; use of the rest is shrinking. Nuclear families (with child under 18) now constitute less than 1/5 of household units. 40% of children are born to single parent.

Alibaba site hosed more than 1/3 of adult population in 2013 on singles day (some sort of cupid day).  Market for cruise ships and nursing homes is growing. 2 in 5 US children have used a tablet before they could speak. Commodity prices shooting through the roof, although there was a lot of discussion on that in the room with oil prices declining and more coal going offline. Solar power taking on larger portion of energy production. Huge productivity increases in corn yields over the last 50 years.

Government debt and healthcare are taking increased proportion of the budget. Fiscal balances going down everywhere in developed countries.

My Takeaway for 2025 (I’m sure everyone’s was different): With the shortening life-cycle of businesses, the average director may serve for 2/3 of the life of the company. Get thinking about the future as a board or not only your time, but the company’s time, will be short. Serious self-evaluation is needed. Look beyond retired CEOs for your future directors. Current or former CIOs who are expert in mining and protecting big data might be more appropriate. Accelerate the metabolic rate of corporate governance. Communicate with your shareowners and stakeholders. Get agreement and alignment on the board regarding the forces your company will face over the next ten years so that you can plan to make the future, not simply react to it.

Extra Credit: Here’s What 2025 Will Look Like, Disruptive technologies: Advances that will transform life, business, and the global economy, Research from McKinsey Global Institute

Kara Sprague is a principal with McKinsey’s business technology office in San Francisco. Kara co-leads McKinsey’s global cloud practice and is a core leader in McKinsey’s software and services and IT infrastructure practices. She focuses her time on serving software product and service providers, specializing in technology disruptions (e.g., cloud computing, big data, mobility, cybersecurity) and has substantial experience in corporate and business unit strategy, product and services strategy, go-to-market and business-building. Kara is also a core leader of McKinsey’s internal digitization effort, a multi-year program to modernize the way McKinsey uses technology to delight end-users and improve efficiency and effectiveness of its internal processes. See McKinsey on High Tech Podcasts.

Review: The Rise and Fall of Homo Economicus
Will Corporate Elites Attack Public Opinion Next?