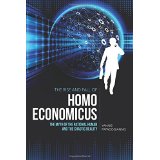 The Rise and Fall of Homo Economicus: The Myth of the Rational Human and the Chaotic Reality by Yannis Papadogiannis deserves wide circulation for documenting the failed state of economics as science. Humans are a far cry from the rational creatures mainstream economics assumes. Economics as a science will never be as mathematically precise as Newtonian physics. And, of course neither will physics.

Papadogiannis does an excellent job of walking lay readers through the history and fallacies of modern economics, presenting findings from sociology, neuroscience, and elsewhere that have led to an incomplete rise in behavioral economics, although we are still far from a paradigm shift.

If I had not read and reviewed Economics of Good and Evil: The Quest for Economic Meaning from Gilgamesh to Wall Street, by Thomas Sedlacek, I would spend a great deal more time reviewing Papadogiannis’ book, which is also excellent.

To its credit, the The Rise and Fall of Homo Economicus can easily be read in an afternoon, while Sedlacek’s took much much longer, at least for me. Sedlacek does a much better job digging out the origins of economics. For example, in the story of the Jewish nation Sedlacek encounters the first notion of economic cycles. The pharaoh’s dream of seven fat and seven lean cows was the first “macroeconomic forecast.” Joseph interprets the pharaoh’s dream and through taxation saves one-fifth of the crop in good years to be used in bad. Perhaps Keynes listened in church.

While Sedlacek mentions Adam Smith’s Theory of Moral Sentiments where he makes clear that man is not a rational actor but is primarily led by emotion, Papadogiannis focuses more of the “invisible hand” mythology and doesn’t provide as full a picture.

However, although Sedlacek subtitle implies his tour de force will continue from Gilgamesh all the way to Wall Street, it is more like from Gilgamesh to Keynes. Papadogiannis does a better job of continuing the story from there, tying precise measures of irrational assumptions to the cause of the great recession.

Both books get to much the same place. As Sedlacek notes, math is “pure tautology.” It leaves out the soul, love and values. Human behavior is often badly predictable. Scientists too often forget the assumptions and qualifications of their arguments, if they ever recognized them. “Rationality is nothing more than hardened emotion… Our language is nothing other than ‘lingual rounding off’ of subjective emotions to the closest term available.”

Both think we are expecting too much from economists. According to Sedlacek:

They are expected to perform interpretations of reality (as if capricious Olympus has been replace by capricious Wall Street), give prophetic services (macroeconomic forecasts), reshape reality (mitigate the impact of the crisis, speed up growth) and, in the long run, provide leadership on the way to the promised land.

In The Rise and Fall of Homo Economicus, Papadogiannis sees too much hubris, and hopes economists will be slightly less ambitious:

This is where the new starting point for economics probably lies: in abandoning the lofty targets of maximization, optimality, and equilibrium, and instead developing an “economic engineering ” designed to solve problems such as unemployment, instability , inequality, resource allocation, poverty, development, productivity growth, and so on, which are testing and plaguing the lives of real people. As Adam Smith wrote, “No society can surely be flourishing and happy, of which the far greater part of the members are poor and miserable.”  Similarly, in our own era, we can say that global prosperity and growth cannot be sustained and increased in a world where the majority of people live in hunger and misery.

Both books recognize that economics is not something separate and apart from us. We design our own economic realities as surely as architects design our buildings. Both Sedlacek and Papadogiannis can help move us to a more secure footing, if they are widely read and discussed. The science of economics is better built based on real behaviors, rather than assumptions… even if real behaviors aren’t nearly as predictable.

Video Friday: Board Education & Kerstetter Moves On
Pay it Forward for the World of 2025