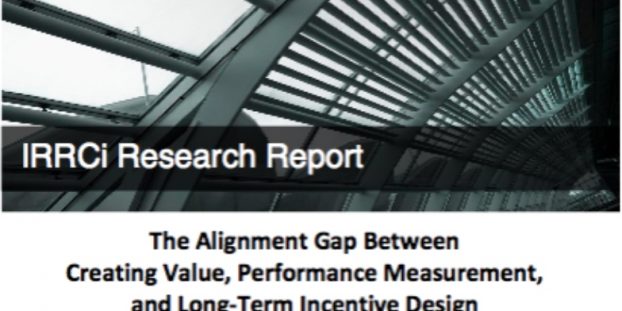 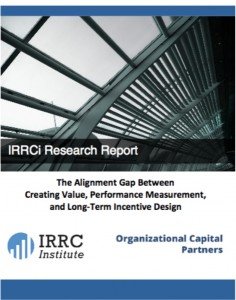 Total shareholder return (TSR), is the most frequent metric used to pay CEOs for performance. The authors of this excellent study from IRRCi believe CEO pay should, instead, be linked to the cost and future value of capital.

In 1993, Congress amended the tax code to tie executive pay to “performance” metrics. To be a deductible business expense, pay had to be linked to performance. Stock price was an easy proxy for performance and the link was acceptable to the IRS. Before the amendment, in 1991, average CEO pay at large public firms was 140 times that of average employees. By 2003, it was approximately 500 times. Whereas equity-based compensation at such firms was zero percent in 1984, it climbed to 66% by 2001. The percentage of CEO pay from stock option grants rose from 35% in 1994, to 85% by 2001.

As the authors point out, “total shareholder return is, by far, the most dominant performance metric in long-term incentive plans.” Yet, increased TSR often has little to do with actually growing a business for the long-term. The rise of fall in stock price generally has little to do with CEO effort. When there is effort involved, rewards come quicker through cost-cutting (firing employees, reducing R&D), stock buybacks or financial engineering than by developing new products, training staff or increasing sales.

For the vast majority of S&P 1500 companies, there is a major disconnect between corporate operating performance, shareholder value and incentive plans for executives.

The study details an over-reliance on accounting metrics that do not measure capital efficiency, and how total shareholder return obscures a line of sight to the underlying drivers of economic performance. Moreover, economic performance explains only 12% of variance in chief executive officer (CEO) compensation.

The report finds that:

The study suggests that the majority of companies could enhance long-term value creation and long-term incentive plan design by:

The CFA Institute recently issued a report on proxy access that is now being cited in almost all proxy access proposals submitted by shareowners. For example, here’s what I put in a proposal to EBAY: CFA Institute’s Proxy Access in the United States: Revisiting the Proposed SEC Rule found proxy access:

I would love to see this report from IRRCi used similarly when shareowners propose additional metrics be added incentivize long-term value creation by corporate executives. Expect push-back. For example, here’s a no-action request from Apple ($APPL) on pay methods. Apple wants the SEC to throw it out as interfering with “ordinary business.” While Marco Consulting and As You Sow don’t raise the same issues as raised in the IRRCi research, expect companies to use many of the same arguments in keeping such proposals off the proxy. Let’s hope ISS, Glass Lewis, Equilar, GMI and others start offering more of the type of research exemplified by the IRRCi study to their clients.

According to the report, only 17% of companies specifically disclose return on invested capital or economic profit as a long-term performance measure for long-term executive compensation. Logically, if we want to ensure our investments are put to good use, the rest of the pay plans should be voted down. How do we identify such companies if our advisors don’t provide the analysis? The first step is to ask them to analyze how well CEO pay is incentivized in terms of creating economic value and efficiencies.