Here’s one of the most interesting proxy proposals I have seen so far during this new season. I wasn’t aware of similar resolutions filed by Zevin until recently notified by Timothy Smith. If BNY Mellon is a PRI signatory, why are they consistently voting against what PRI stands for? Let’s see more proposals like this. It is like calling out green-washers for polluting. 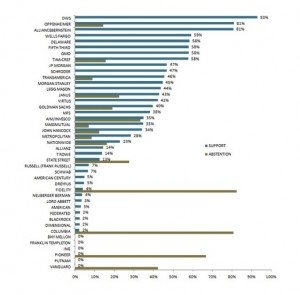 BNY Mellon has almost half of its business signed up as a PRI Signatory but as far as we can see their voting record seems to be consistently a No vote on social and environmental issues. Zevin Asset Management has filed similar resolutions this year and last.

We are hopeful such a resolution will prompt an examination inside the bank which interestingly has a solid Sustainability report which proudly describes their growing involvement  in ESG Investing. We believe this is a creative way to press investment firms that are PRI members to insure their proxy voting is consistent with that pledge to integrate ESG into their investment and engagement decisions.

Request For A Review Of Proxy Voting At BNY Mellon

Bank of New York Mellon is a respected leader in the financial services industry with over $1.6 Trillion in AUM and a long track record of responsive service to its investment clients.

As part of its fiduciary duty, Bank of New York Mellon is responsible for voting proxies of companies in which it holds stock on behalf of clients. However, its proxy voting record seems to ignore its environmental positions and the impact of key environmental factors on shareholder value. We believe a thoughtful fiduciary must carefully review the economic rationale for all proxy initiatives.

To the best of our knowledge, Bank of New York Mellon uniformly votes against most if not all shareholder resolutions on social, environmental and climate change issues, backing management recommendations even when major proxy advisory services, such as ISS, support such resolutions with a clear, economic rationale.

For example, increasingly investors around the world acknowledge the potential for climate change to affect long-term business success. Pension funds, investment management firms and other investors with over $90 trillion in assets under management support the Carbon Disclosure Project, an organization calling on companies to disclose their greenhouse gas emissions and reduction plans.

In 2013 approximately 150 shareholder resolutions were filed at companies facing a potential, significant business impact from climate change. Many of the resolutions simply asked for more disclosure, noting that thousands of companies globally report on their carbon emissions and steps they are taking to reduce them. Bank of New York Mellon voted against such resolutions, in contrast to investment firms such as Goldman Sachs, Oppenheimer, Alliance Bernstein and Wells Fargo, which voted for many such resolutions.

We are disappointed that our proxy voting record does not reflect the company’s own commitment to climate change or other social and environmental factors with the potential to impact long term shareholder value.

Shareholders request the Board to initiate a review of the Bank’s Proxy Voting Policies, taking into account our fiduciary duty, the Bank’s own corporate responsibility and environmental positions as well as and the fiduciary and economic case for the shareholder resolutions presented. The results of the review conducted at reasonable cost and excluding proprietary information, should be reported to investors by October 2015.

This review should help update the Bank’s proxy voting policies.