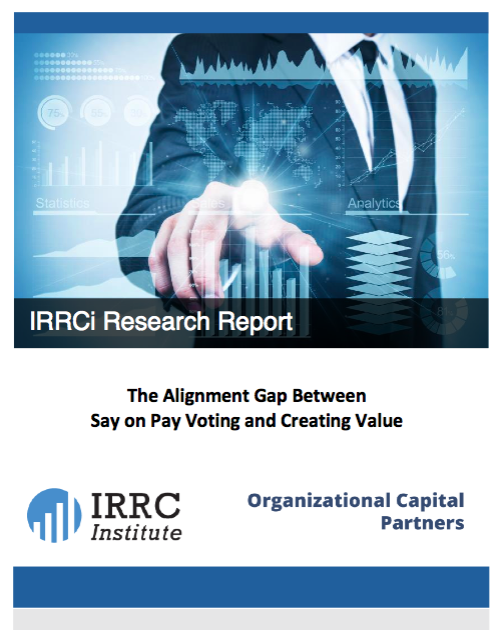 A new study finds that economic value creation is not a major factor in institutional investors’ Say-on-Pay voting, nor in the recommendations of the two largest proxy advisors that counsel investors how to vote. The research reveals that there is no material difference between institutional investors’ Say-on-Pay voting for those companies that create economic value as compared to those that destroy value.

The Alignment Gap Between Say on Pay Voting and Creating Value is authored by Organizational Capital Partners and was commissioned by the Investor Responsibility Research Center Institute (IRRCi). It analyzed the most recent Say-on-Pay votes for more than 100 institutional investors with approximately $13 trillion in total global assets under management at a sample of 128 S&P 1500 companies. Download the study here.

It’s time for institutional investors to step up and recognize that they also contribute to short-termism and sub-optimal value creation. The report suggests that using value-based performance metrics such as ROIC as part of Say-on-Pay voting analysis would help move the focus of executive compensation from short-term alignment with stock market swings to long-term corporate economic performance.

In the U.S., Say-on-Pay is an advisory vote by shareholders on the executive compensation design of named executive officers, including the CEO. Institutional investors and proxy voting advisory services may consider a broad range of factors in their overall Say-on-Pay voting decision. This might include compensation policy, change in control provisions, internal pay equity, use of performance metrics, performance analysis and pay-for-performance alignment as measured by total shareholder return (TSR). Some institutional investors may also use the Say-on-Pay vote as a way to communicate their evaluation of the company’s strategy, business model and performance.

This report looks at how more than 100 of the largest mutual fund families in the U.S. cast those votes for some of the largest value creating and value destroying companies in the S&P 1500 over 5 years. In the aggregate, those fund families control more than $11 trillion in global assets under management. In addition, the report data set includes 11 of the largest North American pension funds with nearly $2 trillion in assets under management, as well as the voting recommendations of the two largest proxy advisory companies (Institutional Shareholder Services and Glass Lewis) that are widely considered the most resourced and sophisticated Say-on-Pay voters and advisors.

The research identified that 85% of companies did not disclose any type of future value type performance metrics such as innovation as part of long term incentive plan design. It also detailed an over-reliance on accounting metrics that do not measure capital efficiency, and how TSR obscures a line of sight to the underlying drivers of economic operating performance.

I consider these two reports from IRRCi and Organizational Capital Partners to be two of the most important reports of the year. The third very important 2014 report is the CFA Institute’s Proxy Access in the United States: Revisiting the Proposed SEC Rule, which found “proxy access has the potential to enhance board performance and raise overall US market capitalization by between $3.5 billion and $140.3 billion.”

The Investor Responsibility Research Center Institute is a nonprofit research organization that funds academic and practitioner research that enables investors, policymakers, and other stakeholders to make data-driven decisions. IRRCi research covers a wide range of topics of interest to investors, is objective, unbiased, and disseminated widely.