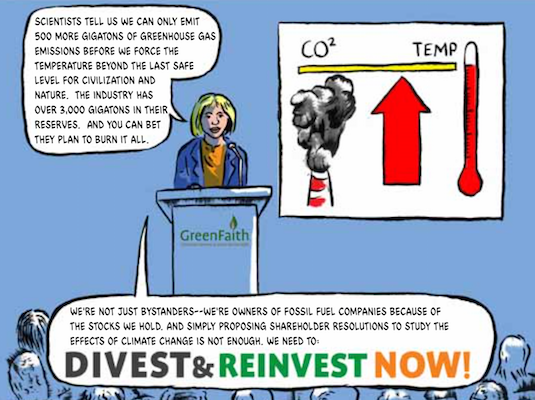 Lucia Von Reusner (Green Century) – Palm oil production leading driver of deforestation. One of the most cost-effective opportunities for greenhouse gas reduction. 2 years ago convinced Starbucks to use only sustainable palm oil. Pressed consumer brands. Kellogg joint venture with Wilmar palm oil. Kellogg’s brand could be hurt. Got on a quarterly earnings call and asked about palm oil. Bloomberg picked up. Tony tiger protestors endangering Sumatran tiger. Filed proposal. Coordinated $250B asset letter to adopt sustainable. Wilmar did a turnaround. Finalized negotiations with K for sustainable pam oil. 60% of supply chain now covered Then mobilized $600B in assets and got commitments from many of the rest. Wilma’s commitment will avoid 1.2 gigatons of carbon pollution. Push to restore deforested land. 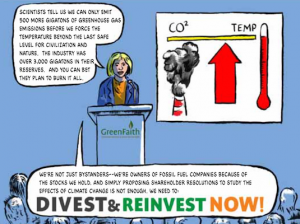 From Chapter 1 of Green Faith Comics

denominations.  Is this a private fight or can anybody get involved. Faith brings moral fiber, less money. What’s our equivalent of the Sullivan Principles? Clear verifiable carbon reduction – stop funding skeptic science. Need for restitution or remediation – paying for damages. If they don’t, they will end up in court. Tie exec compensation to execution on those goals Growing edge of divestment needs to be on the reinvestment… earlier stage clean energy investment in the developing world. Worker owned models. Spread wealth while creating wealth.

Publishing a comic book on divestment and reinvest. Download Chapter 1 and watch for Chapter 2, which should be out soon.

Are we getting any traction at Chevron? Liability around climate change? Need to contact insurance companies. Grand bargain. Swiss Re – Strong limits, wiping slate clean, restitution.  Demand. They (Chevron) are betting $38B a year that demand for oil will continue to rise. Shifting investment might be a good goal. Spend less on carbon. 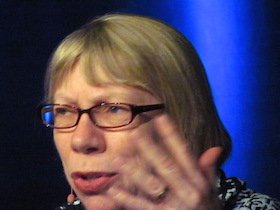 Calvert principles for women 10 years old. Barbara Krumsick retiring after 17 years. Standing ovation. There won’t be a letter on John’s seat when he starts. George Gay had left her a letter for her first day saying all the things wrong with Calvert.

Barbara Krumsiek, Chair, President, and CEO of Calvert Investments, Inc. has been honored as the recipient of the 2014 SRI Service Award which was presented last week at The SRI Conference, the longest-running annual event of its kind in the world.

The SRI Service award recognizes one individual each year who demonstrates a range of contributions to the Sustainable, Responsible, Impact (SRI) investment field, including: industry leadership, significant innovations, high standards of ethical conduct, cooperation and communication, and success in expanding the influence of investing for a sustainable future.

More than 550 investors and investment professionals who attended the 25th annual SRI Conference last week had an opportunity to cast a ballot for the recipient of this prestigious award. Votes were counted and the award was presented by the 2013 SRI Service Award recipient, Geeta Aiyer, President and Founder of Boston Common Asset Management, on the final night of The SRI Conference.

After 17 years at the helm of Calvert Investments, Barbara Krumsiek was an excellent choice for the 2014 SRI Service Award. Thanks to her leadership, Calvert is a highly visible leader among investors and investment professionals who are directing investment capital for positive impact. Calvert’s engagement with the companies in which they invest, and their advocacy efforts focused on helping portfolio companies become more responsible corporate citizens, commands the respect and admiration of the entire SRI industry.

This award comes as Ms. Krumsiek transitions from leading Calvert Investments to launching a new research institute focused on advancing the field of sustainable and responsible investing. She noted, “I’m stepping down from day–to–day responsibilities as CEO of Calvert Investments, but I’m not stepping back from my commitment to this industry.”

Ms. Krumsiek has successfully advocated on issues relating to the advancement of women in business including efforts to increase the representation of women on corporate boards. Under her leadership, the Calvert Women’s Principles® were created in 2004, marking the first global code of corporate conduct focusing exclusively on empowering, advancing, and investing in women worldwide.

Ms. Krumsiek has been cited often for her leadership and influence in business. In 2013, she was recognized as one of Washington Business Journal’s Power 100, “Most Powerful Women” by Washingtonian Magazine and won the “Private Sector Woman of the Year” Award from Financial Women’s Association of New York. In 2012, she was awarded the Columbia University Business School’s Botwinick Prize in Business Ethics. Read her full bio here. 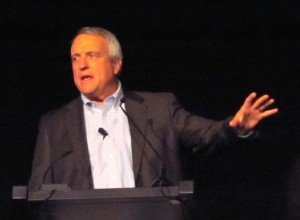 Bill Ritter, former Governor, now heading the Center for the New Energy Economy, Coloardo State University. A lot to be done at the state level since nothing is happening at national level. 2013 President’s climate plan. Was asked what can be done by president without Congress. Powering Forward is the report that something can be done. 30 states have a renewable energy standard (renewable and efficiency standards). Spoke of Republican governors moving ahead. EPA, Clean Air Act 111(d) taking emissions down by 30% by 2030.

Climate action and sustainability is now being baked from the bottom up… from municipalities to states to Congress. Voters in Montana, Utah, Colorado, Wyoming support clean energy. Putting a price on carbon would be the most important thing we could do. Reduce corporate income tax and raise tax on carbon to be revenue neutral. Maybe eliminate drilling tax credit. We won’t get that in the next two years but at least there are conversations. Policy, finance, technology. Lead, set an example. Opportunity to impact people in coastal areas or subsaharan Africa. Looking at regional carbon markets.

“There’s two kinds of people in this world and your not one of them. That’s how I think about Alec.” Wants strong set of protective regulations around fracking. There are engineering solutions. 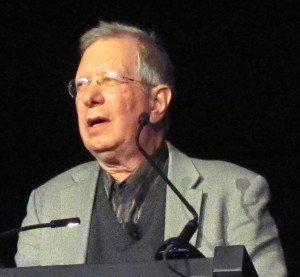 Lincoln Pain – We need more diversity right here at the SRI Conference. We need to create a program that speaks to the whole population. Agenda committee should have 20% color with goal of making it 50% as the country moves from majority white. 60% of all meals are fast food. Increase the wealth divide. SRI needs to address obesity and children’s obesity like tobacco. “Ask McDonalds to sell healthy meals with same vigor — a toy in every salad.” Responsible, Impact – I like impact but truth is it hasn’t just been avoidance it has always been impact. Put together your lists of engagement. Tell your stories of success and failures better on your websites. Need some publicly owned banks. Check out PublicbankingInstitute.org 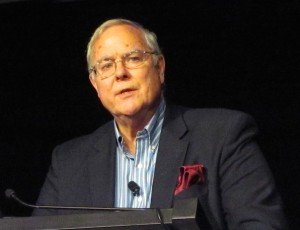 Tim Smith – voice for equality and justice in the face of threatened lawsuits. Paid tribute to other pioneers like Joan Bavaria and Amy Domini. Gave a little of his history with ICCR, advisory board of KMB. Early days. 1971 GM AGM Episcipol Church asked them to leave South Africa — resulted in front page NYTimes article even though it only got a 3% vote. Unleashed a wave a work on diversity, children, etc. South Africa was multi-prong strategy, board-based college campuses, foundations, resolutions filed at hundreds of companies, boycotts, demonstrations, cities and their vendors. Divestment movement is a false description of a whole movement.

Tim Smith (a few years back)

We’re having a version of that debate in fossil fuel discussions. Selling stock isn’t on a higher moral plain that active engagement. One tool isn’t automatically better. We need a multi-pronged approach. Expansion and growth of SRI $90T in assets involved in carbon disclosure project.

Addressed public policy issues SEC, climate change in Washington and state houses. Need to document impact. Josh Humphrey’s paper to be released this week is a big step in that direction. We are not Don Quixotes.  Growing pressure from Commissioner Gallagher, who says we have hijacked the proxy proposal process.  (Thanks for the shout out Tim.) Exceedingly important issues. Global poverty, climate. Walk between hope and despair? Working in a community like this keeps our passions and spirits alive.

I feel so lucky to know Tim and to have followed his work for several decades. His intellect and good manners have helped me and many others in making our inch by inch progress that seems to be adding up.