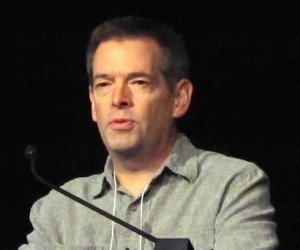 David Berge, Underdog Investments – Spoke of father’s experience where company tried to drive him out. Formative experience. Shift from negative screens to engagement, LGBT issues, local finance, affordable housing. Hard to see predatory lending. Great success of growth of assets under management but we still have to face dangers to the planet.

10% own 74%; 1% owns 40%. 2.3 million in US prisons or jail. We have 25% of world’s prison population. Clearly if we had been more successful there would be plenty of public money for public purposes, other than military.

More investors going 100% CSR.  Community investment has grown. $1.4B to kickstarter campaigns where people get next to nothing back. Investing in women is not a niche $30-40T in intergenerational wealth generation. 63% of millennials want impact investing. $1.8 billion through gust. Big Room and .eco domain name. 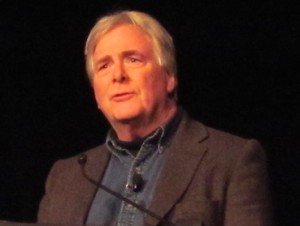 Peter Kinder, The Bell – Told a story about organic farmer needing a loan back in the 1980s for a greenhouse. Got a loan from Vermont bank (loan officer David Berg). Someday Farm. SRI is about aspirations and positive social changes. Best known for founding KLD Research. 1979 Amy Domini introduced him to SRI. Grasp possibilities 1984 Ethical Investing. 1988 Domini Social Index – to reveal the cost that came with SRI.

For a university like ours, which is … a major researcher in environment and alternative energy, we need to be able to put our hand on our heart when we talk to our students and to our alumni and to our researchers and be able to say that we’re confident that the sort of companies that we’re investing in are consistent with the broad themes that drive this university.

Introduction: Amory spotted a typo… megawatts was became negawatts… and the rest is history. 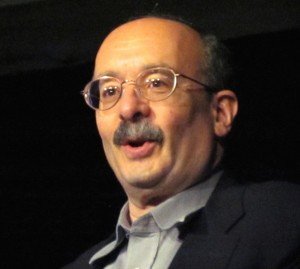 Policy changes can be done administratively or at the state level through PUCs. Business can go around Congress. “If a problem can’t be solved, enlarge it,” said Eisenhower. Carbon fiber cars need less force to move them. Sales of ultralight vehicles would take off with feebate programs that subsidize purchase through taxes on oversized, overweight, inefficient cars. The shift from gas to electric autos will be like the shift from typewriters to computers. VW is now making 235 mpg plugin hybrid.

Lovins passed around a bowl made from fibers  6 to 12 times stronger than steel and much lighter. There are Negabarrels of oil under Detroit if we just apply our knowledge of energy efficiency.  Walmart has tripled the efficiency of their trucks and planes. Military R&D, shared with companies, can eliminate our need to protect the Persian Gulf. 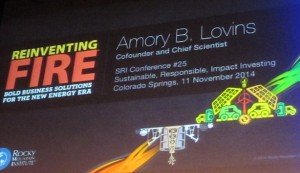 3/5 of electricity runs motors. Fat short straight pipes rather than narrow crooked pipes saves 20%. Radically efficient industrial redesign retrofit saves 30 to 60%(?).  Germany now gets 25% electricity from renewables.  Many are getting 50% from renewables – Denmark, Scotland, Portugal, among others. If distributed generation can compete fairly, you can get most of the power nearby. Focusing on outcomes, not motives, will help solve the problem.

Lloyd Kurtz, chief investment officer at Nelson Capital Management, introduced Allen Ferrell of Harvard Law who won this year’s Moskowitz Prize with his “Socially Responsible Firms.” Harvard Law blog has post with a good summary. Kurtz mentioned that Robert Monks spoke to conference about 10 years ago urging more emphasis on corporate governance. He argued that if you can’t trust the management team, then it would be difficult to do social investing. Management teams deploy the capital, ensure return, invest, create the double bottom line social good. But, sometimes they steal it.

The paper was a joint project between Allen Ferrell, Hao Liang and Luc Renneboog. Ferrell is on advisor committee for HMC shareholder voting policies. His experience was that well-managed firms also were more transparent and CSR. Well-managed in one area is generally associated with being well-managed in other areas as well. (see A Step Toward Responsible Investment @ Harvard and other posts on this blog) 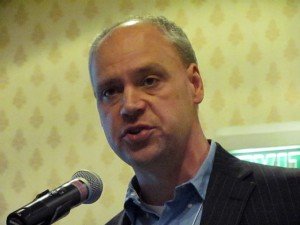 Allen discussed the debate between Adolf Berle (maximize shareholder value; wanted to pin down managers) and E. Merrick Dodd who advocated more of a social responsibility approach. The Berle-Dodd debate of the early 1930s, which concerns the primary purpose of the publicly owned corporation, continues to this day. Berle proposed a strict fiduciary duty for management based on the financial bottom line. Dodd favored safeguarding other stakeholders. The debate helped shape the U.S. securities acts of 1933 and 1934, with Berle winning. A decade after their famous debate,  both switched sides somewhat.

Chicago view – (agency view) is that firms that engage in socially responsibility are spending shareholder money on pet projects of bad managers.

The literature is mixed. However, they are mostly based on ex-post measures, which are noisy proxies. CSR is a governance issue. What is the governance going in to these CSR projects?

Looked at quality of the laws of the country, that should reduce agency problems and should reduce CSR, according to Chicago School.

Trying to explain CSR using MSCI IVA rating. As cash goes up, CSR should go up but in reality it goes down. Dividends and leverage positively related to CSR. Well-managed firms increase CSR.  Tobin’s Q value of the firm. Tobin’s Q x CSR Firms with higher level of CSR, you are more likely to tie management pay to performance. Statistically significant.

As quality of security laws increase, you get better CSR.  Does increasing CSR increase firm value? The correlation positive. That’s the bottom line.

Finds CSR is not induced by agency problems and is consistent with shareholder value maximization. More entrenched firms have less CSR.

From the August 6, 2014 post on The Harvard Law School Forum on Corporate Governance and Financial Regulation, last paragraph:

We find that CSR can counterbalance the negative effects of managerial entrenchment, and lead to higher shareholder value as proxied by Tobin’s Q. Our empirical results (based on an instrumental variables-estimation) suggest that good governance is associated with higher CSR, and that a firm’s CSR practice is consistent with shareholder wealth maximization. Therefore, our findings support the positive stance on CSR, which is also found in Dimson et al. (2013), Deng et al. (2013), and Ioannou & Serafeim (2010, 2012).

From the paper’s summary section:

Our empirical results (based on an instrumental variables-estimation) suggest that good governance causes high CSR, and that a firm’s CSR practice is consistent with shareholder wealth maximization…

If we take the evidence in this paper at face value, several policy implications emerge for the improvement of corporate governance, particularly in the area of corporate social responsibility. Undoubtedly, governments have their responsibility of dealing with market failures and externalities, but the government may not always be incentivized and effective in achieving this goal—governments can be corrupt, inefficient, and even predatory to private sectors (Shleifer and Vishny, 1998), in which case they fail to provide public goods. Therefore, corporate social responsibility in private sectors—the private provision of public goods (Kitzmueller and Shimshack, 2012)—becomes necessary for preserving social welfare. While many researchers believe that such private provision of public goods may be associated with agency problems that divert shareholder wealth and even undermine the foundations of capitalist spirits, we cast doubt on such belief. Corporate governance reforms should take into account of such positive externalities.

This was an interesting session on a paper that could be quite meaningful for advocates of CSR. For example it could be frequently cited by funds managers and financial advisors in convincing people to invest in more responsible companies. I could also be cited by those submitting shareholder proposals. I wish there had been less emphasis during the session of methodology and more on how the findings from this important study can be put to use. To be fair to organizers, the Amory Lovins presentation went 30-45 minutes over (as I recall), so that cut into time available for this valuable session.

As if the paper by Allen Ferrell, Hao Liang and Luc Renneboog wasn’t enough, another recently released paper by Indrani De and Michelle Clayman and The Benefits of Socially Responsible Investing: An Active Manager’s Perspective found a clear relationship between ESG ratings and stock returns. Higher return companies in aggregate had better ESG ratings. There was a strong negative correlation between ESG ratings and stock volatility, and this relationship was stronger when market volatility was higher. This implies that asset managers can get diversification benefits by choosing better ESG stocks and this diversification benefit strengthens when markets are more volatile. The correlation between ESG rating and risk-adjusted return turned significantly positive in the recent years and this positive correlation strengthens further by excluding the lowest ESG stocks. 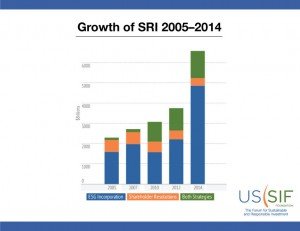 During the conference I also attended a breakfast meeting for US SIF members and prospective members. The Forum for Sustainable and Responsible Investment is the US membership association for professionals, firms, institutions and organizations engaged in sustainable, responsible, and impact investing. US SIF and its members advance investment practices that consider environmental, social and corporate governance criteria to generate long-term competitive financial returns and positive societal impact.

I know the group mostly through what used to be called a listserv… I’m not sure if that’s still the correct term… or is it just a simple mailing list now? (feeling my age)  Anyway, I’ve certainly appreciated this vehicle for keeping up with what this leadership group has been doing for the last 20 years or so. The next US SIF Conference will take place May 4-6, 2015 in Chicago, IL. They also have smaller forums all around the country. The group is active in public policy. Take a quick look as some recent letters.

There was a general discussion of organizational business and various projects that members are working on. I was delighted to learn some members are working on getting the Thrift Savings Plan opened up to include SIF investment options. That’s the $400B defined contribution plan for United States civil service employees and retirees. I’ve done some work in California just trying to get the state’s much smaller Savings Plus Program to create links to fund voting records. See Savings Plus: Transparent Proxy Voting Needed. Perhaps US SIF members could help in that effort. Others in the group are working on a sustainable investment online course to be offered through the CFA platform.

Shortly before the conference, US SIF released a new guide, Investing to Advance Women. Here’s a few facts from one little box in the report.

The report has a long list of examples of investment products, by asset class, that focus on women, as well as a great section on shareholder engagement and may other features.

Since the conference, US SIF released the Report on US Sustainable, Responsible and Impact Investing Trends 2014. Here are just a few of the emerging trends noted by the report:

Another feature of the conference were Topic Table sessions during lunch on Monday and Tuesday. I was glad to be the facilitator of two sessions: Proxy Voting Disclosure and Proxy Voting Disclosure to Deferred Compensation Participants. I’m happy to continue to discuss both projects with previous participants or with any interested readers. Below are a few random photos from the conference: 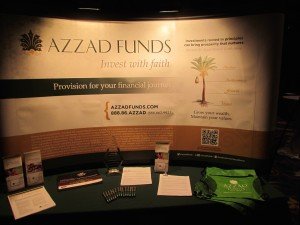 Azzad Funds – one of many exhibits 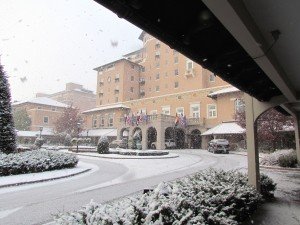 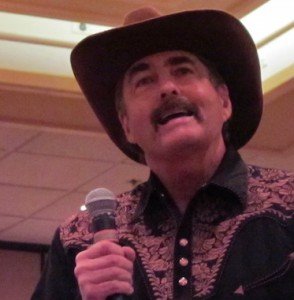