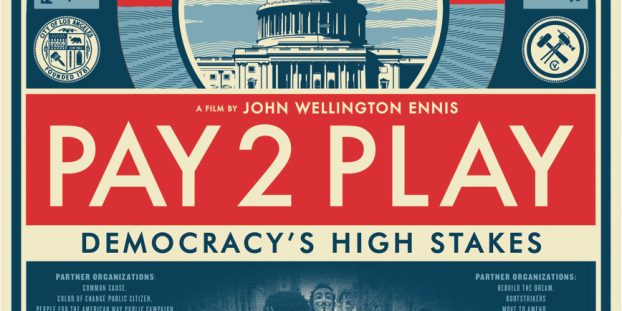 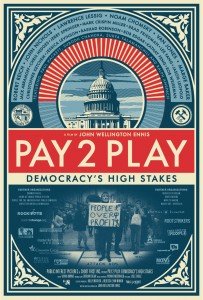 Five years ago today the US Supreme Court held that corporations could spend unlimited  funds on election campaigns in their decision, Citizens United v. Federal Election Commission. Last night I joined about 100 people a local showing of Pay 2 Play: Democracy’s High Stakes.  I highly recommend it. See the film with a group and leave plenty of time to talk what you can do to overturn the impact. The film suggests a number of reasonable solutions but as I have discussed before, the Court’s decision gave investors a special role.

It also said that disclosure

And the court expressed enthusiasm that technology today makes disclosure “rapid and informative.”

Yet, corporations are not required to make the disclosures to shareowners as Justice Kennedy seems to have believed. How can we, as shareowners, hold corporate managers accountable when we do not know what candidates or measures they are supporting? Here are a few ideas for shareholders we have presented over the years.

Some groups have called for companies to disclose their donations. But since the largest share of these secret donations goes to buy expensive TV ads, the focus should be on the major broadcast and cable TV companies. There is another way to end donor secrecy:

Use research to support your position. A new study finds that while nearly 80 percent of S&P 500 companies have disclosed direct political campaign spending policies, 86 percent have no disclosed policies regarding indirect political expenditures. Additionally, only 20 percent of corporations disclose how much is actually spent and which organizations or causes receive the funds. Political activity is strongly negatively correlated with firm value.

Join the many who are filing and co-filing the resolutions seeking comprehensive disclosure of corporate lobbying.

First, the law of corporate governance should expand the fiduciary duties of management to include an obligation to consider the interests of all stakeholders in the firm, not just shareholders.

Second, company boards should be expanded to allow for the election of board members who embody or can credibly speak for the interests of stakeholders. Employee representatives would be fairly straightforward to elect — we could simply issue each employee one share of a special class of stock and have a number of board seats elected by that class. Community leaders in the localities where the company has a major presence could nominate a director; long-term business partners and creditors could be represented as well. We could even require companies to include a “public interest director,” whose special obligation would be to vet company decisions from the standpoint of the public.

Many public employees work to ensure fair elections workplace safety, human rights, fair employment, worker rights, environmental protection and transparency. Private sector employees are often working for the same goals, if not on the job then in their volunteer activities. Yet, often unknowingly, our pensions and deferred compensation programs vote against proposals that strengthen how companies operate in these areas.

What can be done? Most mutual funds use the ISS platform. See an example of reporting using that platform by public pension fund Florida SBA. Others use the voting platform of a competitor, Glass Lewis. See CalSTRS for an example. Ask your administrator to require contractors to provide links to their proxy-voting platforms on their sites that are visible to members. Tell them, we want to see if your votes are really being cast to your benefit as is legally required.