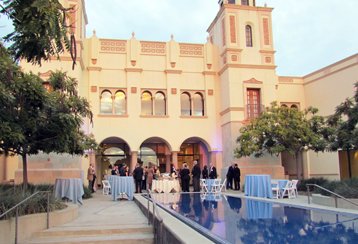 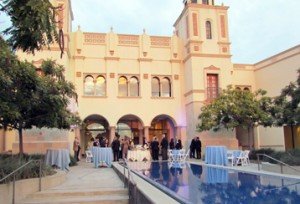 Disclaimer: I’m sharing a few notes from Directors Forum 2015 held at San Diego University beginning 2/25/2015 and ending 2/27/2015. The Forum was held under the Chatham House Rule, so you won’t read any juicy tidbits here. However, I do hope to give readers some flavor of the topics discussed and a little on the general range of opinions. I have take slight liberties with the rule with regard to individual featured speakers, giving some sense of their talks without revealing the specifics of cases raised or providing quoted material of any substance. My notes are sometimes cryptic. Sorry but my time is better spent on other activities. 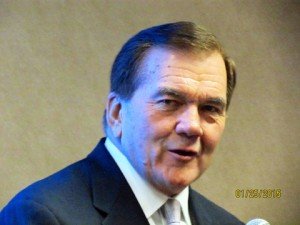 The Honorable Tom Ridge is the CEO of Ridge Global, which helps businesses and governments address risk management issues. He was the first Secretary of the U.S. Department of Homeland Security, another call to service for the former soldier, congressman and governor of Pennsylvania. Governor Ridge was the keynote speaker at the opening dinner.

There will be an estimated 40B devices connected to the Internet by 2020. Flies do not visit an egg with no cracks but most companies and governments have plenty. The Darwinian struggle wasn’t about survival of the fittest; it was about adapting to change. Wants a safe harbor to be able to share information on attacks with government, while limiting liability. Reminded directors of the need for due diligence for cyber vulnerabilities in M&A.

Cyber security is a major permanent business risk. The sun will never set on that risk. Ridge noted SEC Guidance Concerning Cyber Security Incident Disclosure, issued in 2011, as well as President Obama’s Executive Order on Improving Critical Infrastructure Cybersecurity, issued in 2013. We need standards of care because there will be lots of litigation.

As if we weren’t already scared enough, he asked the audience to imagine signing a cyber security certification similar to that required under Sarbanes–Oxley Section 302 to verify internal procedures designed to ensure accurate financial disclosure are in place. I imagined directors and CEOs reaching for the antacid, or something stronger.

ISO standards are important. Here’s a page from DHS and we still had a whole panel on the topic coming up. Some advice from the FBI, FCC and some simplified advice from Ready.gov. “We have the watch; they have the time.” They aren’t going away. The way I see it is that it is always easier to destroy than to build. One of the big takeaways was to not just emphasize the perimeter. Some will get inside, so you need ways to safeguard movement inside your systems as well. 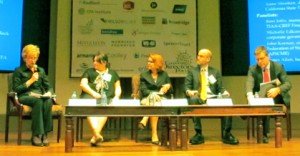 A look at current, top-of-mind issues for shareholders. 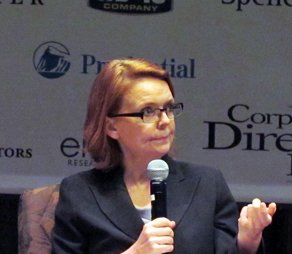 Proxy access and diversity are big concerns. Quality of the board is critical; they are best placed to contribute to the success of the company over time. Increasing level of contact between investors and boards. Dialog should be kept private. Risk governance and cyber security… are boards playing catch up?  Environmental and social impacts, understand risks and how managed.

Political spending and trade association involvement/payments are reputational risks. What process oversees it? What gets disclosed gets managed. 100 or more proposals this year. 160 companies have begun to disclose. 2011 petition to the SEC from Bebchuk and others on the top has over a million favorable comments. Human rights risk assessments in supply chains is another issue. 10 are going to a vote this year. Proxy access, compensation, and political contributions are all hot.

Proxy access analysis by CFA. Event study around announcement of ruling and court decision provided evidence that access is not going to create disruption. Access provides accountability. Encourages engagement between shareowners and boards. There is interest in report by SEC Commissioners.

Compensation – model CD&A template. Original was 4 years ago and is being updated now. Broad support for 3/3 on proxy access. Access is a right in many countries. Boards there have a clear sense of working for shareholders; therefore, it doesn’t get used much. Should be looked at like “in emergency break glass.” Many funds think proxy access shouldn’t be accomplished company by company. We need a mandate, a rule. Somewhere in the

conversation it was revealed that Broadridge could structure the proxy so that shareowners could be forced to vote one or the other proposal. (shareholder or management) However, I asked later and no one has yet inquired about doing that. I don’t see the point myself.

Most CFA members believe political contributions and policies should be reported. Concerns about lack of board turnover, need for outside independent analysis and evaluation. Big proponents of diversity. We have reached the tipping point on discussion but not representation. So far the best tool investors have is a very blunt instrument but voting against Nom/Gov where hasn’t increased diversity. Developing talent. 30% club is UK group where CEOs are signing up their companies. Best approached as a war for talent. 80% of board nominees still come through personal networks.

I have many articles on my site on proxy access and the SEC’s suspension of 14a-8(i)(9), including:

Directors Forum 2015 Session 2: “Can We Ever Get to Consensus on Pay for Performance?” 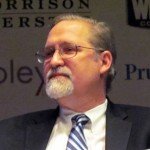 Shareholders continue to be vocal about not getting clear pay for performance plans and directors want to have discretion to avoid homogenized plans—is there a middle ground? 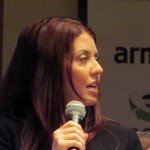 There seems to be consensus on pay for performance. It is the metrics that are in question. What is pay? – realized, realizable, LTI. ROIC vs. TSR. If regulated company, ROIC is driven by regulator. Companies are all different. 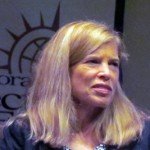 How does the board balance responsibility to stakeholders against the lure of significantly lower taxes and regulation on the global stage? Is the board obligated to maximize shareholder return/tax savings? Link pay to things to be done. Key metrics for business strategies. Accomplish objectives. Understand strategy, including human capital strategy.

IRRCi’s recent report on pay is similar to EVA of 1990s, which was crushed under its own weight. How do your metrics add or sustain value? Compensation plans need to tie to balance sheets. What assets does it take to generate those profits? Is time measurement too short? Longer-term view needed, especially at companies that require long-term planning.  TSR originally came from the demands of institutional shareholders, not compensation committees. Cycles are moving so much more rapidly. Uncertainty of regulatory and tax environment. Need stable tax and regulatory environment. California increased top income tax rate 30%.

Growth and size do matter. Some variance. Turnaround situations? Hard to attract talent if based on IRRCi model. Need longer period of time in CD&A. Here’s what your peers and S&P 500 do. What companies get bold enough to consider new types of peer groups? Competitive marketplace for talent should be informative not a dictate. Does the pay really come down where there is underperformance? 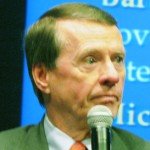 There has been some level of accommodation on the recruitment side but obviously you want to retain your executives. Vagaries of marketplace… exec can often get a reset if they go to another company. If you have to pay a huge amount to bring someone in that messes up the culture… indication of lack of succession planning. Retention pay is a big red flag. Employee engagement metrics. Pay ratios should be those you would see on a team. There should be similar incentive plans throughout the organization. Workplace satisfaction measures.

Credibility of measures questioned. Does it fit with long-term comp methods? How much detail? Realizable pay depends on when CEO cashes out. Reporters won’t do the work to figure out if CEO actually got the pay the papers reported and if they did, how much value did shareholders get. Want more recognition of realized pay. Forward-looking criteria – balance sheet, customer satisfaction.

Severance pay, circuit breaker needed. Boards are handcuffing themselves. Shareholders are upset about pay for failure. Should be weaned away from severance pay. Also points to weaknesses in succession planning. Analyst expectation should be driver of fundamental pay and timeframe. Need standardization for realizable pay; then shareholders could see alignment more easily. Lifecycle and other factors need to be factored in. We’ll will never get to consensus. There is no single metric or set of metrics applicable to all companies.

From my own perspective, the most important recent studies on pay for performance are The Alignment Gap Between Creating Value, Performance Measurement, and Long-Term Incentive Design, authored by Organizational Capital Partners and commissioned by the Investor Responsibility Research Center Institute (IRRCi) and Executive Superstars, Peer Groups and Over-Compensation by Charles M. Elson and Craig Ferrere.