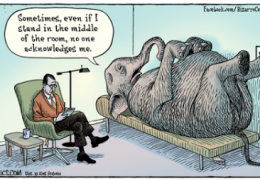 I will be on a panel at the 2/19 SEC Roundtable discussing how to increase retail shareholder participation in the proxy process. The SEC agenda is in bold italics.  Our thoughts on VIFs and CITs are in normal type. Part 1 is here. Part 2 here.

Our laws and regulations have failed to keep up with technological developments in the way we invest. We saw the dire consequences of that fact in the Great Recession. Most investors have not really been buying or holding ‘shares’ since 1975. Additionally, with the dissolution of defined benefit plans, more and more of our investments are channeled through collective investment trusts that are not regulated by the SEC.

The ‘elephant’ in the room is that retail shareholder participation is low, at least in part, because we do not legally own shares. That disconnect between our investments and our legal rights to ownership has consequences. I do not expect this to be much of a topic of discussion at the SEC roundtable. However, in my opinion, if our ‘stock’ investments were in actual shares, instead of derivatives, retail shareholder participation rates in the proxy process would be higher. Corporate elections would be a topic of serious discussion. More thoughtful debate regarding how our corporations are governed would lead to a better alignment of resource allocation and human values.

Not Covered by SEC Questions 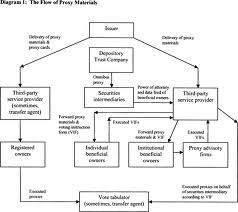 OK, I did raise this issue in Part 1. It is late at night after arriving in DC, so at the risk of repeating myself, here are a few additional notes on the topic. Proxy rules, aimed at protecting shareholders, only apply to 10-15% of shares, since 85-90% of shares are held in street name (including those of institutional investors) and are voted using a VIF. SEC rules haven’t kept up with technology.

The 1975 Act ended the physical movement of securities certificates and the panic. Stocks were “immobilized” at Cede and we began owning and trading derivative rights, instead of shares. The “immobilized” system was supposed to be temporary, until a direct registration system could be developed around “uncertified” or “dematerialized” shares. Legal changes were needed in many states and computer systems needed to gear up and integrate.

That has all happened but too many business earn money off the current system. It has become entrenched because everyone now depends on intermediaries like brokers, banks and Broadridge. Of course, brokers and banks don’t want a direct registration system because they are the only ones who know who owns what at ground level. They have all the names and names are worth money. What we have been stuck with is a system that can’t accurately count ballots because it can’t audit back to the beneficial owner, only to the bank or broker, whom we are supposed to trust to reconcile the voting… and they can do it either before or after the fact. It leads to empty voting and might even facilitate tax evasion (my own paranoid speculation).

Because the rules don’t apply, we have insufficient warnings of blank votes going to the board, biased titles for shareholder proposals and ??what else. Companies don’t know who there shareholders are. Shareholders can’t identify fellow shareholders. Most importantly, shareholders don’t feel like shareholders because they aren’t. Feeling like a shareholder and knowing the voting system is fair, would help incentivize proxy voting.

The SEC should move to direct registration and do away with all the complications involving DTC. Cede. etc. Simplify the system.

As more and more Americans lose defined benefit plans and are shifted into 401(k) plans, a growing proportion of investments are made into CITs. While the SEC requires mutual funds to disclose their proxy votes, there appears to be no such requirement for CITs or for deferred compensation plans as a whole. The number of CITs, which are regulated by the Comptroller of the Currency instead of the SEC has doubled from 1,680 to 3,300 in the last two years. This looks like it is going to be another case, like the shift from proxies to VIFs, where the interests of investors will be left in the dust.

I can not even get my plan to disclose how any of the funds voted, even mutual funds, which are required to do so by law. However, there is no requirement that 401(k) administrators pass through that information. If I know it is a mutual fund I can usually go the mutual fund’s site and get some information but the SEC doesn’t specify a useful format for the disclosure, so I get hundreds, actually thousands of pdfs representing the votes of one fund at each company in their portfolio.

Funds must have to spend a lot of money creating these pdfs. It would be simpler and useful to link to the fund’s voting platform. The fund could put parameters on access, allowing information to be viewed immediately upon voting, six months later or something in between. Changing the disclosure requirements to allow links to voting databases instead of unsortable pdfs would make it encourage more funds to announce their votes in advance of the AGM, especially where doing so might influence other voters, since their databases are likely to be closely watched and their votes scraped, much as ProxyDemocracy.org does. This provides voters with valuable information on how those with greater resources to analyze proxies are voting, allowing them to follow suit.

Since most Americans invest through mutual funds and increasingly CITs, not through investments in individual companies, it is critical that they know how those funds are being voted if they are to feel at all like owners, instead of speculators. If they don’t see how their funds vote, they are more likely to conclude that voting is unimportant if they ever own stocks more directly.

Move regulation of CITs to the SEC? Maybe, if that would help. CITs should be required to disclose and report their proxy votes to their investors in a useable format, facilitating the comparison of voting records.