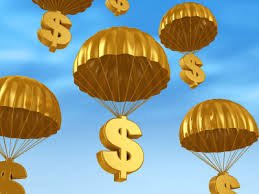 I recently received an email from the AFL-CIO Reserve Fund urging a vote in favor (“FOR”) their shareholder resolutions asking Citigroup (C), Goldman Sachs (GS), JPMorgan (JPM), and Morgan Stanley (MS) to issue a report to shareholders disclosing the dollar amounts of government service golden parachutes – pay their senior executives will receive if they voluntarily resign to enter into government service.

The proposal is a good idea. I hope to be following up with posts on how I voted at Citigroup (C) and Goldman Sachs (GS). I do not own any shares of  JPMorgan (JPM) or Morgan Stanley (MS). Below is the the AFL-CIO rationale for why “government service golden parachutes” do not serve the interests of shareholders.

What is a Government Service Golden Parachute?

At most companies, equity compensation is used as an employee retention and motivation tool.  If you don’t satisfy the employment conditions for vesting, you don’t earn your equity awards.  Why should departing executives receive a windfall payment to enter government service, while remaining employees must continue to meet the vesting terms of their equity awards?

Equity compensation plans should be designed to retain executive talent, not encourage executives to resign from the company.  While entering government service is a laudable career choice, we question why shareholders should subsidize the second career choices of executives. Such an arrangement appears to be a wasteful prerequisite that is unrelated to performance.


The provision of government service golden parachutes also raises troubling public policy and ethical questions.  How do Wall Street investment banks benefit from giving their executives a financial incentive to enter government service? Do they expect to receive favorable government treatment from their former executives? These public policy questions may further harm the reputations of Wall Street investment banks that have already been tarnished by the 2007-2008 financial crisis.

Only in the Wonderland of Wall Street logic could one argue that this looks like anything other than a bribe. Once upon a time, part of the nobility of joining public service was the willingness to make the financial sacrifice. We want people entering public service because they want to serve the public. Frankly, if they need a [golden parachute], I’d rather they stay away. (Fortune, December 5, 2014).

Why is a Report on Government Service Golden Parachutes Needed?

The first government service golden parachute shareholder resolution will be voted on at Citigroup’s shareholder meeting on April 28, 2015 and appears as Item #9 on Citigroup’s proxy card. Similar proposals will also go to a vote at Goldman Sachs, JPMorgan, and Morgan Stanley. For more information, contact the AFL-CIO Office of Investment at (202) 637-3900 or by email.

There will be plenty of other interesting proposals from shareholders. Requesting a report on government service golden parachutes certainly deserves our support.