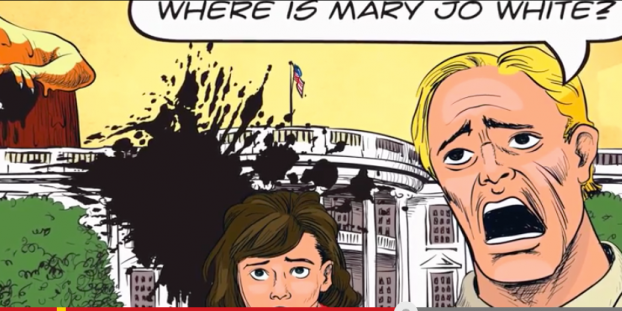 I think most Americans have a very limited attention span when it comes to investing, the SEC and especially corporate governance. When I came across SECDisclose.org earlier this week, I was delighted with a series of videos they have uploaded on dark money and with their byline: Because the S.E.C. shouldn’t stand for “S-E-C-RET.”

In a few paragraphs below lifted from SECDisclose and a press release from the Corporate Reform Coalition, I hope to perk your interest in this project so that you’ll share their links with your friends. I love their campaign. It is very creative. However, one thing the campaign fails to do, at least as far as I could tell in a quick look, is to call their viewers and readers to action. I’ve practically hounded my readers to death on this issue but will do so once again.

The Problem With Dark Money

Right now, there’s no way to be certain about how much dark money is coming from publicly traded companies. In the last election, an estimated $310 million in dark money was spent. The next election will only get more controversial and more expensive. If a corporation you invest in is funding a candidate that could harm the company brand, don’t you want to know before you invest?

What Can the SEC Do About Dark Money?

A petition for rulemaking filed with the agency asks the SEC to create a rule that would require publicly traded companies to disclose information on their political spending to investors. It’s a simple solution that would put investors back into the discussion on political spending, and not overly burden companies because many already keep this information internally.

The petition was later amended.

Why Should the SEC Act on Dark Money?

The SEC’s job is to protect us by arming us with information. The agency has been at the nexus of corporate governance and campaign spending since Watergate. By failing to act in this changed landscape, the SEC leaves investors open to huge risks incurred by reckless corporate political spending.

The following is from An SEC Superhero to Vanquish Citizens United.

With monsters on the loose slinging blobs of corporate cash, frantic investors ask, “Who can rescue us from this dark money menace?” In the crowd, a woman remembers rumors that the chair of the U.S. Securities and Exchange Commission (SEC) has special powers to curb corporate political spending. “Mary Jo White is the superhero we need to end this menace,” another onlooker shouts. “Where is Mary Jo White?”

That’s the narrative of a month-long ad campaign launched today by investors and public interest organizations. The goal is to persuade the SEC to require publicly traded corporations to disclose their political spending.

Since the U.S. Supreme Court’s overreaching decision in Citizens United, corporations have had greater leeway to spend shareholder money to influence politics, but no new rules or procedures have been established to ensure that shareholders – those who own the corporations – are informed of decisions about spending in politics.

Subway travelers who enter and exit Union Station in Washington, D.C. – a major transit hub near the SEC’s headquarters – will see every available ad space taken up with comic strip-style illustrations of frightened investors and voters calling on SEC Chair Mary Jo White to save them from monsters that have taken shareholder democracy hostage. SEC Chair Mary Jo White is depicted as a superhero who can rescue them from dark money threatening their investments, but where is she? The ads will be promoted by a social media campaign centered around #WhereIsMJW and including an animated video.

The ads and video, available at WhereIsMJW.com, are part of a push by the Corporate Reform Coalition to ensure that shareholders and voters know how much corporations spend to influence elections, and which races they fund. The ads were paid for by Avaaz, Public Citizen, Common Cause, U.S. PIRG, Greenpeace, the International Brotherhood of Teamsters and Communications Workers of America.

“From Big Oil to Big Pharma, this undisclosed dark money is rotting our corporate democracy from the inside out, and thousands of citizens are saying no more dirty secrets,” said Joseph Huff-Hannon, senior campaigner with Avaaz. “This cheeky ad campaign is calling on SEC Chair Mary Jo White to defend us and our country from these creatures. We know she can. The only question is, will she?”

“Corporate political spending requires particular investor protections because it exposes investors to significant new risks,” said Lisa Gilbert, director of Public Citizen’s Congress Watch division. Public Citizen is a co-founder of the Corporate Reform Coalition. “Corporate political spending choices may diverge from a company’s stated values or policies, or may embroil the company in hot-button issues. Investors have a right to know what candidates or issues their investments are going to support or oppose.”

The ad campaign comes in advance of the SEC’s spring announcement of its rulemaking agenda. Under former Chair Mary Schapiro, the agency had included a political disclosure rule on its 2013 agenda, but Mary Jo White removed the rule last year, sparking outrage among investors and the public and leading many to ask, “Where is Mary Jo White on this important investor priority?”

A petition requesting the rulemaking was filed in 2011 by a bipartisan committee of leading law professors. A record-breaking million-plus comments have been submitted to the SEC from retail and institutional investors in support of a rule. The comments have come from diverse sources such as John C. Bogle, founder and former CEO of Vanguard; more than 70 current and former members of Congress; five state treasurers; the Maryland State Retirement Agency; US SIF: The Forum for Sustainable and Responsible Investment; and a large group of firms managing more than $690 billion in assets.

This year, investors have filed more than 110 proposals around corporate political activity – more than a quarter of all shareholder proposals filed. At meetings in April and May, shareholders will go up against some of the largest companies in the world, but most will not achieve the disclosure they deserve. The ad campaign is designed to spotlight the fact that SEC Chair Mary Jo White is the superhero with the power to end the menace of dark money in investments.

Please send e-mails in support of the petition to rule-comments@sec.gov. The public is encouraged to submit comments on proposed rules.

All submissions should refer to File Number 4-637 in the subject line. The Commission will post all comments on petitions to the Commission’s Internet website. Before you send yours, you might want to see what others have written.