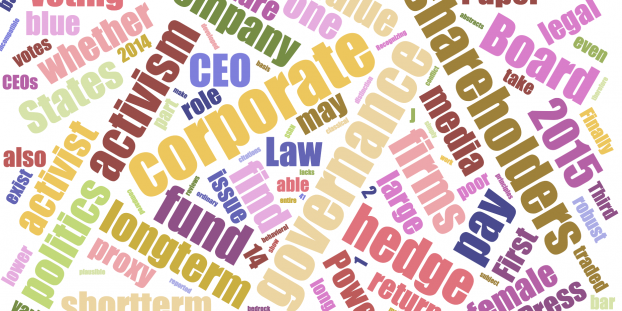 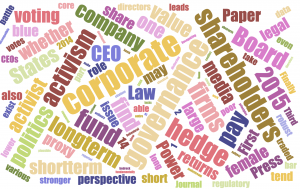 Now that proxy season is finally winding down, I had a few minutes to take a quick glance at recent research on corporate governance and shareholders reported on SSRN. This is part 2 of 3. (Part 1) Below I am simply including a few citations and abstracts of studies useful to shareholder advocates in the US. I would welcome  guest posts on such research from authors, critics or other interested parties. Please contact me via e-mail or by leaving comments below.

Min, Geeyoung and You, Hye Young, Active Firms and Active Shareholders: Corporate Political Activity and Shareholder Proposals (April 30, 2015). Virginia Law and Economics Research Paper No. 15; Virginia Public Law and Legal Theory Research Paper No. 28.
Corporate political activity has become one of shareholders’ top concerns. We examine whether firms targeted by shareholder proposals show different campaign contributions and lobbying activities compared to non-targeted firms. We also ask whether different sponsors of shareholder proposals target different firms depending on the firms’ partisan orientation. Using data on S&P 500 companies during the period between 2007 and 2013, we find that firms that spend more on campaign contributions and lobbying are more likely to be targeted by shareholder proposals. After controlling for firms’ financial performance, governancecharacteristics and ownership structure, we also find that public pension funds and labor unions sponsors are more likely to target Republican-leaning firms, measured by the firms’ campaign contributions. This finding suggests that increasing corporate political activity can intensify a tension between management and public pension fund and labor union shareholders and lead to more activism by these shareholders.
Partnoy, Frank, U.S. Hedge Fund Activism (March 25, 2015). Research Handbook on Shareholder Power, Elgar Press, 2015, Forthcoming; San Diego Legal Studies Paper No. 15-187.
Notwithstanding the focus on hedge fund activism, fundamental questions remain. How much does hedge fund activism really matter? What has academic study contributed to the understanding of hedge fund activism? And what, if anything, does research on hedge fund activism illuminate about the viability of regulation in the area?
This chapter for the Research Handbook on Shareholder Power (edited by Randall Thomas and Jennifer Hill) addresses these questions from three perspectives. First, it assesses the historical development of scholarship on hedge fund activism, from the first attempts to define “hedge funds” and “activists,” and to gather data about both. Second, it examines and critiques one of the “hot issues” that has emerged from the debate about hedge fund activism – the potential separation of voting and economic interests – and offers a new way of conceptualizing that issue, derived in part from tax regulation. Third, it compares regulatory approaches to hedge fund activism in the U.S. with approaches elsewhere. It closes with a discussion of one recent and controversial incident of hedge fund activism in Canada, involving shares of the Telus Corporation, and examines the role of academic research in assessing that incident.
Sharfman, Bernard S., Activist Hedge Funds in a World of Board Independence: Creators or Destroyers of Long-Term Value? (May 14, 2015). Columbia Business Law Review, Forthcoming.
Numerous empirical studies have shown that hedge fund activism has led to enhanced returns to investors and increased firm performance. Nevertheless, leading figures in the corporate governance world have taken issue with these studies and have argued that hedge fund activism leads to long-term value destruction.
In this article, it is argued that an activist hedge fund creates long-term value by sending affirming signals to the board of directors (Board) that its executive management team may be making inefficient decisions and providing recommendations on how the company should proceed in light of these inefficiencies. These recommendations require the Board to review and question the direction executive management is taking the company and then choosing which path the company should take, the one recommended by executive management, the one recommended by the activist hedge fund or a combination of both. Critical to this argument is the existence of a Board that can act as an independent arbitrator in deciding whose recommendations should be followed.
In addition, the Article discusses the implications for shareholder voting when an activist hedge fund interacts with an independent Board. Finally, an explanation is given for why activist hedge funds do not provide recommendations that involve long-term investment.