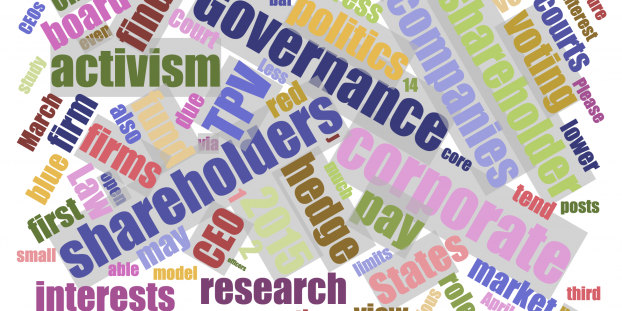 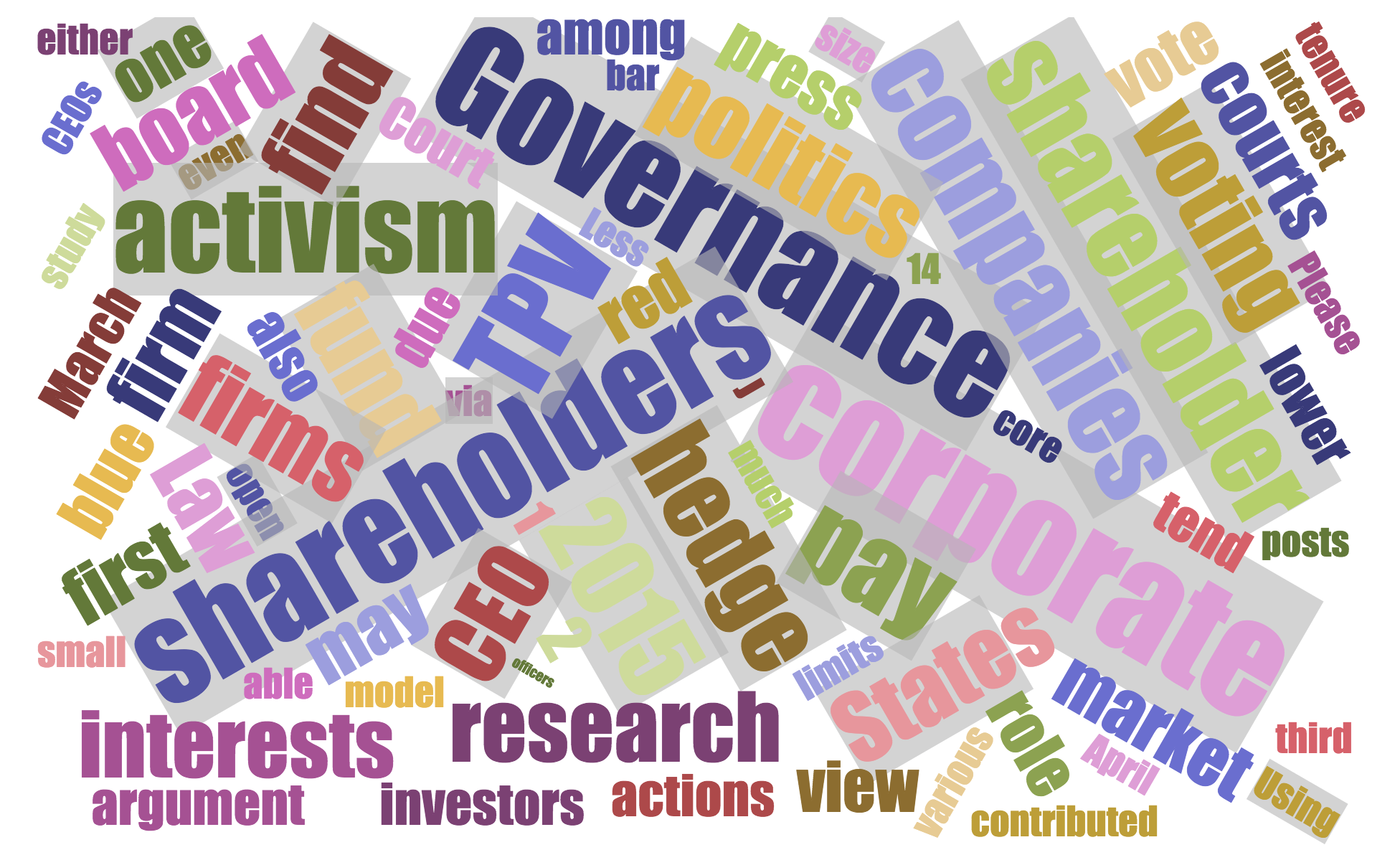 This article analyzes the risk of CEO turnover in US firms over the period 1993–2011. There is an increase in the CEO turnover rate and a 41% decline in median tenure. Where firm performance is poor, CEOs are increasingly replaced, either by the board or in the process of the firm being taken over. US corporate governanceregulations had some success in mitigating the agency problem. In the wake of those reforms, CEO turnover outcomes are more strongly associated with firm performance. The declining CEO tenure may have structural impacts on CEO pay.

addresses these questions from three perspectives. First, it assesses the historical development of scholarship on hedge fund activism, from the first attempts to define “hedge funds” and “activists,” and to gather data about both. Second, it examines and critiques one of the “hot issues” that has emerged from the debate about hedge fund activism – the potential separation of voting and economic interests – and offers a new way of conceptualizing that issue, derived in part from tax regulation. Third, it compares regulatory approaches to hedge fund activism in the U.S. with approaches elsewhere. It closes with a discussion of one recent and controversial incident of hedge fund activism in Canada, involving shares of the Telus Corporation, and examines the role of academic research in assessing that incident.

A movement is growing among commentators in the academy, the bench, and the bar that sees short-term shareholders — especially activist institutional shareholders — as a threat to the long-term best interests of publicly traded corporations. These “long-and-short” commentators argue that institutions with short investment horizons tend to favor short-term corporate governance gimmicks that temporarily “pump up” stock prices but depress corporate value in the long run. As a remedy, they propose that activist institutional shareholders need an accountability mechanism, such as fiduciary duties applicable to officers and directors in corporate law.

The argument’s intuitive mantra — that short-term investment horizon leads to short-term governance — has received considerable purchase among the bench and bar. However, the simple seemingly intuitive connection between short investment horizon and governance horizon is not at all clear when one digs beneath the surface of the assertion. Finance theory would suggest that differences between short-term and long-term value would be quickly eliminated by arbitrage activity. To the extent that there are limits to arbitrage, these limits are unlikely to apply to the type of activism pushed by institutional investors, such as corporate governancereforms. In all, the short-termism perspective developed in law reviews lacks even a plausible basis in any mainstream work in finance, whether classical or behavioral.

In addition, the long-and-short argument is fundamentally incompatible with bedrock principles of corporate law. Recognizing a distinction between the interests of short-term and long-term shareholders would make even ordinary board decisions involve a conflict of interest and therefore subject to entire fairness review rather than the business judgment rule. Such a change would mean paralysis in corporate affairs, as virtually every decision could be challenged in court. This Article predicts that the “investment horizon” debate portends a coming collision of interests that will have dramatic implications for the corporate landscape, including the possible demise of Delaware as corporate jurisdiction of choice.

We study the relation between company corporate governance and company valuation and operating performance around open market share repurchase program announcements. Using an agency cost-based argument we develop a model in which corporate governance and cash payout policies are substitutes. Our model predicts strongly-governed companies will outperform weakly-governed companies after announcing a share repurchase program. We find that announcement period stock returns, long-term post-announcement stock returns, and long-term post-announcement operating performances are all significantly higher for companies with stronger relative to weaker governance. The results are robust to different methodologies, various controls, and for the well-known corporategovernance effect. We conclude that the strength of the corporate governance system is an ex ante indicator of whether the managers announcing a share repurchase program do so to create value for shareholders.

We investigate the association between the media coverage of firms’ CEO pay packages and subsequent shareholder voting on say-on-pay resolutions, and find that negative media coverage is able to predict shareholder discontent over say on pay. When we divide media coverage into coverage in the financial and business press versus coverage in the general press, we find that shareholder voting on say-on-pay resolutions is mainly associated with the articles from the financial and business press. This suggests that the media cannot be considered a homogeneous information source that is equally able to predict shareholders’ voting behaviors. As such, our findings have important implications for studies on the role of the media in corporate governance.

In this review piece for the Oxford Handbook on Corporate Governance, we analyze the generalities and then look at core aspects of corporategovernance that have been, and continue to be, politically influenced and sometimes politically driven: first, the historically fragmented ownership of capital in the United States; second, the postwar power of labor in Europe and its corporate impact; and, third, the ongoing power of the American executive and the American board as due in part to their influence on political and legal outcomes.

Compton, Ying Li and Kang, Sok-Hyon and Zhu, Zinan, Red vs. Blue: Does Female Board Membership Depend on Whether the Company is Located in Conservative or Liberal States? (October 14, 2014).

We investigate whether female board representation depends on the location of the company in conservative “red” states (which tend to vote for Republican candidates) or in liberal “blue” states (which tend to vote for Democratic candidates). We find that female board representation is consistently lower for firms headquartered in red states than for those headquartered in blue states, after controlling for major covariates Including industry, size, and availability of female labor force. We also find that, for both red and blue companies, average female director compensation is lower than that of the male counterpart by about two to four percent.

Critiques of say on pay and say on politics have been couched as constitutional objections based on either the Tenth or First Amendments of the U.S. Constitution. But at their heart, these objections seem less rooted in the text of the Constitution and more inspired by a cribbed conception of shareholders’ corporate voting rights. To untangle who has the stronger legal argument requires a review of how American courts have conceptualized “corporate democracy.” I conclude that as framed by key courts such as the U.S. Supreme Court, the D.C. Circuit Court of Appeals and the Delaware state courts, “corporate democracy” is a capacious enough concept to justify both shareholders’ say on pay and say on politics.

The importance of shareholder activism in widely held public companies is already broadly recognized. Less well understood, however, is the role that activist hedge funds play in public companies with a controlling shareholder, and the common view has simply held that dispersed stock ownership is typically a precondition for activist intervention.This Article aims to fill this gap in the literature by presenting the first comprehensive account of shareholder activism in controlled U.S. companies. Contrary to popular presumption, the Article finds that activist shareholders are also showing up – to surprising effect – at a non-negligible number of controlled firms. Using empirical data and illustrative examples from recent years, the Article unveils the variety of channels through which activism is deployed against controlled companies, and it offers some suggestions for further empowering activists in these companies, such as providing investors unaffiliated with the controllers with the right to elect minority directors.

We explore Time-Phased Voting (“TPV”), an arrangement in which long-term shareholders receive more votes per share than short-term shareholders. TPV has gained prominence in recent years as a proposed remedy for perceived corporate myopia.We begin with theory, situating TPV relative to other corporate voting structures such as one-share-one-vote and dual-class stock. By decreasing the influence of short-term shareholders, TPV may encourage managers to act in the long-term interests of their firms. It may also facilitate controlling shareholder diversification and firm equity issuances by enabling controlling shareholders, who are generally long-term shareholders, to maintain their control with lower levels of ownership. In this respect, it resembles a milder form of dual-class stock, but is more targeted toward myopic behavior.

We then investigate U.S. companies’ experiences with TPV in practice. Due to limited U.S. experience with TPV, our sample size is small from a statistical standpoint. Nevertheless, our findings are consistent with our theoretical analysis. Our ownership and voting data suggest that TPV empowers long-term shareholders, but that it does little to encourage long-term shareholding; this may be due to a lack of investor awareness regarding the few companies that have TPV. In the short term, TPV empowers insiders, increasing their control and creating a wedge between their ownership and control of the firm (though a smaller wedge than is typical of dual-class firms). However, in the long term we find that TPV is associated with reduced insider ownership and control. We see a transition in TPV companies, which are mainly mature, family-owned companies, from a concentrated to a more dispersed ownership structure. Relatedly, we find that TPV is associated with significant insider diversification and the issuance of additional equity.

Overall, TPV firms significantly outperformed the market as a whole; an investor who invested in our TPV firm index in 1980 would have more than six times as much money at the end of 2013 as an investor who invested in the S&P 500. While it is not clear that TPV contributed to this strong performance, we believe that shareholders and corporations should be free to experiment with reasonable TPV plans if they so choose.