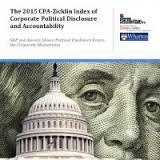 More of America’s largest publicly traded companies are bringing sunlight to their corporate expenditures on politics, the 2015 CPA-Zicklin Index of Political Disclosure and Accountability shows on the eve of a blockbuster election year for political spending.

The Index was released by the Center for Political Accountability in conjunction with the Carol and Lawrence Zicklin Center for Business Ethics Research at The Wharton School of the University of Pennsylvania.

According to Bruce Freed, CPA president:

“The 2015 CPA-Zicklin Index reveals determined steps in the direction of accountability and transparency as principled corporate governance,” said Prof. William S. Laufer, the Zicklin Center’s executive director. “We welcome the disclosure of political spending as an established business norm.”

This additional transparency has come despite fierce opposition from leading business trade associations, Freed added. It comes as polling shows that Americans are voicing alarm over the power of corporations and other wealthy donors to influence politics.

“Greater tracking of disclosure practices leads to greater transparency, and greater transparency means greater trust,” CPA director Charles E.M. Kolb wrote in the Index forward. “It is extremely heartening to see the rapidly growing number of CEOs, companies, and their boards who feel the same way.”

Shareholder proposals work. I encourage readers to download the Excel data (click through on second page) PolDisclosures2015_Index_Data_for_Website and to file proposals at companies with the poorest scores. Need help? See my Shareowner Action Handbook.

Companies increasingly have placed restrictions or are at least disclosing their policies political spending. This is a major change since 2004 when few companies imposed such restrictions or had policies about how they would spend on politics. The 2015 CPA-Zicklin Index found that 124 companies (25%) placed some type of restriction on their political spending. This included restrictions on direct independent expenditures; contributions to candidates, parties and committees, 527 groups, ballot measures, or 501(c)(4) groups; and payments to trade associations for political purposes.

CPA is a non-profit, non-partisan organization created in November 2003 to bring transparency and accountability to corporate political spending. I urge readers to make a financial contribution and/or offer to volunteer to support CPA’s important work.

The Carol and Lawrence Zicklin Center for Business Ethics Research at The Wharton School sponsors and disseminates leading edge research on critical topics in business ethics.

Appleseed Fund: One of the All in For Impact Sponsors
All In For Impact: Proxy Access and Advocacy to Thriveability