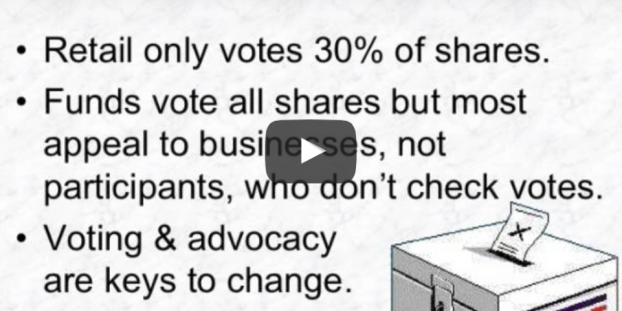 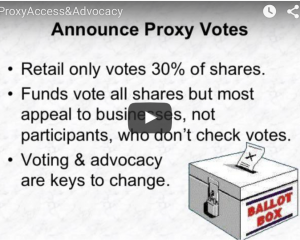 At the recent #AllInForImpact SRI Conference – on Sustainable, Responsible, Impact Investing I presented a “Topic Table.” These are informal gatherings of up to 10 people during lunch. Topics are submitted prior to the conference by any registrant who wishes to lead a discussion on an issue related to sustainable, responsible, impact investing. Mine was on Proxy Access and Advocacy.

I started out with a Calvin and Hobbes cartoon depicting how many people see business today… run by narcissists, producing little of real value and looking to be subsidized.

Dr. Richard Liroff, Executive Director of the Investor Environmental Health Network (IEHN), was one of the participants at our table talk. It was nice to learn of our shared respect for Louis D. Brandeis (Brandeis on Democracy

). Shareholders have an obligation to ensure their businesses operate consistent with public welfare.

Of course we are all well aware of the symptoms of poor corporate governance, such as global warming and the erosion of the middle class in America. We like to think of ourselves as the richest country in the world… and we are fairly high up with regard to average or median wealth. However, that’s primarily because we have quite a few billionaires who skew the average. Take a look at median net wealth – half above and half below. By that measure we are nearly as rich as Slovenia. Most Canadian have twice our wealth, while Australians have close to five times our wealth.

We all know that corporations have enormous power. So much power in fact that we can’t depend on government alone to reign in their excesses. We need to restructure our corporations so they are more democratic. Let’s make corporate ‘elections’ more meaningful than those in North Korea, where one party rules. Yes, they/we can vote… but without real choice.

Most funds are incentivized not to monitor. See my post on Agency Capitalism. Directors, our elected representatives, aren’t working for shareholders as whole people. Fiduciary duty shouldn’t mean maximizing short-term value at the expense of a salubrious environment.

We don’t need “independent directors,” we need directors who are dependent on and accountable to shareowners and to the greater society. Democracy requires accountability.

During the conversation someone mentioned the now defunct MoxyVote.com. At least one at the table wasn’t familiar with their attempt to organize investors, so I’ll post a link to their wonderful little video below. See my post In Celebration of MoxyVote.com. Hopefully, we can someday resurrect their vision and move us all a little further down the road to ThriveAbility. As Bill Baue points out in a recent SeaChange Radio episode:

You all know the classic quip for our field:

John: “My marriage is sustainable.”
Jane: “Oh, I’m sorry to hear that…”

You get it: The notion of “sustainability,” while vitally necessary, inspires enthusiasm like a hairshirt. What we humans really want to do is thrive! The problem sustainability confronts is that the human pursuit of thriving (as currently enacted) wreaks havoc — we overshoot planetary boundaries and erode social foundations.

We need to redial our economy so that we can thrive in a sustainable manner, within the ecological system’s carrying capacity.