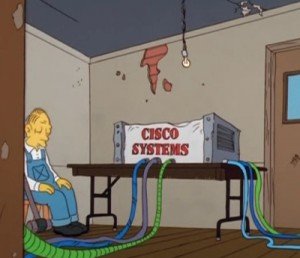 Cisco Systems, Inc. (CSCO) designs, manufactures, and sells Internet Protocol (IP) based networking products and services related to the communications and information technology industry worldwide. Cisco is one of the stocks in my portfolio. Their annual meeting is on November 19, 2015. ProxyDemocracy.org had collected the votes of four funds when I checked. I voted with the Board’s recommendations 50% of the time. View Proxy Statement.

Cisco’s Summary Compensation Table shows the highest paid named executive officer (NEO) was Former Executive Vice President and Chief Financial Officer Frank A. Calderoni at about $27.2M. I’m using Yahoo! Finance to determine market cap ($133B) and Wikipedia’s rule of thumb regarding classification. Cisco is a large-cap company. According to Equilar (page 6), the median CEO compensation at large-cap corporations was $10.1 million in 2013, so pay at Cisco is well above that. Cisco shares outperformed the S&P 500 over the most recent two year period, were even over the latest one year period and underperformed over the most recent five and ten year periods.

The MSCI GMIAnalyst report I reviewed gave Cisco Systems an overall grade of ‘C.’ According to the report:

Performance was below average and pay was substantially above average. I voted against the pay package and the members of the compensation committee: Roderick C. McGeary, Chairperson, Carol A. Bartz, M. Michele Burns, and Brian L. Halla.

I voted against the pay plan and the directors mentioned above. I am also concerned that half the board has served for twelve years or more.

I voted in favor of Cisco adopting the Holy Land Principles. This proposal was a new one to me earlier this year and I was at first a bit skeptical. However, after looking into them, I am in total agreement. These are like the Sullivan Principles we applied in South Africa to help end apartheid. Check out founder Fr. Sean  Mc Manus. Corporations have a role in bringing peace to this troubled area through nondiscrimination. I’m surprised by the abstentions.

Implementation of the Holy Land Principles, which are both pro-Jewish and pro-Palestinian, will demonstrate Cisco’s concern for human rights and equality of opportunity in its international operations.

Of course, I voted in favor of my own proposal for proxy access. According to ProxyPulse, “seventy percent of the more than 80 proxy access proposals voted on this season received majority support from shareholders, averaging 57%.” Proxy access is quickly becoming the norm. Set a Google alert for ‘proxy access’ and every few days you will get an announcement such as the following.

CBL & Associates Properties, Inc. Friday announced that it intends to adopt a proxy access by-law amendment in response to the advisory vote at its annual meeting earlier this year.

While I don’t expect proxy access to be implemented at Cisco for the foreseeable future, shareholders should put this important mechanism in place so it is available when or if the time comes. Stock performance for the latest 5 and 10 year periods lag the market. Cisco’s opposition statement claims:

Proxy access may create the opportunity for special interest groups or individuals with a small minority stake to promote an agenda that is not in the best interest of all shareholders. Proxy access makes it easier for those groups to use the threat of a contested election to seek concessions from Cisco relating to a particular special interest without being faced with the potential costs of a proxy solicitation.

The “threat’ of “special interest” groups mentioned above would only occur where the agenda and candidates being pushed would appeal to a majority of shares voted. In that case, they can hardly be called “special interest.” Think about it. Would it really be bad to have two candidates on the the proxy nominated by shareholders and eleven candidates nominated by the board? That’s the potential “threat.” Others might call it choice. Maybe nominees would start telling us why they are the better candidate.

Readers might want to check out Proxy Access 2016: Market Trends and Shareholder Proposal Developments from Sullivan & Cromwell LLP. I think it could be read as a warning to companies to adopt proxy access now, before they get a proposal using my updated template.

We believe the same logic will apply to proxy access. Companies that resist adoption are likely to be those that need it the most. Please vote in favor of proxy access to ensure Cisco Systems is an early adopter.

Cisco Systems: CorpGov Recommendations Below – Votes Against Board Position in Bold

In the event that a stockholder wishes to have a proposal considered for presentation at the 2016 Annual Meeting of Stockholders and included in the Company’s proxy statement and form of proxy used in connection with such meeting, the proposal must be forwarded to the Company’s Secretary so that it is received no later than May 28, 2016. Any such proposal must comply with the requirements of Rule 14a-8 promulgated under the Exchange Act.