Publisher’s note: I wasn’t going to publish anything today but I couldn’t resist this recent news from Sanford Lewis, Esq. and Sonia Kowai of Zevin Asset Management about a denial of a no-action letter that allows shareholders to hold mutual funds to account. Imagine what the world could look like if mainstream funds lived up to their own hype.

This is the perfect reason for Thanksgiving and is the best news I’ve heard all year. For the first time we have the possibility that mutual funds might be so embarrassed by the wide gap between what they say and what they do that they may actually start voting as their investors would wish. This is a real game changer and could be the start of something HUGE if similar proposals are filed at other fund companies and shareholders hold them accountable.

Climate change is the first issue, and is critically important, but there are other issues to address as well. Many thanks to Sanford Lewis, Sonia Kowal of Zevin Asset Management LLC,, Jackie Cook of Fund Votes, Ceres, First Affirmative Financial Network, and everyone who worked to obtain these critical new rights.

Investor efforts to push companies to act on climate change have been strengthened by yesterday’s Securities and Exchange Commission (SEC) ruling that Franklin Resources, which manages the Franklin Templeton family of mutual funds, will be required to include a shareholder resolution on its 2016 ballot focusing on its poor voting record on climate change proposals. The resolution was filed by Zevin Asset Management, an independent, socially responsible investment management firm, to highlight the contradiction between Franklin’s voting practices and its policy positions regarding climate change. A similar proposal has also been filed by Zevin at T Rowe Price. The SEC’s ruling is especially timely given the upcoming United Nations climate conference (COP21) in Paris and paves the way for shareholders to push other investment companies, including big banks, on their proxy voting records.

Research conducted by Fundvotes, on behalf of Ceres, shows that Franklin Templeton mutual funds’ voting record on climate change issues is near the bottom of the pack among mutual funds. However, in its 2014 response to the Carbon Disclosure Project (CDP), the company states that “Franklin Templeton’s fundamental bottom-up approach to investing, which takes climate change-related factors into consideration, gives the company a competitive advantage by managing risk and opportunities within portfolios and attracting investors…” Franklin’s voting record is all the more striking given that Franklin Templeton Investments has been a signatory to the United Nations Principles for Responsible Investment since 2013. This commitment creates a “green” branding for the Company and signifies a willingness to be publicly accountable for its activities on environmental, social, and governance (ESG) matters.

Given that proxy voting is one of the principal ways in which investors can engage in active management of portfolio risks and opportunities related to climate change, it appears that Franklin mutual funds’ proxy voting record is inconsistent with a proactive approach to climate change. This is in stark contrast to funds managed by investment firms such as Deutsche Asset Management, Oppenheimer, and AllianceBernstein who support the majority of climate change resolutions.

“Franklin’s inconsistency on climate poses a reputational risk to the company, especially given the contrast with many of its competitors,” said Sonia Kowal, President of Zevin Asset Management. “Given the severe threats of climate change to human societies and economies, Franklin’s clients may start to wonder if their investments are in good hands. We hope that other investment companies will now become more thorough and transparent in making decisions on climate related issues.”

The SEC ruling will lead shareholders to hold mutual funds to account. Don’t tell us how much you care about addressing climate change and then vote our shares against proposals filed to address the issue. More than twenty years ago I wrote about Fiduciary Responsibilities for Proxy Voting and my attempts to get government agencies to ensure proxies were voted properly. Once again, government has failed us and we must take up the cause through private ordering. I plan to join in this creative effort with my own proposal(s). Consider joining us.

A new ruling by the Securities and Exchange Commission (SEC) holds far-reaching implications for investor efforts to promote proactive corporate responses to climate change.  Every spring in annual meetings, shareholders vote on hundreds of proposals asking  corporations to take more proactive action to consider and reduce  impacts on climate change –  to shift toward renewable energy sources, to reduce greenhouse gas emissions, and to consider risks to their financial future associated with an overemphasis on fossil fuels.

The proposals are filed by public pension funds, religious institutions and socially responsible investors holding stock in the companies. However,  a massive portion of the vote for or against the proposals is controlled by large mutual funds which  often vote reflexively against shareholder proposals, with  limited accountability to explain their rationale.

In a letter issued November 24, 2015, SEC Staff held that a proposal seeking to hold a mutual fund accountable for its poor voting record on climate proposals is not excludable from the proxy statement. The proposal at Franklin Resources Inc.( doing business as Franklin Templeton Investments) was submitted by Zevin Asset Management LLC on behalf of its clients.[1] In the proposal which will now appear on the proxy in the spring: 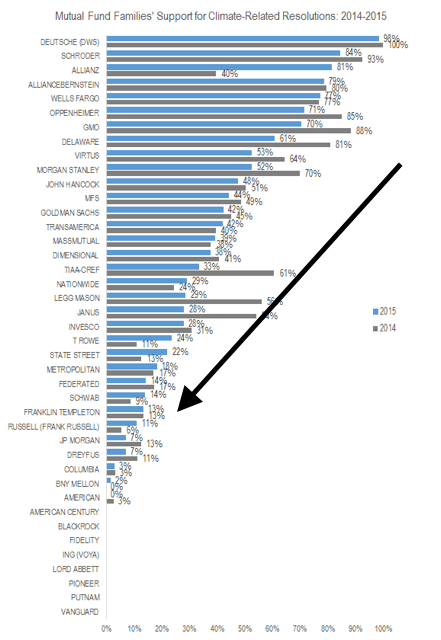 Shareowners request that the Board of Directors issue a climate change report to shareholders by September 2016, …[to] assess any incongruities between the proxy voting practices of the company and its subsidiaries within the last year, and any of the company’s policy positions regarding climate change.

This assessment should list all instances of votes cast that appeared to be inconsistent with the company’s climate change positions, and explanations of the incongruency. The report should also discuss policy measures that the company can adopt to help enhance congruency between its climate policies and proxy voting.

Perhaps most notably, the Company argued to the SEC in a request for a no action letter (that would allow the company to exclude the proposal) that its existing legally required [2] disclosures of  its proxy voting records and guidelines  “substantially implement”  the request of the proposal. Those disclosures reveal that the company’s voting record on climate change is near the bottom of the pack among mutual funds (See chart, courtesy of CERES). The guidelines show that its subsidiaries have a great deal of flexibility  to decide whether to vote for or against climate proposals.

The proponent argued that since the company says it takes a “long-term” view of investments and  has endorsed the UN Principles for Responsible Investment, this posture of environmental leadership seemed inconsistent with its climate voting record.  Shareholders are entitled to ask  the company for  a better explanation of this seeming inconsistency, and also to encourage the company to do better.

The Company argued that the subject matter of the proposal was proxy voting (excludable based on prior decisions as relating to ordinary business), while the proponents successfully asserted that the proposal focused on  a transcendent policy issue of climate change, which is not excludable. The decision was a first  opportunity for the SEC to apply its newly minted Staff Legal Bulletin 14H (CH) which held that if the focus is a significant policy issue, it’s not excludable even  if the proposal touches on “nitty gritty” business practices.[3]

The Company also argued that as a parent company, Franklin Resources Inc., lacked the power to evaluate or influence proxy voting of its subsidiaries. Subsidiaries have a fiduciary duty to evaluate proxy proposals on behalf of their clients without “undue influence” by a parent company. However, proponents asserted that the proposal left leeway for the parent company to provide legitimate assistance to the subsidiaries, for instance risk assessment resources,  without crossing a line into improper influence.

Download the full text of the SEC decision and correspondence from the company and the proponent.

*Disclosure: The author represented the proponents in defending the proposal before the SEC.