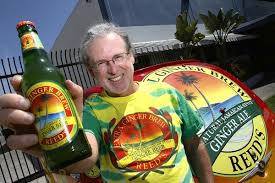 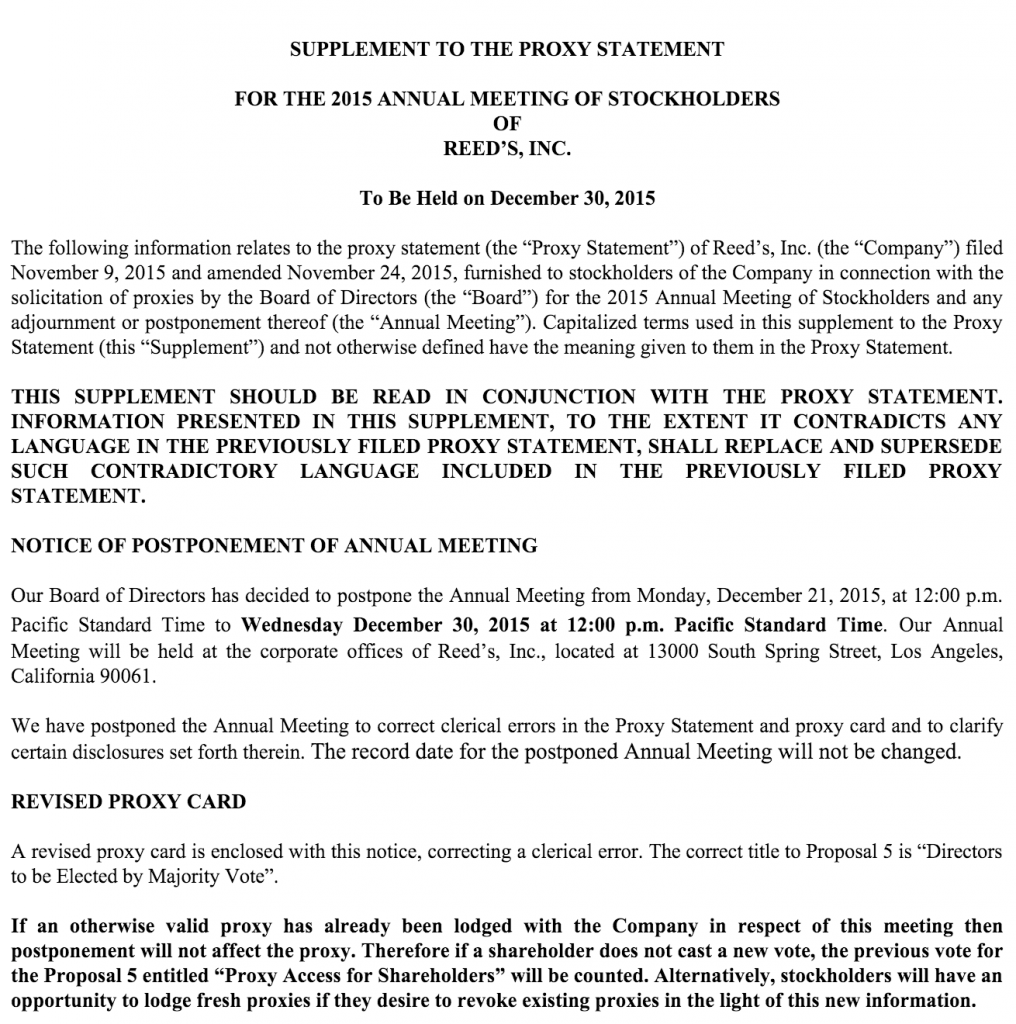 2nd update, 12/20/2015: Unpack your bags, cancel your flight and hotel. Reeds Inc. (REED) has postponed tomorrow’s annual meeting to 12/30/2015. Although the move may be costly to shareowners and our company, it may pay dividends in the long-run if REED finally starts paying more attention to shareowners, corporate governance and their legal obligations. REED made a material error in their proxy materials and ballot. Although they filed a revised proxy, they didn’t pay to send a new ballot or link to shareowners. The supplement they issued on Friday includes a new ballot but so far that has not gone out to most shareowners.  I am hoping they will do so this week through Broadridge’s proxyvote.com platform.

Of course, their opposition to my proposal to require a majority vote to elect directors is still baffling and contradictory. Essentially, they say they already require a majority vote. Yet, when the majority of shares were voted against Daniel S.J, Muffoetto last year, their Form 8-K filing said “the Company’s shareholders elected the existing board of directors for a one year term.” (my emphasis) Vote in favor of my majority vote proposal and our Board will get the message… votes should have consequences. No more zombie directors who don’t even hold stock in REED. Let’s get a board that really has the incentive to get involved, taking REED to greatness.

Update: CalPERS updated their vote on 12/18/2015, now withholding from director nominees Mark Harris, Daniel S.J. Muffoletto, and Michael Fischman. I removed the original post and uploaded this one to reflect those votes.

Reeds, Inc. (REED), together with its subsidiaries, develops, manufactures, markets, and sells natural non-alcoholic carbonated soft drinks, Kombucha, candies, and ice creams in the United States, Canada, Europe, and Asia. Reeds is one of the stocks in my portfolio. Their annual meeting is on December 21, 2015.

Unfortunately, ProxyDemocracy.org doesn’t appear to cover REED. However, I was able to find the votes of CalSTRS and CalPERS. I voted with the Board’s recommendations 22% of the time. View the original Proxy Statement and their revised Proxy Statement.

From Yahoo! Finance: No report from ISS of a Governance QuickScore for REED.

The REED Summary Compensation Table (p. 20) shows the highest paid named executive officer (NEO) was Christopher J. Reed at $230.6K. I’m using Yahoo! Finance to determine market cap ($77.6M) and Wikipedia’s rule of thumb regarding classification. REED is a small-cap company. According to Equilar (page 6), the median CEO compensation at small-cap corporations was $2.7 million in 2013. Reeds shares outperformed the S & P 500 during the most recent five year time period, but underperformed over the latest one, two, and ten year time periods.

The MSCI GMIAnalyst report I reviewed doesn’t give REED an overall grade but does give it a distress rating of average. The actual pay package is fine but the stock option plan we are asked to vote for is too open ended and large. I voted with CalPERS and CalSTRS against it.

As stated above, I voted against the stock option plan. As indicated in my very long post on the 15th, Reeds Renominates Zombie Director Muffoletto, I voted against Dr. Muffoletto, Mr. Harris and Mr. Fischman. Neither Muffoletto nor Fishman own any stock in our company. None have a real financial incentive to monitor management. All served on the nomination committee, renominating director Muffoletto, who shareholders rejected last year. I also voted against Judy Reed because she is the corporate secretary. I don’t understand how she could have approved a proxy with the wrong heading for one of the items. Although REED revised their proxy, after I brought their ‘mistake’ to the attention of the SEC, they didn’t revise the ballot that went out to most voters. Why? Here’s the answer I got from Broadridge, the company that sends out the proxy materials:

When companies revise their proxies, we follow the instructions they give us.  When there are material changes, we’ve been asked to do additional mailings – and, yes, that entails costs and fees.   We’ve also been asked to update links to the materials on proxyvote.com.

Since it would cost money to do an additional mailing and to update links on proxyvote.com to the revised proxy statement, I am assuming Ms. Reed judged the title of the item to be voted ‘immaterial,’ and therefore decided not to pay the additional costs. Since many, if not most, shareholders simply read the ballot, they won’t even see the real subject matter of the proposal. Even if they do click to read the proxy, ProxyVote.com connects them to the original proxy, not the corrected one, so the shareholder proposal is titled “Proxy Access for Shareholders” not “DIRECTORS TO BE ELECTED BY MAJORITY VOTE.”

Of course, I voted in favor of my own proposal to require majority voting to elect directors, which appears on the ballot and in the proxy materials sent to shareholders as a proposal entitle “proxy access for shareholders.”

As I indicated in yesterday’s post, Reeds Renominates Zombie Director Muffoletto, it appears Mr. Fischman gets paid about $3.62/hour for his board work. Would that motivate you? While zombie director Mr. Muffoletto’s estimate pay of  $44.78/hour works out to well above minimum wage, it is still very low for executive pay. As I explained yesterday about the REED board, “the only explanation I can come up with for investing no money and getting paid nearly nothing is that they are doing the founder a favor.” We should be able to vote directors out of office but can’t do so if our votes don’t mean anything. We voted against Muffoletto last year. Let’s vote to require majority voting to elect directors. Let’s vote to make our votes count.

REED: CorpGov Recommendations Below – Votes Against Board Position in Bold

Unfortunately, SharkRepellent.net doesn’t cover REED and I didn’t have time to research provisions unfriendly to shareowners.

If a stockholder wishes to present a proposal to be included in our proxy statement and form of proxy for the 2016 Annual Meeting of Stockholders, the proponent and the proposal must comply with the proxy proposal submission rules of the SEC and namely, Securities Exchange Act Rule 14a-8. One of the requirements is that the proposal be received by our Secretary by no later than 120 calendar days before November 23, 2016 – the anniversary date of this Proxy Statement was released to stockholders in connection with the 2015 Annual Meeting. If the date of next year’s annual meeting is changed by more than 30 days from the anniversary date of this year’s Annual Meeting on December 21, 2016, then the deadline is a reasonable time before we begin to print and mail proxy materials. Proposals we receive after that date will not be included in the proxy statement for the 2016 Annual Meeting of Stockholders.