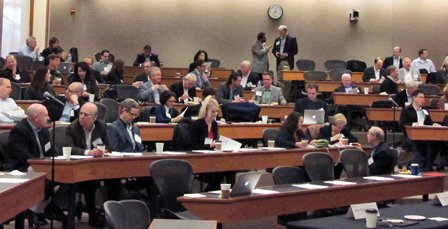 Directors Prepare for Shareholder Activism Before the Panel

How should directors prepare for shareholder activism? That was the underlying question addressed by last week’s SVDX / Rock Center for Corporate Governance joint event – Shareholder Activism: The Good, the Bad or Just Ugly.  Shareholder activism is in the news almost every day. How does it play out in Silicon Valley? Is activism beneficial to (some) shareholders in the short-term but harmful to the company (especially Silicon Valley companies) in the long-term?

Jesse Cohn manages the US equity activist efforts and technology portfolio for Elliott Management Corporation, a $27 billion hedge fund based in New York.

Jesse has pursued investments in a number of companies for Elliott Management, including Informatica Corp, Riverbed Technology, EMC Corp, Juniper Networks, BMC Software and Brocade Systems. On behalf of Elliott, he sits on the boards of Citrix Systems, MSC Software, BMC Software (observer), E2Open, Mitchell International (observer) and Ark Continuity. Jesse is also a frequent speaker on activism and governance-related topics and has spoken at the Stanford Directors College, among others.

With 20 years experience as a high tech CEO, Penny’s strengths are building advanced technology products and teams, growing revenue and developing world-class global customers, as well as coaching CEOs, executives and entrepreneurs to help them achieve business and career growth. She took her first company, Simplex, public and then sold it to Cadence Design Systems. She serves on the board and chairs the compensation committees at Rambus and Lumentum, and is still involved as chair of her last company, FirstRain.

Steven Davidoff Solomon is professor of law at UC Berkeley and co-director of the Berkeley Center for Law, Business and the Economy.

Steven’s research focuses on financial regulation, hedge funds and private equity, mergers and acquisitions, deals and deal theory and jurisdictional competition. He has a particular interest in international issues and interdisciplinary research in law and finance. Steven writes a weekly column for The New York Times as  The Deal Professor, which primarily focuses on corporate issues. He also writes regularly for The New York Times DealBook and in trade journals, lectures and has testified before the U.S. Senate. Personally, I loved his article Grappling With the Cost of Corporate Gadflies, which I responded to with Deal Professor Equates Filing Proxy Proposals with Terrorism. 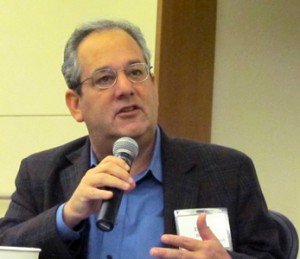 David Berger is partner at Wilson Sonsini Goodrich & Rosati and specializes in representing companies and directors in litigation involving mergers and acquisitions, fiduciary duties, activism and corporate governance. He also writes and speaks extensively on these issues and has taught classes on corporate governance and shareholder litigation at law schools across the country, including Harvard Law School, Stanford Law School and Duke University School of Law. David is a recognized authority on fiduciary duty litigation and has litigated numerous corporate control transactions and securities litigations in state and federal courts in Delaware, California, New York and elsewhere.

This program, like all SVDX programs, is subject to the Chatham House Rule, so I’m providing no direct quotes below… just a sense of what the discussion was like.

Real campaigns take many years. You have to look at the activists objective. The day the activist shows up, you’ve lost because everyone else has been here before many times but it might be only the first or second time for you.

Boards may try to block an activist but in most cases they can’t. In many cases, activists have built their case upfront. Media and markets weigh in before the company formulates a response. If everyone is doing their job, it leads to a discussion, with the truth tending to find its way out.

Don’t long-term company plans go out the window? A lot of what’s recommended by activists has to do with that long-term plan and other projections that go out for years. Many activists are not focused on the short-term because decisions are made or changed now for what will happen in the future. The activist is an accelerant, especially on issues like replacing the CEO. Directors prepare for shareholder activism by thinking more like activists themselves.

Does the activist push companies to distribute capital in a harmful way? R&D and other expenditures are examined on a case-by-case basis. Activists want to make sure they are likely to pay off. Buybacks movement seems overdone. Companies may not have enough cash with all the buybacks. It is argued that companies are frequently spending money on distractions, while core functions and operations suffer. Activists talk to former employees, customers, competitors. Directors prepare for shareholder activism by doing much the same.

Maybe taking CEO out is culturally destructive? The CEO and board must have the ability to communicate their future direction and its validity. Rise of CamberView, discussions with Chris Cernich of ISS, The Deal Professor, etc. Activists get to know these people and many more. They do their homework. Media is inclined to seize on conflict. The activist industry is experienced in stirring that pot but has matured. Now, everyone can see their track record. Most activists will use the minimum amount of tools needed to get the job done. They won’t make it a media show unless they need to.

When directors prepare for shareholder activism, proposals shouldn’t be a surprise. Most activists will contact companies before filing their 13D. Most try to start out constructively and collaboratively. They calibrate their approach based on the circumstances. Many of the more constructive activists have an average holding period of over 2.5 years, whereas the average mutual fund holds for about 270 days and ETF have even shorter average periods of ownership. Institutional shareholders may be more focused on the short-term than activists.

Activists begin by asking if a firm has value beyond market price and can they generate positive change? Dual class stock trend was touched on.  14% of IPOs last year. Not just tech companies but tool du jour in Silicon Valley. Dual class can focus companies on the long-term and help them preserve mission. A statement that studies show them to be mostly harmful, didn’t get a response. I’d say the evidence is mixed. Activists have taken on dual-class stock companies but they do so with an important tool removed from toolkit.

Core holdings? Many mutual funds don’t really have. Index funds are difficult to communicate with… did I hear that right? Activist campaigns get a lot more attention by institutional shareholders than typical proxy votes on splitting chair, proxy access, etc.

Typically, activists only get access to management. How do directors prepare for shareholder activism? If directors can’t describe their company’s strategies to each other, they certainly won’t be able explain them to shareholders. Are you finding these struggles before activist comes along? Yes, activists are often hearing about the struggles of corporations years in advance of scoping them out. Directors have to do you duty, keep raising the issues… or step off the board. Clubby mentality in tech can be problematic; worship at the alter of growth… so too frequently such firms take unnecessary risks on silly M&A projects.

What is the expected lockup period and doesn’t correlate with an activists investment horizon? For many, it is investment dependent. Everyone is different. 1-3 years? Know the activist fund. Look at previous campaigns – their track record. Do your due diligence as a director. Your response should depend on the merits of what’s been said. Investment bankers and law firms will be more than willing to brief you.

Prediction: Universal proxy card isn’t going to happen because Broadridge is incapable of handling the proxy plumbing. They have it in Canada. Some discussion around HSR filing, which were just raised, with regard to thresholds. Buy swaps and you can avoid HSR filing? More funds but lowered the bar for what needs activism. Attention has increased the size of pool. Alpha decrease?  Activists continue to find plenty to do.

As I was typing up this blog post, I got a note frown the PwC Center for Board Governance and their January Governance Insights, which referenced back to PwC’s Strategy+Business article, Be Your Own Activist Investor. It is well worth reading in full but here is a cut and paste of the 10 principles it discusses in much greater detail with a host of interesting examples:

1. Go big and go fast. Reducing costs by 10 percent, net of investments, over three years used to be a stretch target for many companies. No more. Don’t overplan and wait for every process to be perfect; act quickly and assuredly.

2. Start with head count. The old-school style of cost transformation was sequential: Take the work out first, then the people. Lowering head count first creates a vacuum… remaining workers must fill that vacuum, rising to the occasion to keep their part of the business running.

3. Justify what to keep, not what to kill. All spending is investment. Every cost is a choice. The secret to unlocking growth through cost reduction is to make deliberate choices: not about what to cut from your budget, but about where to invest.

4. Appeal to hope, not fear. Any major change initiative has winners and losers. Avoid putting people on the defensive.

5. Shake up the executive ranks decisively. Ensure you have the right executive team for the future.

6. Reconsider everything, even your sacred cows. Don’t be afraid to put everything out into the parking lot for evaluation. If the CEO’s favored organization or pet project is on the chopping block, it sends a powerful signal to the organization that “we’re all in this together.”

7. Set up a parallel organization to change the business. Cost transformation is not business as usual. It’s like changing the tires on a bus while it is traveling at 55 miles per hour.

8. Challenge the way you do things. Given the nature and magnitude of the change you are seeking, you must go beyond simply addressing unjustifiable costs. You also need to consider the factors underlying them.

9. Look horizontally, across the organization. Resist the temptation to impose percentage cuts on each department or function. Instead, look for expenses hidden in the seams and buried in cross-functional processes.

10. Showcase quick wins. Early “trophies” communicate that the company is serious about tackling nonessential, nonstrategic costs to throw off funds for more productive and far-reaching initiatives.

Shareholder activism continued to grow worldwide in 2015, with the number of companies subjected to public demands reaching 551, up 16 percent from 2014, according to The Activist Investing Annual Review 2016, published by Activist Insight, in association with Schulte Roth & Zabel (“SRZ”).

Additional highlights from the review: