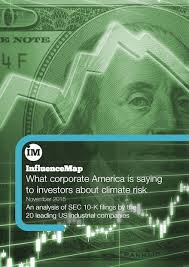 Encouraged by the forward‐looking actions addressing climate change at the Paris Climate Conference (COP21) in December, investors have filed shareholder resolutions at 11 oil and gas companies asking them to disclose climate lobbying activities. The resolutions urge the companies to fully disclose their lobbying activities and expenses (direct and indirect through trade associations) and to review their public policy advocacy on energy policy and climate change. Let’s get oil and gas companies to disclose climate lobbying! I sincerely hope readers of Corporate Governance (CorpGov.net) will vote in favor of these resolutions as they appear on corporate proxies. Monitor how others are voting at Proxy Democracy. If you own stock in other oil and gas companies, consider filing similar resolutions. Don’t know how? Check out our Shareowner Action Handbook. Take Action!

Oil and gas companies have faced widespread public scrutiny of lobbying, both directly and behind the scenes, to influence legislation and regulation related to climate change. For example, most major oil companies are Chamber members. The U.S. Chamber of Commerce sued the EPA to block the Clean Power Plan, a core component of the U.S. Administration’s plan to reduce greenhouse gas emissions.

Moreover, some companies that publicly state their deep concern about addressing climate change have Government Affairs staff and lobbyists that fight regulations promoting climate solutions at the federal or state level. Investors call on these companies to disclose climate lobbying by ensuring that their lobbying is consistent with their stated positions as well as proactive solutions to climate change.

Global investors’ concern about climate lobbying is reflected in a public statement by members of the Principles of Responsible Investment (PRI) entitled “Investor Expectations on Corporate Climate Lobbying.” Over 60 investors with assets under management of more than $4 trillion signed the statement. In addition to the moral imperative to address climate change, investors recognize that climate change poses risks to the global economy and to their investment portfolios. Filing these resolutions is one of many steps investors are taking to mitigate these risks.

Two different shareholder resolutions were filed at oil and gas companies to disclose climate lobbying (see Table 1). One requested disclosure of direct or indirect lobbying, including payments to trade associations that use dues and special payments for lobbying. A second resolution focused on company support for trade association lobbying or public policy advocacy by groups such as the American Legislative Exchange Council (ALEC), which challenges state regulations on renewables as well as the EPA Clean Power Plan, and the Western States Petroleum Association, which lobbied against California’s climate legislation.

Timothy Smith of Walden Asset Management, one of the coordinators of this initiative to disclose climate lobbying, stated,

This is a critical moment for investors to press oil and gas companies to be transparent about their lobbying expenditures and assess whether their lobbying dollars are spent to maintain the status quo on climate change policy.

A company whose lobbyists or trade associations actively impede the Clean Power Plan or fight renewable energy at the state level is standing on the wrong side of this urgent global effort to address climate change. Investors are calling on the oil and gas industry to pause and assess the climate impact of their lobbying and stop or alter lobbying that does not advance effective climate policy.

Not all of the resolutions to disclose climate lobbying filed are expected to appear on company proxies for a vote. Some will be withdrawn on the basis of agreements with investors and others may be successfully challenged by companies at the SEC.

The debate to disclose climate lobbying by oil and gas companies has been stimulated by:

In contrast, hundreds of companies attended or spoke out during COP21, supporting leadership by governments and companies to find climate solutions. Companies from numerous industries (e.g. food, mining, banks, and utilities) issued statements highlighting the threat of climate change and the urgency of addressing it to keep global temperature rise below the 2 degree Centigrade goal.

Companies also joined coalitions coordinated by NGOs, businesses, or the White House (e.g. We Mean Business, The American Business Act on Climate Pledge). Some companies committed to procure 100 percent of their electricity from renewable sources of energy. In addition, 10 European oil companies issued a public declaration and Exxon‐Mobil released a company statement that reissued its call for a revenue neutral carbon tax.

Finally, investors were also strong supporters of the COP21 process. For example, over 400 global investors representing more than $24 trillion in assets have participated in a joint statement that was launched in September 2014, encouraging governments worldwide “to develop an ambitious agreement on climate change…” Efforts to disclose climate lobbying can help meet that goal.

There is mounting evidence of the significant long‐term impacts of climate change on our energy infrastructure and, ultimately, the ability of energy companies to deliver their products and sustain a profitable business model. This has not gone unnoticed by the energy sector, given the active lobbying on climate change policy and regulations. Shareholders have every right to know how company resources are being expended to lobby around these issues, as well as the measures taken by company management to protect the company’s financial health and shareholder value. That is why Connecticut has joined in filing shareholder resolutions with Conoco Phillips, Devon Energy, Chesapeake Energy and Occidental Petroleum, challenging each to fully embrace transparency and accountability by disclosing the substance and extent of their lobbying efforts.

Let’s get oil and gas companies to disclose climate lobbying! I sincerely hope readers of Corporate Governance (CorpGov.net) will vote in favor of these resolutions as they appear on corporate proxies. Monitor how others are voting at Proxy Democracy. If you own stock in other oil and gas companies, consider filing similar resolutions. Don’t know how? Check out our Shareowner Action Handbook. 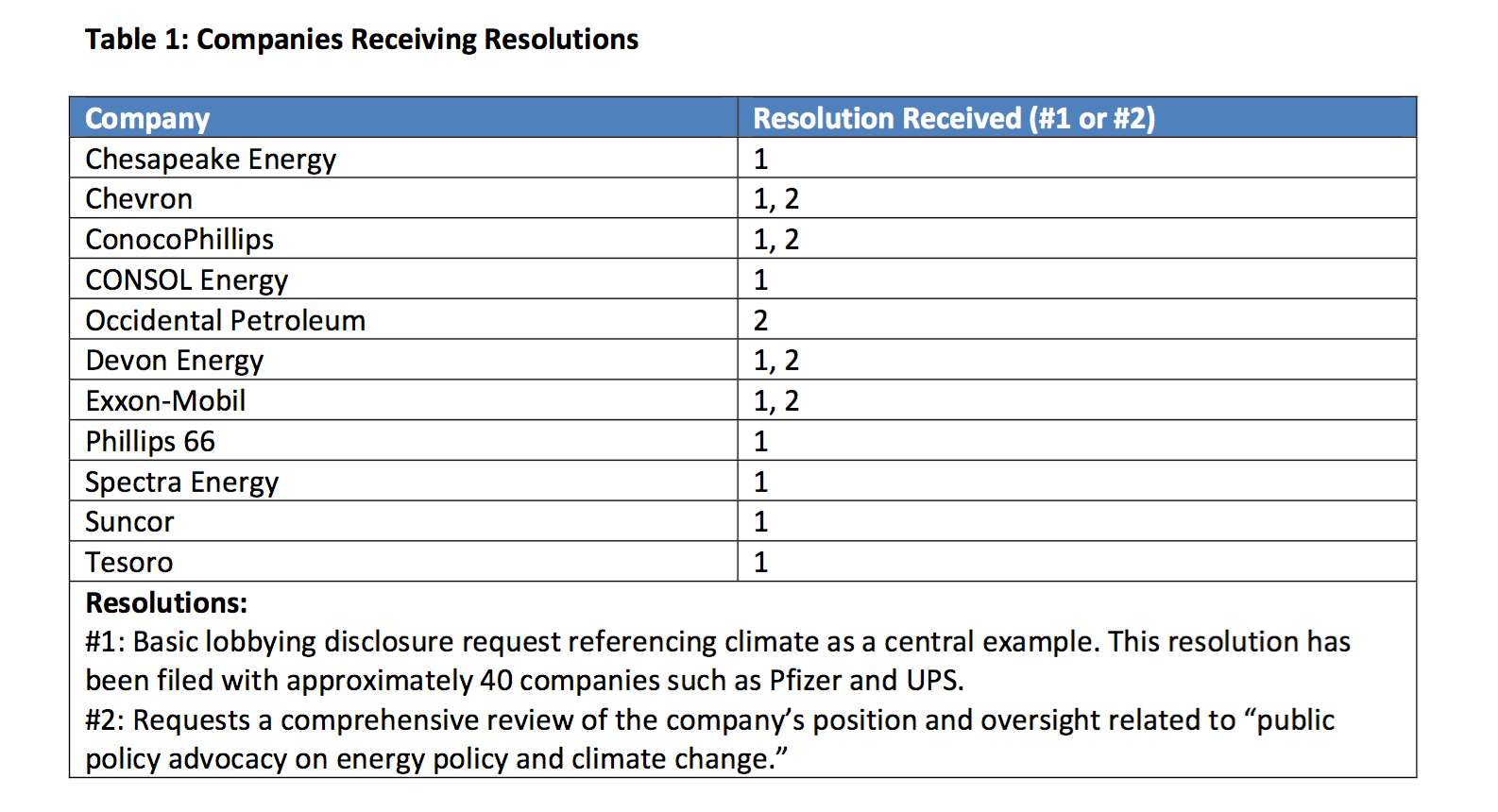 Whereas, we believe in full disclosure of our company’s direct and indirect lobbying activities and expenditures to assess whether our company’s lobbying is consistent with Chevron’s expressed goals and in the best interests of shareholders.

Resolved, the stockholders of Chevron Corp. (“Chevron”) request the preparation of a report, updated annually, disclosing:

The report shall be presented to the Audit Committee or other relevant oversight committees and posted on Chevron’s website.

As stockholders, we encourage transparency and accountability in Chevron’s use of corporate funds to influence legislation and regulation. Chevron spent $18.81 million in 2013 and 2014 on federal lobbying (opensecrets.org). These figures do not include lobbying expenditures to influence legislation in states, where Chevron also lobbies but disclosure is uneven or absent. For example, Chevron spent over $4.3 million lobbying in California for 2014 (http://cal‐access.ss.ca.gov/). Chevron’s lobbying against EPA greenhouse gas regulations has attracted media attention (“Half a Billion Dollars Gets You a Gentler Climate Plan,” Bloomberg, Aug. 5, 2015), as has its lobbying on California’s greenhouse gas reduction bill (“Lobbyists Pile on Greenhouse‐gas Reduction Bill,” Sacramento Bee, Aug. 28, 2015).

In 2014, Chevron made a $1,000,000 political contribution to the Chamber of Commerce, which has spent more than $1 billion on lobbying since 1998. Chevron is also listed as a member of the American Petroleum Institute, Business Roundtable and Western States Petroleum Association. Chevron does not disclose its memberships in, or payments to, trade associations, or the portions of such amounts used for lobbying.

And Chevron does not disclose membership in or contributions to tax‐exempt organizations that write and endorse model legislation, such as being a member of the American Legislative Exchange Council (ALEC). Chevron’s ALEC membership has drawn press scrutiny (“Fossil Fuel Firms Are Still Bankrolling Climate Denial Lobby Groups,” The Guardian, Mar. 25, 2015). More than 100 companies have publicly left ALEC, including peers BP, ConocoPhillips, Occidental Petroleum and Shell.

(A similar resolution was filed at Chevron, Devon Energy, Exxon‐Mobil, and Occidental Petroleum.)

Whereas: The Intergovernmental Panel on Climate Change (IPCC), the world’s leading scientific authority on climate change, confirmed in 2013 that warming of the climate is unequivocal and human influence is the dominant cause. Extreme weather events have caused significant loss of life and billions of dollars of damage. Many investors are deeply concerned about existing and future effects of climate change on society, business and our economy.

The IPCC estimates that a 50% reduction in greenhouse gas emissions globally is needed by 2050 (from 1990 levels) to stabilize global temperatures, requiring a U.S. target reduction of 80%.

Urgent action is needed to achieve the required emissions reductions. We believe the U.S. Congress, Administration, States and cities, must enact and enforce strong legislation and regulations to mitigate and adapt to climate change, reduce our use of fossil fuels and move to a renewable energy future.

Accordingly, we urge companies in the energy sector to review and update their public policy positions on climate.

Investor concern about climate lobbying is growing. The Principles for Responsible Investment (PRI) published a set of Investor Expectations on climate lobbying endorsed by investors with $4 Trillion in AUM calling on companies to ensure their public policy advocacy supported efforts to mitigate and adapt to climate change.

The public perception is that oil and gas companies often oppose laws and regulations addressing climate change or renewable energy.

Consequently, company political spending and lobbying on climate or energy policy, including through third parties, are increasingly scrutinized. For example, investors question companies’ public policy advocacy through the U.S. Chamber of Commerce, which often obstructs progress on climate‐related legislation and in October sued the EPA challenging its climate change initiative, the Clean Power Plan. ConocoPhillips is an active member of the Chamber.

In contrast, in October 2015 ten of the world’s oil companies, including BP and Shell, called for strong global climate goals and supported reducing their Greenhouse Gas emissions.

Resolved: Shareholders request that the Board commission a comprehensive review of ConocoPhillips’s positions, oversight and processes related to public policy advocacy on energy policy and climate change. This would include an analysis of political advocacy and lobbying activities, including indirect support through trade associations, think tanks and other nonprofit organizations. Shareholders also request that ConocoPhillips prepare (at reasonable cost and omitting confidential information) a report describing the completed review made available by September 2016.

Supporting Statement:
We recommend that this review include: