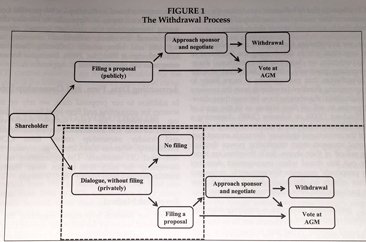 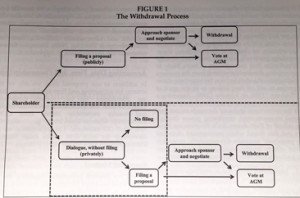 Who Withdraws Shareholder Proposals and Does It Matter? An Analysis of Sponsor Identity and Pay Practices is the title of an import study in the November 2015 issue of Corporate Governance: An International Review. Examination of this topic is long overdue. Companies constantly take full credit for corporate governance reforms, such as the addition of proxy access bylaws, when they are doing so only to avoid a vote on a more robust shareholder proposal.

Who Withdraws Shareholder Proposals: What Was Examined?

The authors studied more than 12,000 shareholder proposals that were filed to S&P1500 companies from 1997 to 2009, and investigate the determinants of proposal withdrawal by the sponsoring shareholder.  Their purpose is to study the effectiveness of withdrawn proposals as a corporate governance device.

Proposals filed by influential investors are more likely to be withdrawn than proposals filed by private investors. Institutional ownership (in particular by long-term, passively investing institutions) is positively related to the likelihood of a proposal’s withdrawal if the sponsoring shareholder is an institutional investor. Of course, companies are more likely to want to negotiate with institutional investors. The authors find a negative relation between CEO ownership and the likelihood of withdrawal and this negative correlation is most pronounced for corporate governance proposals. I see the issue is power. CEOs with high ownership stakes are frequently founders looking to maintain control. The authors also show that withdrawn proposals on executive compensation are likely to change subsequent corporate pay practices.

The authors find that withdrawn proposals are a strong and important category of proposals because managers proactively prevent them from being put to a vote. Results imply that researchers should take into account withdrawn shareholder proposals when making inferences about the effectiveness of proxy proposals.

Withdrawn shareholder proposals appear to be an effective governance mechanism. Managers try to protect their own power and reputation by preventing filed shareholder proposals from being put to a vote during the annual general meeting by entering into private negotiations with the sponsors of the proposals to accomplish a withdrawal. Withdrawn or ‘unsuccessful’ proposals often result in negotiated compromises.

Who Withdraws Shareholder Proposals: My Critique

As a frequent filer of shareholder proposals, I am curious as to how the authors know what proposals have been withdrawn. It appears the information was obtained from ISS but ISS would’t know unless the information appeared in the press, withdrawal was the result of a no-action letter being filed or one of the parties told ISS.
For example, during the past year I reached agreements with several companies to withdraw proxy access proposals, based on agreements reached with companies. In most cases, few would ever know because the companies usually put out a press release announcing their recently adopted bylaws and credit is never given to a shareholder proposal for prompting such action. I queried the authors about other sources available to them but they did not respond.
Second, the authors don’t seem to mention company filed no-action requests with the SEC as a prominent reason for withdrawing proposals.  These take substantial work by both parties. To avoid the time and cost of such efforts, both sides may be more willing to negotiate, especially if the outcome of the request to the SEC is in question. If this issue was raised, I missed it.

Who Withdraws Shareholder Proposals: My Experience

I am an individual retail investor who frequently works with institutional investors. Most of the largest private institutional investors never, or very rarely, file proxy proposals. Those who do file are usually SRI type mutual, union or public pension funds. The first two file most of the proposals on social or environmental issues. Public pensions and, even more so, retail investors are usually more focused on corporate governance issues.

While social and environmental issues can frequently be negotiated in stages, many corporate governance measures are binary. For example, it is easier to negotiate a partial gain in sustainability reporting than it is to find a compromise on splitting board chair and CEO positions, especially since most proposals requesting a split begin by asking that it be undertaken with the next CEO.

Who Withdraws Shareholder Proposals: The Future

Looking to the future, some differences may reduce. For example, the most frequent individual filers are John Chevedden, Kenneth and William Steiner, James McRitchie (me) and my wife, Myra Young. (Small Group Behind Most Shareholder Proposals) In 2016 we are filing a lot of proxy access proposals. These are not binary and are therefore subject to negotiated agreement and withdrawal.

Who withdraws shareholder proposals is subject to many factors, including insider ownership, subject matter, perceived influence of the filer, etc. However, the main ‘finding’ of the authors is beyond doubt. Don’t dismiss the influence of proposals that may never appear on the proxy.