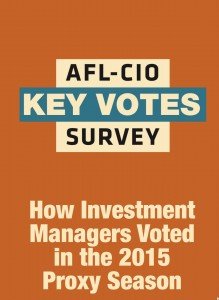 The AFL-CIO Key Votes Survey is designed to help pension fund trustees fulfill their fiduciary duty to monitor the proxy voting performance of investment managers. Good corporate governance matters to shareholders and proxy voting is the most direct means for shareholders to exercise oversight in relation to the corporations they own. (Read the full report.)

Proxy Votes Must be Cast in Your Interest

In 1988, the U.S. Department of Labor advised pension fund trustees that under the Employee Retirement Income Security Act (“ERISA”), the voting rights attached to company stock are “plan assets” that must be managed according to ERISA fiduciary standards. The Department of Labor requires investment managers to “maintain accurate records as to proxy voting” and permit trustees to “review the actions taken in individual proxy voting situations.”

Pension funds and deferred compensation programs generally delegate the authority to vote their shares to investment managers, mutual funds, or a specialized proxy voting consultant. Because proxies are a plan asset, ensuring that they are voted in the interests of beneficiaries is part of a trustee’s fiduciary duty. The Key Votes Survey is intended to help trustees fulfill this duty by reviewing the voting records of these investment managers, mutual funds, and proxy voting consultants.

See my post, Fiduciary Responsibilities for Proxy Voting, from October 1995. Although proxy votes ‘must’ be voted in the interest of beneficiaries, they typically aren’t and neither the Department of Labor nor anyone else has ever successfully enforced this provision of law. (If I’m wrong, please let me know of any specific case.)

The proposals included in the Key Votes Survey are submitted by Taft-Hartley, union, and public employee pension funds as well as employee shareholders and other investors. They are consistent with the AFL-CIO Proxy Voting Guidelines. These proposals represent a worker-owner view of value that emphasizes management accountability and good corporate governance. A score representing the percentage of support and corresponding tier group categorization are assigned to each firm to assist trustees in evaluating the relative proxy voting performance of competing investment managers.

Proposal topics represented a wide range of worker interests from proposals asking the board of directors to limit accelerated vesting of equity awards to senior executives upon termination or a change of control to proxy access. I support the vast majority of the proposals.

Only 18 funds placed in the top tier, always voting with AFL-CIO Proxy Voting Guidelines. They included some familiar names to readers of corpgov.net such as Amalgamated Bank, Bridgeway Funds and Green Century. All are relatively small funds. The middle tier included a much larger group of mostly middle-size funds, with a lot of familiar SRI names like Walden, Calvert, Pax World, etc. but also a few surprises for me like Wells Fargo. At the bottom were the usual suspects, huge funds like American Century, BlackRock, Fidelity, Fidelity, Franklin Templeton, INVESTCO, JP Morgan, Northern Funds, State Street Global Advisors, T. Rowe Price, and the Vanguard Group.

While these large funds battle with each other for investors, those which are not private (like Fidelity) increasingly own a significant stake in each other’s business as well as in America’s largest companies of all varieties. The Japanese name for this horizontal web of joint partnerships is keiretsu. While many American funds have sought to dismantle the keiretsu system in Japan, in order to enter that potentially lucrative market, they have helped to create a virtual democracy-free zone in corporate America by adopting proxy voting policies that result in voting with management and against shareholder initiatives on almost every issue. 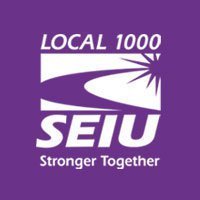 I hope the AFL-CIO’s Key Votes Survey will not only be read by labor trustees, who continue to vote to place retirement funds with the American keiretsu, but by all concerned with where there money is invested and how it is voted.

For example, I have written several posts on California’s deferred compensation plan for state employees, which invests billions. In researching the post, Savings Plus: Transparent Proxy Voting Needed, I found the Northern Stock Index Fund (which took the lion’s share of investments) voted against just about everything state employees work for during their day jobs. Northern voted against political and supply-chain transparency, pay for performance standards for executives, equity retention, board diversity, etc. Yet, as far as I know, there hasn’t been a peep of objection from large unions representing state employees, such as SEIU Local 1000. Maybe their Capital Stewardship Program needs more resources?

Workers throughout our  country can end public corporations as democracy-free zones by demanding their retirement and deferred compensation plans offer investments in funds that vote in favor of worker and environmental interests. Workers should be demanding to have the funds they invest in clearly display their proxy votes just as we can easily find those announced in advance of corporate annual meetings at ProxyDemocracy, CalSTRS, CalPERS, Australia’s Local Government Super and OTPP. If Americans could see in real-time, through AP and Reuters news feeds, how the funds they invest in are voting, they would demand that voting change or they would move to funds that vote in their interests. Because of the interlocking nature of these huge funds, it won’t be easy to change their voting practices. However, if we can succeed in changing one or two, the rest may fall like a house of cards.

Key Votes Survey Should Take the Struggle Inside the American Keiretsu

The AFL-CIO would do well to double down on their survey. Don’t just measure how these funds vote at US companies, measure how they vote proposals filed by shareholders at the funds themselves.

For example, we need far more proposals like that introduced by Zevin Asset Management at Franklin Resources, which manages the Franklin Templeton family of mutual funds. Their proposal, to be voted on this year, highlights the contradiction between Franklin’s voting practices and its policy positions regarding climate change. Unions should be filing similar resolutions with all publicly traded funds comprising the American Keiretsu.

Votes are precious assets. Don’t let our investments vote against us. Working together, we can ensure they are used in our interests, not to fight against everything we work for each day. Wall Street does not have to be a democracy-free zone. Occupy your pension and your deferred compensation plan.