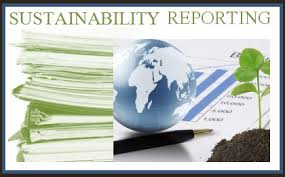 Sustainability reporting, as an issue, came out strongly this season on February 4, 2016, when ESCO Technologies hosted its Annual General Meeting (AGM). A shareholder proposal by Walden Asset Management requesting a comprehensive sustainability report, including greenhouse gas (GHG) emissions reduction goals, received 43.5% support, excluding abstentions. I was sorry to see BlackRock vote against this proposal, especially since they signed the UN-PRI calling on increased efforts around sustainability.

2016 marks the third year that ESCO Technologies has received this shareholder proposal from Walden Asset Management. From 2011 to 2015, Walden also filed a similar shareholder proposal on sustainability reporting at Emerson Electric, including a request for GHG emission reduction goals. With little progress and scant information on climate management, Walden switched its emphasis to GHG goals in 2016 while supporting Mercy Investments and Wespath on sustainability reporting.

According to Carly Greenberg, ESG Analyst at Walden Asset Management:

Both sustainability reporting and comprehensive management of greenhouse gases are important practices critical to any 21st century company. We were disappointed that Emerson Electric was making little progress on either front. The significant vote in favor of both these proposals emphasizes that both sustainability reporting and GHG goals are important to investors.

Mercy Investment Services is encouraged by Emerson Electric shareholders’ 47% vote in favor of the development of a sustainability report. This marks an 8% increase in support from last year, clearly demonstrating that more shareholders recognize the value of corporate reporting on policies, performance and improvement targets for key ESG risks and opportunities. We’re also pleased that leading proxy voting advisors ISS and Glass Lewis understood the business value in enhanced reporting in their recommendations to support the resolution.

“Support for environmental and social shareholder proposals rarely crosses above a 40% threshold,” said Greenberg. “We hope that these strong results at early AGMS is a positive signal of building investor support that will continue through the proxy voting season.”

The shareholder proponents look forward to continuing this initiative to encourage sustainability reporting at both Emerson Electric and ESCO Technologies.

Emerson Electric also received resolutions requesting more transparency on lobbying expenditures (approximately 40% support) and political spending (31% support) filed by Trillium Asset Management and The Sustainability Group at Loring, Wolcott & Coolidge, respectively. One thing I find troublesome in this area is the high frequency of abstentions on these votes. For example, out of more than 1,800 votes on disclosing political contributions at firms in which they invest, Fidelity abstained more than 75% of the time. For Vanguard it was 3,444 opportunities and they abstained 54% of the time. With regard to votes on lobbying it was even worse. Fidelity abstained 100% of the time, w

hile Vanguard did so 55% of the time. Great database for seeing which funds support and oppose all proposal types at Proxy Insight.

I’m delighted with these early results and expect support for these measures to grow over the season and into the next.