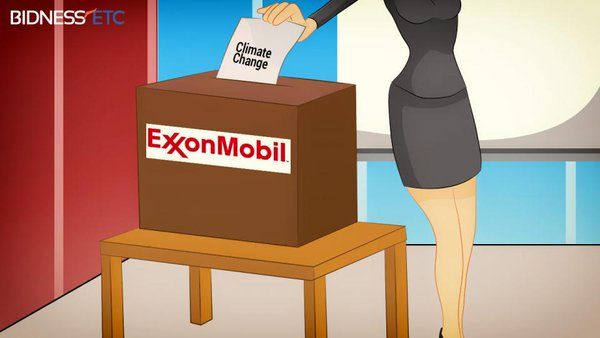 I don’t own ExxonMobil $XOM stock or the stock of any other oil companies, so won’t be examining their proxy when it comes out or making voting recommendations. However, oil companies do remain a potent economic force and won’t be going away anytime soon… even though folks like me hope to be driving around in electric cars fueled by the sun and wind within a few years.

ExxonMobil may be a special case, since they appear to have essentially funded a disinformation campaign on climate change for many years.  See Exxon Knew, among many other sources and campaigns. I thought it would be interesting to take a look at shareholder proposals grappling with the beast. If you own stock in ExxonMobil and want to be a responsible fiduciary, how do you get them to take climate change seriously?

Since the proxy hasn’t been published, I don’t know what proposals will be included. However, ExxonMobil requested four no-action letters from the SEC that were refused. Let’s look at those.

The first no-action denied was for a proposal by Kenneth Steiner, working with John Chevedden, to “hire an investment bank to explore the sale of our company. This would include a sale by dividing the company into major pieces to facilitate such a sale.”  This may be the most straightforward of the proposals. Oil prices are down, so are the stocks of oil companies. Now is a time when many overstretched oil companies may have to look for partnerships or seek sales to more stable companies.

I assume ExxonMobil has the resources to ride out low oil prices for many years. However, parting out a company often yields far more than current market value for the whole. ExxonMobil has been betting that governments around the world won’t severely restrict fossil fuels. If they are wrong, this might be the best strategy for shareholders. If we are actually going to address climate change, we may be nearing the high point for oil… even if money will still be made for decades. 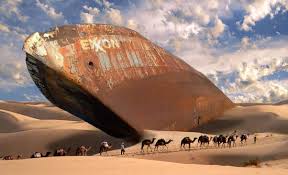 The second no-action denied was for a proposal by Arjuna Capital on behalf of Eric McCallum. The basic strategy here seems to be that if we are moving to a lower carbon world, ExxonMobil should be treated essentially as a cash cow.

There isn’t much point in exploring for what is likely to be stranded assets, so let’s operate like a tobacco company. Keep printing money until the party is over and turn the money over to shareholders in the form of increased dividends and share buybacks. Here I’m simply going to post one of the press releases from Arjuna Capital.

As Exxon and Chevron face increasingly serious climate change headwinds, the Securities and Exchange Commission (SEC) has cleared the way for shareholders to weigh in on the strategic direction of the beleaguered oil giants.  Climate-related resolutions filed by investment managers Arjuna Capital and Baldwin Brothers Inc., have survived challenges mounted by both companies at the SEC.

This is the first year a shareholder proposal asking ExxonMobil to prioritize returning more capital to shareholders in light of increasingly risky investments in potentially stranded carbon assets will be put to the ballot. Exxon was able last year to dodge the proxy measure at the SEC arguing their dividend had been increasing, despite a precipitous decline in total capital distributions and lack of a serious climate strategy.  But the SEC ruled in favor of the proponents, given three years of consecutive drops in Exxon capital distributions and an unwillingness to address the risk of unburnable carbon at the companies.

This is the second year the ballot measure will be put to a vote at Chevron Corp.

The shareholder proposals call on Exxon and Chevron to protect investor value by committing to increasing the total amount authorized for capital distributions (summing dividends and share buybacks) to shareholders as a prudent use of investor capital in light of the climate change related risks of stranded carbon assets.

A link to the ExxonMobil proposal.  The SEC Exxon decision.  The Chevron decision.

Exxon and Chevron have been outright recalcitrant on climate, denying it will have any meaningful impact on their business.  The oil majors are in the business of selling carbon, so how can they possibly be insulated from carbon asset risk? The SEC has done its job, upholding investors right to weigh in on an issue so critical to Big Oil’s future, yet so blatantly absent from Exxon and Chevron’s agenda.

In 2014, ExxonMobil wrote a report in response to Arjuna Capital/Baldwin Brothers and As You Sow on the potential for unburnable stranded carbon assets, following a landmark negotiation with the shareholders.  ExxonMobil has maintained that none of its carbon assets will be stranded, based on their internal projections of unabated global energy demand and a belief that global governments will not take meaningful action to curb global warming.

Exxon and Chevron are pushing up against a shifting tide, said Lamb. Denial is no longer a credible business plan.  Smart fossil fuel companies focus on value over growth this century.  Growth for growth’s sake is a fool’s errand when society can’t burn all the carbon we already have.  If they continue down that path, they will end up like the coal companies.

HSBC has warned the equity value of oil producers could drop 40 to 60 percent under a low carbon scenario.  And Citigroup notes 40 percent of current oil investments are stranded at prices below 75 dollars per barrel. 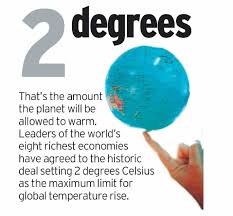 The third proposal came from a coalition led by the New York State Common Retirement Fund. This proposal throws the issue to ExxonMobil to assess the long-term impacts of public climate change policies on the company… what will it cost the company if its efforts to forestall effective global climate policy fail?

RESOLVED: Shareholders request that by 2017 ExxonMobil publish an annual assessment of long term portfolio impacts of public climate change policies, at reasonable cost and omitting proprietary information. The assessment can be incorporated into existing reporting and should analyze the impacts on ExxonMobil’s oil and gas reserves and resources under a scenario in which reduction in demand results from carbon restrictions and related rules or commitments adopted by governments consistent with the globally agreed upon 2 degree target. The reporting should assess the resilience of the company’s full portfolio of reserves and resources through 2040 and beyond and address the financial risks associated with such a scenario.

Here’s the bulk of a press release from the New York State Comptroller:

Comptroller Thomas P. DiNapoli, as Trustee of New York State Common Retirement Fund, and the Church of England co-filed a shareholder proposal at ExxonMobil in December, asking the company to assess how the worldwide effort to rein in global warming would impact its business. In response, ExxonMobil sought clearance from the Securities and Exchange Commission (SEC) to block DiNapoli’s proposal from a shareholders’ vote at its annual meeting. Today, the SEC rejected that request.

“This is a major victory for investors who are working to address the risks that global warming presents to our portfolios,” DiNapoli said. “The Securities and Exchange Commission’s determination upholds shareholders’ rights to ask for vital information. Investors need to know if ExxonMobil is taking necessary steps to prepare for a lower carbon future, particularly now in the wake of the Paris agreement. We look forward to presenting our proposal to fellow shareholders at ExxonMobil’s annual meeting.”

Edward Mason, Head of Responsible Investment for the Church Commissioners, said: “We are delighted that shareholders will have the opportunity to confirm that they would like ongoing assurance from ExxonMobil that the company is positioning itself for the transition to a low carbon economy.”

RESOLVED: Proponents request that, by February 2017 and annually thereafter in a publication such as its annual or Corporate Social Responsibility report, Exxon quantify and report to shareholders its reserve replacements in British Thermal Units, by resource category, to assist the Company in responding appropriately to climate change induced market changes. Such reporting shall be in addition to reserve reporting required by the Securities and Exchange Commission, and should encompass all energy resources produced by the company.

The idea here is to get ExxonMobil to think outside the barrel. By requesting the company report its energy reserves in terms of BTUs, rather than in terms of “barrels of oil,” the sponsors are trying to get ExxonMobil to treat all forms of energy, including renewables, as interchangeable. By doing so, maybe they can push the company to move beyond petroleum. From SEC Overrides ExxonMobil Efforts to Stifle Shareholder Activism on Climate:

This seemingly subtle provision could set the stage for Exxon to become a diversified energy company.  Here’s how: As the advocacy group points out in this filing, the change in wording is not merely symbolic.  A key metric used today is the “reserve replacement ratio,” a measure that is often tied to executive compensation. As written, energy consumed must be replaced by equivalent barrels of oil. Cleaner sources are not included as acceptable alternatives. Changing this language to allow any form of energy to replace fossil fuels consumed (without compromising a CEO’s bonus) could be a game-changer.

Danielle Fugere, As You Sow’s president and chief counsel, pleased with the SEC ruling, said: “Exxon must allow shareholders to vote on this first step on the path toward clean energy. Broad support will give management the latitude to develop a diverse and profitable low-carbon business plan, while maintaining 100 percent BTU energy replacements.”

As You Sow also filed a petition with the SEC to change this metric for the entire industry.

There you have it. Shareholders offer each other four strategies. Each one recognizes the importance climate change and its potential impact on ExxonMobil. How long can the company keep its head in the sand? Congratulations to all who worked on these proposals. Great to see Sanford J. Lewis acting as legal counsel on behalf of two groups of proponents. When I read proposals like these, I’m very glad to be doing the work I do and associating with such change agents. The real issue now is whether or not the huge mainstream mutual funds will also get their heads out of the sand and will vote in favor of these measures. Vanguard, SSgA, BlackRock, Wellington and Northern Trust own about 18% of ExxonMobil. Of those, only Northern Trust has supported about half of climate change report resolutions. SSgA supported about 13%, while the others are all close to zero. ExxonMobil is a symptom. Shareholders, especially those that have signed onto UNPRI and vote against these proposals, are the real problem.