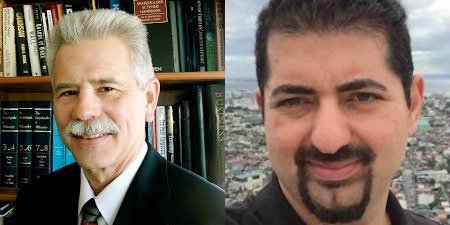 McRitchie interview by Rafat. At last week’s meeting of Whole Foods Market shareholders, I met with Matthew (Mateo) Rafat, whom I’d known of because of his series of posts at Seeking Alpha. He was the only one reporting what happened at shareholder meetings. This was the first time we had met in-person.

After the Whole Foods meeting, where my proxy access proposal received a 40% vote, Matthew and I grabbed a bite to eat. He then recorded the interview posted below. I’ve add some commentary below to make our discussion, especially my answers, a little more comprehensible.

We discussed issues of interest to many shareholders such as proxy access and how it differs from a proxy contest, why diversity is important, why shareholders submit precatory proposals rather than binding resolutions and a little about the rulemaking process.

Just having the discussion with Matt was helpful to me. Obviously, I need to do a better job explaining the concept of proxy access. I should also further explore the idea of submitting binding resolutions when seeking amendments to ‘lite’ proxy access bylaws companies have already adopted. Thanks to Matt for a great afternoon and interview.

Directors of public corporations are nominated and elected through “proxy voting.”  Nominations for director are listed on the “proxy,” which is mailed to all shareholders.  Nominations for directors, however, are not made by the shareholders themselves.  Instead, the board’s nominating and governance committee – often in consultation with management – selects the nominees.

In theory the board best knows the specific qualifications and expertise required to fill a vacancy. However, boards can be captured by management or entrenched. James McRitchie and Les Greenberg petitioned the SEC in 2002 to allow proxy access, where shareholders have the right to nominate their own representatives and place their names on the company proxy, rather than waging a costly battle with a separate solicitation. After three attempts, the SEC adopted Rule 14a-11 on August 25, 2010. Any shareholder or shareholder group (with unlimited members) that held more than 3% of a public company’s shares for more than 3 years would be eligible to nominate candidates for up to 25% of the company’s board seats.

Rule 14a-11 was stayed by the U.S. Court of Appeals for the D.C. Circuit on July 22, 2011 and then vacated by the SEC because the court decided that Rule 14a-11 was “arbitrary and capricious” in Bus. Roundtable and Chamber of Comm. v. S.E.C. See A Legal Challenge to Proxy Access. The SEC did not appeal the case, but adopted an amendment to Rule 14a-8 on September 14, 2011 to prohibit companies from excluding shareholder proposals that seek board nominations from proxy materials. Amended Rule 14a-8 allows eligible shareholders to propose proxy access standards on a company-by-company basis, rather than the universal, mandatory approach under Rule 14a-11.

Under Rule 14a-8, a company must include a shareholder proposal in its proxy materials unless it violates one of the rule’s eligibility and procedural requirements, or one of the thirteen substantive bases for exclusion specified in the rule. Below is a very simpli 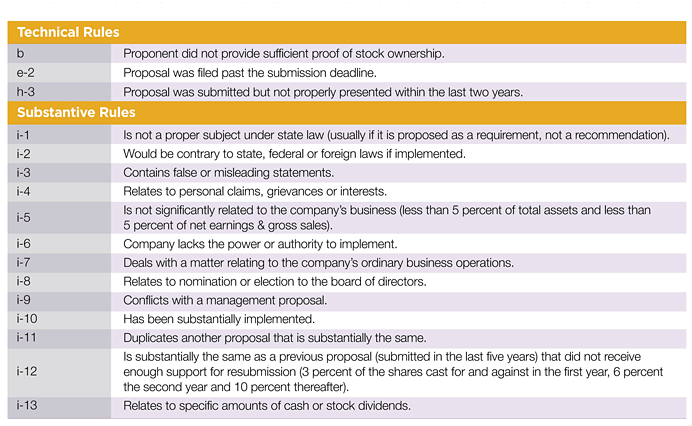 A critical issue for shareholders historically has been our relative inability to translate successful shareholder proposals into action by the board. Shareholder proposals have traditionally been couched as non-binding recommendations for several reasons. One is that many companies had supermajority requirements, providing that bylaw changes required a 2/3 vote.

Additionally, under typical state corporation laws shareholders do not have the power to require the board to take action (on the basis that requiring such action would interfere with the board’s ability to govern the affairs of the corporation). Sha 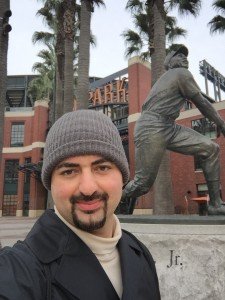 Matthew Rafat is an attorney currently licensed in CA and DC. He helps plaintiffs and small businesses with civil litigation and compliance.  Matthew has traveled to over 20 countries, most recently to the ASEAN region and OKC (which he loved).  His favorite shows are The Wire and Gilmore Girls. He blogs occasionally at willworkforjustice.blogspot.com.  Let’s encourage him to blog more about shareowner advocacy.