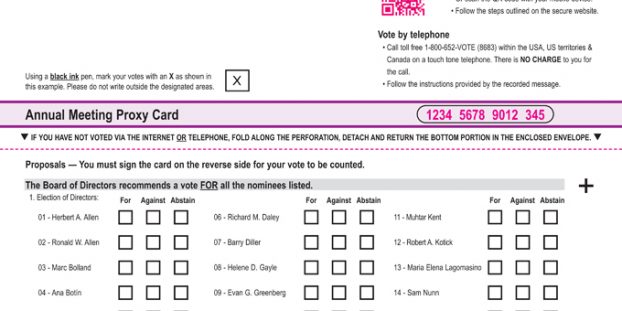 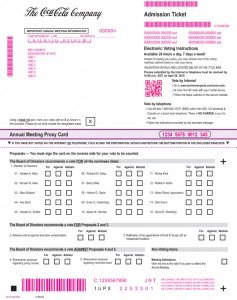 Proxy cards must be impartially labeled, according to the Securities and Exchange Commission (SEC). Rule 14a-4(a)(3) requires that proxies “identify clearly and impartially each separate matter intended to be acted upon.” (Guidance) Over and over again during the last twenty years I have written to the SEC asking them to enforce this rule on proxy cards, especially with regard to misleading or uninformative descriptions of shareholder proposals frequently provided on voter information forms (VIFs).

According to Broadridge “98% of all shares of U.S. public companies are held by institutions or retail brokerage accounts in “street name,” leaving just 2% registered through transfer agents.” (Registered Shareholders: How to Manage the Millennial Challenge) Everyone voting shares held in street names votes their ‘proxy’ using a VIF. Yesterday, the SEC finally issued clarification in the form of Questions and Answers of General Applicability: Section 301. Description under Rule 14a-4(a)(3) of Rule 14a-8 Shareholder Proposals. Should we be celebrating? Will the SEC guidance actually change behavior? Does it apply to VIFs or only to legal proxies? Who will enforce the rule? How?

My most recent complaint to the SEC was in a letter earlier this month on the QUALCOMM proxy ballot, which described my proxy access proposal as “A Stockholder Proposal, if Properly presented at the Annual Meeting.”  See SEC Protects the 2%: Qualcomm Example. As I stated in my letter:

The description of my proposal obfuscates the matter to be vote on. It is a veiled attempt to get retail and small institutional shareholders, who don’t want to be bothered reading the text of proposal in the proxy materials, to simply leave their vote item blank. If that happens, their vote will be counted as voted in accordance with the board’s recommended — “against.”

QUALCOMM’s tactic to mislead shareholders with their phony proxy card description worked. According to their 8-K filed on March 8, 2016, my proposal failed by a vote of 507,531,810 For versus 574,337,564 Against. QUALCOMM’s illegal activity may have changed just enough votes to make the difference.

I’ve raised this issue before, filing a rulemaking petition on the subject in 2009. A few examples of previous posts are as follows:

I know that as a retail shareholder and taxpayer I carry just about zero weight with the SEC, so the new guidance didn’t come about through my complaints. Instead, they were probably a result of a June 12, 2015 letter from the Council of Institutional Investors, a non-profit association of corporate, public and union employee benefit plans with combined assets in excess of $3 trillion. I applaud CII for at least getting some clarification from the SEC. I hope it doesn’t take another nine months for further clarification.

Question: Rule 14a-4(a)(3) requires that the form of proxy “identify clearly and impartially each separate matter intended to be acted upon.”  How specifically must a registrant describe a Rule 14a-8 shareholder proposal on its proxy card?

Take action: Ask the SEC Ombudsman and Investor Advocate to clarify if the new guidance applies to VIFs. How will the requirements be enforced? What are the potential penalties for violation? Contact the Ombudsman at  Ombudsman@sec.gov and the Investor Advocate at InvestorAdvocate@sec.gov.

Thank you for contacting me with your questions relating to the Compliance and Disclosure Interpretation, Section 301, Question 301.1 updated on March 22, 2016.  As you may already know, as SEC Ombudsman, I do not provide clarification, interpretive guidance, or answers concerning rule-based questions such as those raised in your email.  While your questions fall outside of the scope of my function, I trust that the information provided below is instructive and useful to you.

Issues relating to Exchange Act Regulation 14A – Solicitation of Proxies and the rules thereunder — including shareholder proposals, questions of interpretation and applicability, and related policies, practices, or procedures enforced or followed by the SEC — are within the purview of the SEC Division of Corporation Finance:

In addition to contacting the Division of Corporation Finance, you may use the Investor Complaint Form to submit your questions and complaints, along with any other information you feel is helpful, to the SEC Office of Investor Education and Advocacy (OIEA).  Attorneys and staff in OIEA handle issues and complaints relating to personal investment matters and answer general questions about the securities laws.  You may also contact OIEA by phone at 1.800.SEC.0330 (1.800.732.0330) for assistance.

For more details on proxy matters and voting mechanics, and for answers to frequently asked questions, please review the information on the “Spotlight on Proxy Matters” webpage.  Again, thank you for contacting me, and thank you for your interest in the work of the Commission.

Proxy Cards: What Others Write

Because the Staff’s interpretation was based on Rule 14a-4, it applies only to how proposals are addressed on a company’s proxy card.  Nevertheless, we would expect the Staff to hold similar views in interpreting the requirement under Rule 14a-16(d)(6) that a company’s Notice of Internet Availability contain a “clear and impartial identification of each separate matter intended to be acted on.”  Similarly, to the extent that companies are involved in reviewing and commenting on the form of voting instruction card that is distributed to street name shareholders, best practice is to conform the descriptions of proposals on the voting instruction card to the descriptions on the company’s proxy card.  Companies also are subject to the general standard of avoiding misleading statements when identifying or describing proposals within the body of the proxy statement.

Notably, the SEC does not have a rule on the form and content of the state law notice that appears at the front of companies’ proxy statements.  Thus, if a company has determined that a generic description of shareholder proposals is sufficient for the notice page of the proxy statement under state law, such as stating that the shareholder meeting agenda includes a “shareholder proposal, if properly presented,” the C&DI does not prevent that practice.  As a result, the description (if any) of those proposals on the notice page may differ from how each proposal is identified on the proxy card. 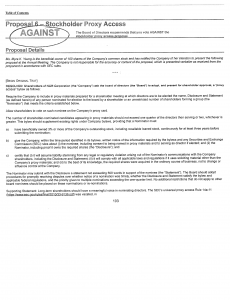 Unaddressed by the SEC’s latest guidance is the issue of trumpeting board opposition so loudly that the proposal’s subject matter is drowned out in the din. There is no provision in rule 14a-8 to support a company inserting it largest proxy font to announce opposition to a rule 14a-8 proposal in the very introduction of a rule 14a-8 proposal. The requirement of Rule 14a-4(a)(3) of ‘impartially’ would seem to prohibit such vote tampering efforts.

For example, my wife has a proposal at NCR where their “AGAINST” front is even larger than the font of the title of the proposal. Then in much smaller font is the caveat that this is the position of the board. Such billboard “AGAINST” font is a deterrent to reading the rule 14a-8 proposal. (Thanks to my good friend and colleague, John Chevedden, for spotting this quickly… we certainly hadn’t looked at the proxy yet.)

To top things off, NCR will also hold a virtual-only meeting, which shareholders are not allowed to attend in person. Disenfranchisement and trickery appear to be rampant in corporate governance. I don’t mind fighting entrenched managers and boards on the merits but these gimmicks are reprehensible.

When will the mainstream press express outrage? The handful of people reading this blog can help make a difference by publicizing these anti-democratic practices on their Facebook pages, through Twitter and by using other social media outlets.