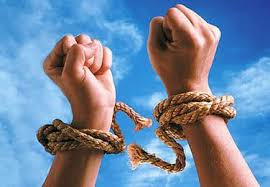 RIA hands untied by Newground Social Investments team and the SEC’s refusal to grant a no-action letter to Baker Hughes (BHI, $BHI) on February 22, 2016. Congratulations to Bruce Herbert and staff at Newground, as well as to their advisors.

We have discussed the importance of not counting abstentions before at Simple Majority Vote Counting Initiative for Proxies. Bruce has worked tirelessly in chipping away at vote counting deception for years… making some progress. However, what we are celebrating here are two precedents established that will ease the burden faced by Registered Investment Advisors (RIAs, Investment Advisor or Investment Adviser?) and their clients:

For years companies have made unsubstantiated claims and asserted the existence of specious requirements regarding proof of authorization. They have also challenged RIA on grounds that a statement of intent could only be authored by the shareholder him/herself.

Companies have won numerous challenges and blocked proposals using these spurious tactics, but as a result of the Baker Hughes ruling that is no longer the case.

Attorney Sanford Lewis did splendid work on the outline, bones, and muscle of the response – effectively countering every one of the company’s citations, and even showing some to favor Newground’s position.

Attorney Paul Neuhauser added valuable additional citations in support of our arguments (one of them Newground’s own win against Chevron two years ago).

Bruce Herbert finessed the writing and added the introduction; the summary; and two newly-framed legal concepts that helped carry the day.

Though this was submitted and won as a test case, companies are likely to push back or continue to challenge on these grounds – which makes remembering to properly use this precedent an imperative.

Bruce Herber wish celebrate his main collaborator in this effort, Sanford Lewis; and also Paul Neuhauser, Tim Smith of Walden, Steven Heim of Boston Common, as well as Holly Testa of First Affirmative. All Participated and offered sage counsel along the way.

RIA’s now have a trusted documentation template for filing resolutions. Since they don’t have to reinvent the wheel every time, my hope is that with RIA hands untied, we will see even more work on behalf of clients in filing shareholder proposals.