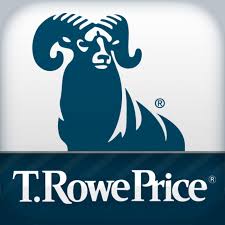 T. Rowe Price Group Inc (NASD:TROW, $TROW) is a financial services holding company. It is one of the stocks in my portfolio. Their annual meeting is coming up on April 26, 2016. ProxyDemocracy.org had collected the votes of three funds when I checked. I voted AGAINST the pay plan, compensation committee and directors with no shares. I voted FOR the auditor and the shareholder proposal seeking a report on incongruities between policies and voting practices on climate change– voting with the Board’s recommendations 13% of the time. View Proxy Statement.

T. Rowe Price Group‘s Summary Compensation Table (p. 38, why no linked index?) shows the highest paid named executive officer (NEO) was CEOJames A.C. Kennedy at $8.7M. I’m using Yahoo! Finance to determine market cap ($19B) and Wikipedia’s rule of thumb regarding classification. T. Rowe Price Group is a large-cap company. According to the Equilar Top 25 Executive Compensation Survey 2015, the median CEO compensation at mid-cap corporations was $410.3 million in 2014, so pay is well below that amount. T. Rowe Price Group shares underperformed the NASDAQ over the most recent one, two, five and ten year time periods.

The MSCI GMIAnalyst report I reviewed gave the T. Rowe Price Group an overall grade of ‘C.’ According to the report:

Similarly, Egan-Jones Proxy Services takes various measures to arrive at a proprietary rating compensation score, which measures the T. Rowe Price Group‘s wealth creation in comparison to other widely held issuers. “Needs attention” appears to be as low as they go. That’s the score they assigned to the T. Rowe Price Group . On the actual compensation advisory vote, Egan-Jones concludes:

As I have mentioned previously on many occasions, I like directors representing me to have skin in the game. If they own stock, they are more likely to look out for my interests as a shareholder. See evidence at Bhagat, Sanjai and Carey, Dennis C. and Elson, Charles M., Director Ownership, Corporate Performance, and Management Turnover. While options and unvested stock are better than nothing, I vote against directors that have served for over a year and still own no stock. At the T. Rowe Price Group that means the following: Brian C. Rogers, Edward C. Bernard, and James A.C. Kennedy with 19, 17 and 20 years on the board but still owning no stock. However, James A.C. Kennedy is retiring.

There is only one shareholder proposal on the T. Rowe Price Group proxy this year but it is a very innovative and important one filed by the Janet Axelrod 1997 Revocable Trust, co-filed by Dignity Health, Walden Asset Management, the Theodore L. Goudvis Trust, and Friends Fiduciary Corporation. In fact, I think this proposal is so important that I actually purchased shares in other funds so that I could introduce similar proposals. If we want companies to fully consider ESG issues, we need funds to do so first, since they are the major owners.

… Climate change risks and opportunities impact our decisions as an investment manager… Our investment decision processes include consideration of climate change risks and opportunities depending on the nature of the company and its underlying business. We regularly include such matters in our overall assessment of a particular company or of an industry when appropriate.

However, they don’t appear to incorporate such concerns into their proxy voting. Over the past few years funds managed by the T. Rowe Price Group have voted against the vast majority of resolutions seeking disclosure of actions taken to address climate change.
Aside from not helping to address the need for a salubrious environment,  this incongruous behavior could pose a reputational risk if they are seen as greenwash, especially in comparison with competitors.
The resolution requests the Board of Directors assess and report on incongruities between the proxy voting practices and policy positions regarding climate change. I’m delighted to see Egan-Jones recommending:

A detailed report explaining any incongruities between the companies stated policies is critical tool for investors to understand and control the risks posed by such incongruities. Because of this we recommend a vote “FOR” this Proposal.

Please vote in For proposal #4 to report on incongruities between policies and voting practices on climate change.

T. Rowe Price Group: CorpGov Recommendations Below – Votes Against Board Position in Bold

In addition to the votes reported on ProxyDemocracy.org, Texas Teachers Retirement System reported all votes in favor the board’s recommendations. It is early days for this proxy, so Proxy Insight had only one additional fund vote reported. Colorado PERA voted with management on all issues I’m reporting early because their are so many upcoming votes ahead. I need to move on to the next ones.

T. Rowe Price Group: CorpGov Recommendations Below – Votes Against Board Position in Bold

Any stockholder who wishes to submit a proposal or nominate a director for consideration at the 2017 Annual Meeting and include that proposal or nomination in the 2017 proxy statement should send their proposal to T. Rowe Price Group, Inc., c/o Chief Legal Officer and Corporate Secretary, 100 East Pratt Street, Mail Code BA-1360, Baltimore, MD 21202 and comply with the notice and other requirements described below.

Proposals must be received no later than November 18, 2016, and satisfy the requirements under applicable SEC Rules (including SEC Rule 14a-8) to be included in the proxy statement and on the proxy card that will be used for solicitation of proxies by the Board for the 2017 Annual Meeting.