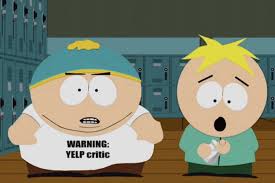 Yelp Inc. ($YELP) operates a platform that connects people with local businesses primarily in the United States. Yelp is one of the stocks in my portfolio. Their annual meeting is coming up on April 13, 2016 and I have a lot of voting recommendations to make ProxyDemocracy.org had collected the votes of one fund when I checked. Yes, I’m a Yelp critic, voting AGAINST pay plan, compensation committee and omnibus stock plan, voting with the Board’s recommendations 33% of the time. View Proxy Statement.

Yelp’s Summary Compensation Table shows the highest paid named executive officer (NEO) was Chief Revenue Officer Jed Nachman at $3.2M. I’m using Yahoo! Finance to determine market cap ($1.6B) and Wikipedia’s rule of thumb regarding classification. Yelp is a small-cap company. According to the Equilar Top 25 Executive Compensation Survey 2015, the median CEO compensation at small-cap corporations was $2.7 million in 2014, so pay is above that amount. Yelp shares underperformed the S&P 500 over the most recent one, two, and five year time periods.

The MSCI GMIAnalyst report I reviewed gave Yelp an overall grade of ‘C.’ According to the report:

Similarly, Egan-Jones Proxy Services takes various measures to arrive at a proprietary rating compensation score, which measures Yelp’s wealth creation in comparison to other widely held issuers. “Needs attention” appears to be as low as they go. That’s the score they assigned to Yelp Inc. On the actual compensation advisory vote, Egan-Jones concludes:

Because of the issues noted above, including above median pay and underperformance, I would have voted against the pay plan (if given the opportunity) and compensation committee: Peter Fenton, Chair, and Fred Anderson.

As stated above, I voted against members of the compensation committee.  Egan-Jones Proxy Services includes the following comment in its more extensive analysis regarding election of directors:

There is a single slate of nominees, the nominees appear qualified, however, the Company earns a compensation score of “Needs Attention”, and as such, we recommend that clients “WITHHOLD” votes from the members of the Compensation Committee, namely Fred D. Anderson, Jr. and Peter Fenton.  Egan-Jones believes that the Compensation Committee should be held accountable for such a poor rating and should ensure that the Company’s compensation policies and procedures are centered on a competitive pay-for-performance culture, strongly aligned with the long-term interest of its shareholders and necessary to attract and retain experienced, highly qualified executives critical to the Company’s long-term success and the enhancement of shareholder value.

I also voted against amending the omnibus stock plan. Although I am very much in favor of substantive employee ownership at Yelp and incentivizing all employees, this plan is too dilutive. Egan-Jones Proxy Services‘  analysis includes the following conclusion:

We note however, after taking into account the maximum amount of shareholder equity dilution this proposal could cause, as well as both the quantitative and qualitative measures outlined above, we believe that shareholders should not support the passage of this plan as proposed by the board of directors. We recommend the board seek to align CEO pay more closely with the performance of the company and work to reduce the cost of any similar plan that may be proposed in the future. Therefore, we recommend a vote “AGAINST” this Proposal.

None. Although Yelp Inc has many issues for future proposals, it also has unequal voting… so shareholders are probably reluctant to put in a lot of work for the small likelihood of passage. Dual-class shares should be transitioned away. See Controlled Companies Underperform, Overpay.

Yelp Inc: CorpGov Recommendations Below – Votes Against Board Position in Bold

In addition to the votes reported on ProxyDemocracy.org, Proxy Insight reported on Colorado PERA and Canada Pension Plan Investment Board (CPPIB). CPPIB voted with management on all issues except the omnibus stock plan. They joined in voting against.

To be considered for inclusion in next year’s proxy materials, you must submit your proposal, in writing, by November 4, 2016 to our Corporate Secretary at 140 New Montgomery Street, 9th Floor, San Francisco, California 94105, and you must comply with all applicable requirements of Rule 14a-8 promulgated under the Securities Exchange Act of 1934, as amended, or the Exchange Act.