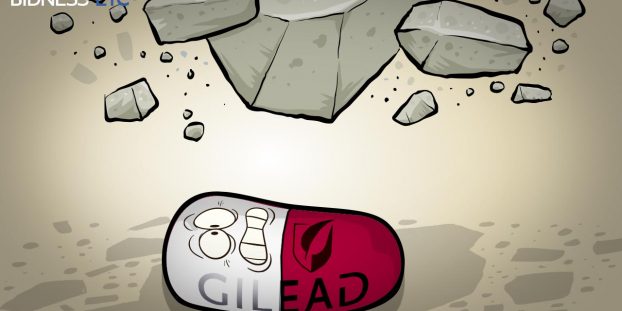 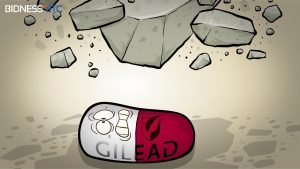 Gilead Sciences, Inc. (NASD:GILD, $GILD) is a research-based biopharmaceutical company that discovers, develops and commercializes innovative medicines. It is one of the stocks in my portfolio. Their annual meeting is coming up on May 11,2016.  ProxyDemocracy.org had collected the votes of three funds when I checked. Vote AGAINST pay, compensation committee, bonus plan. FOR proposal to allow shareholder action by written consent. I voted with the Board’s recommendations 46% of the time. View Proxy Statement.

Gilead Sciences, Inc’s Summary Compensation Table shows the highest paid named executive officer (NEO) was CEO/Chair John C. Martin at $18.8M. I’m using Yahoo! Finance to determine market cap ($133B) and Wikipedia’s rule of thumb regarding classification. Gilead Sciences, Inc is a large-cap company. According to the Equilar Top 25 Executive Compensation Survey 2015, the median CEO compensation at large-cap corporations was $10.3M in 2014, so pay is higher than that amount. Gilead Sciences, Inc‘s shares outperformed the S&P 500 over the most recent two, five and ten year time periods but not during the most recent one year period.

The MSCI GMIAnalyst report I reviewed gave Gilead Sciences, Inc an overall grade of ‘C.’ According to the report:

Our qualitative review of this Company’s compensation has identified one minor issue: the CEO’s salary at $1,727,423 exceeds the $1 million dollar deducibility limit imposed by section 162m for salaries and non-qualified incentive payments. Failure to abide by IRS 162m rules results in loss of deductibility for the compensation in question and possibly increased and unnecessary tax payments. While this issue is not sufficient to trigger a negative vote alone, it does impact the Company’s overall compensation score, we would recommend the board investigate and consider alternative means of compensation for the CEO and any other 162m covered NEOs who exceed this limit in the future…

Given the issues above, including pay over median, I voted Against the pay package and the compensation committee: Kevin E. Lofton, John W. Madigan, Nicholas G. Moore and Per Wold-Olsen.

Egan-Jones recommended in favor of all directors except members of the compensation committee. I concurred.

With regard to the Bonus Plan, despite EJ recommending in favor, I voted AGAINST. Only 18 employees eligible. I think they need to broaden and better align incentives. It is not just top executives who add value.

The only shareholder proposal on the proxy is my proposal to allow shareholders to take action by written consent. This is a simple ‘good governance’ measure to reduce the likelihood of entrenchment.  Allowing written consent is associated with higher share values. See classic study by Gompers, Paul A. and Ishii, Joy L. and Metrick, Andrew, Corporate Governance and Equity Prices. Vote For. This proposal won 53% as far back as 2012 at Gillead Sciences, Inc and still has not been implemented by the board.

Gilead Sciences, Inc: CorpGov Recommendations Below – Votes Against Board Position in Bold

In addition to the votes reported on ProxyDemocracy.org, Proxy Insight reported on Canada Pension Plan Investment Board (CPPIB) and Texas Teachers (TRS) which both voted FOR all items, including my proposal on written consent.

You may submit proposals for consideration at future stockholder meetings. For a stockholder proposal to be considered for inclusion in our proxy statement for the 2017 annual meeting of stockholders pursuant to SEC Rule 14a-8, the Corporate Secretary must receive the written proposal at our principal executive offices no later than November 28, 2016. Such proposals also must comply with SEC regulations under Rule 14a-8 under the Securities Exchange Act of 1934, as amended (the “Exchange Act”), regarding the inclusion of stockholder proposals in company proxy materials. Proposals should be addressed to: Gilead Sciences, Inc., 333 Lakeside Drive, Foster City, California 94404