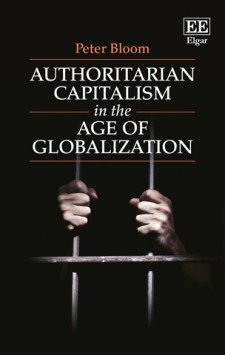 Peter Bloom, of the Department of People and Organisations at The Open University in the UK, takes on a very ambitious project in his recently published book

, Authoritarian Capitalism in the Age of Globalization. In a strong critique of neoliberalism, Bloom argues that marketization does not inexorably lead to democratization, it more frequently leads to authoritarian capitalism.

Marketization and globalization incentivize governments to pursue coercive forms of politics favoring foreign investors and corporations at the expense of popular opinion and public welfare. Although he focuses on transitional economies such as Singapore, Mexico, China and Russia, I can see how his analysis fits nicely with the rise of Donald Trump in America.

The emphasis has shifted from informed democratic debate about the purpose of government to a tacit recognition by all that the state is here to support capitalist expansion and globalization. Individuals and countries must ‘self-discipline’ themselves, adopting market-based values.

While democracy is always contingent, never complete, authoritarian capitalism is often built on a fantasy of recovering lost glory by curtailing civil liberties and declaring a neve r ending war on drugs, terrorism, immigrants and other ‘enemies’ to protect and grow markets.

Internationally, the IMF and World Bank have encouraged authoritarian capitalism in the name of maintaining ‘responsible’ financial order.

If there is only one correct path toward progress, and moreover it is already in motion [global marketization], then what agency is left to individuals? …

As corporate globalization grows so to does the desire for authoritarian state power.

In applying Bloom’s analysis of mostly developing nations to the United States, I would have to say that we too are increasingly looking for technocratic political leadership. Which candidate would be best at privatizing and deregulating? “It’s the economy stupid.” Too many Americans are now looking for a CEO, not a politician. In place of democratic debate, individuals reinvest themselves by proxy in the dreams of corporate executives and presidents who can live out their fantasies as powerful agents.

Although the role of the state hasn’t really diminished. The focus has changed. With the growing gap between rich and the rest of us, there is increased emphasis on policing and coercion. While corporate governance has arguably gotten a little more democratic, government has increasingly taken on corporate characteristics.

I could quibble with some of terms of Bloom’s analysis but it would be mostly around the edges. Bloom sums up our global trajectory quite nicely in the last few pages:

The traditional assumption that markets will lead to democracy has been transformed into a twenty-first century story of authoritarian progress, where a fiscally self-disciplining state and disciplining international institutions will use their power to ensure that countries around the world develop and prosper. Required is not democracy, deliberation, debate, experimentation or a rethinking of core values. Instead all tat is needed is for governments and IFIs to rule populations with a firm and ‘responsible’ hand…
Significantly, the more capitalism grows globally, the more it relies on the power of governments for its survival… A crucial component of neoliberalism is the channeling of this agency into an authoritarian mandate for governments to police themselves and their citizens in line with capitalist values.

Bloom ends with a bleak plea, “A vital concern for the twenty-first century is whether we can, thus, break free from the global ‘grip’ of authoritarian capitalism.” For someone who has obviously thought long and deeply about the problem of authoritarian capitalism, Bloom offers little if anything in the way of solutions. Perhaps that’s another book?

2 Responses to Authoritarian Capitalism in the Age of Globalization