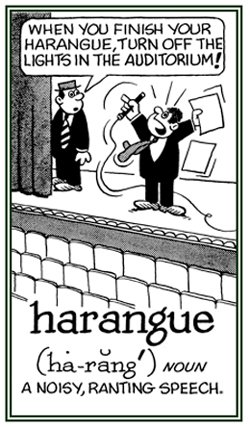 Haranguing – A speech addressed to a large public assembly; a popular oration; a loud address to a multitude; in a bad sense, a noisy or pompous speech; declamation; ranting. A speech before a multitude or on the hustings.

In an otherwise fairly balanced article on the positives and negatives of online shareholder meetings, Solomon writes,

Perhaps more important, a virtual shareholder meeting allows the company to manage troublesome shareholders and their often uncomfortable questions. Some of this may provide a welcome limit on the time monopolized by corporate gadflies such as John Chevedden, James MacRitchie and William Steiner, who are responsible for a staggering 70 percent of shareholder proposals. These individuals not only like to propose company action, they make a habit of haranguing directors at corporate meetings.

I shot a quick e-mail to Professor Solomon… not a diplomatic as I should have been but with the intent of getting him to correct his inaccuracies:

Crazy talk in an otherwise good article on lockout shareholder meetings makes you look uninformed. Are you trying to emulate Donald Trump or something?
Where did you come up with “John Chevedden, James MacRitchie and William Steiner, who are responsible for a staggering 70 percent of shareholder proposals”?  That’s crazy out of bounds.  We might do 70% of the proposals filed by individuals at the top 250 companies studied by the Manhattan Institute. Is that what you meant to say? That’s the only way I can think of how you came up with such a number. If so, you certainly left off a lot of qualifiers. Everyone in the industry knows how wrong your statement is and I’ve already heard from several.
“they make a habit of haranguing directors at corporate meetings.” Can you provide ONE example of me ever “haranguing” a director at a corporate meeting? No you can’t, because it has never happened. Why would you say such a thing? I don’t understand your motivation for such a statement.

I got the following response,

Thanks Jim – I’ll put in for a correction. Hope all is well. –S

An earlier version of this column misspelled the surname of one of the shareholders known for their questioning during corporate meetings. He is James McRitchie, not MacRitchie.

I wrote back questioning why substantive corrections were not made.

OK, now I see you corrected the 70%. Why not the acquisition of haranguing directors at corporate meetings? I think Bill Steiner is in his mid-eighties and hasn’t even been to a corporate meeting in at least five years.

I repeat, can you provide one instance of one of us ‘haranguing’ directors at a meeting?

No specific incident was ever specified; no correction to the ‘haranguing’ acquisition appears to be forthcoming. Two years ago, according to Solomon, our  proposals were “costing companies tens of millions of dollars and creating big fights in the courts.” (It was companies who chose to waste money on futile court cases against us.) This time we are supposedly haranguing directors at annual meetings. He goes on to say haranguing is a ‘good thing.’

To be sure, these meetings can be a pain, but even the haranguing can be a good thing, forcing management to confront its entrenched biases. The gadflies may be persistent, but they also may be right…
Let’s hope that Intel and these other companies reconsider next year. This is a chance for each of these companies to bond with shareholders, not put them in a digital box.

Most annual meetings are rather perfunctory events. Almost all the votes have generally been cast before the meeting. Frequently, many directors are absent and the audience is made up largely of company employees. Presenters usually have two to five minutes to present what are sometimes fairly complex proxy proposals. In that atmosphere, why Professor Solomon thinks I would be haranguing directors, I don’t know. Plus, if I made a habit of haranguing directors, my fellow Canadians would be reminding me of the need to be polite. We have a reputation to maintain; I wouldn’t have to wait for Solomon. However, I do thank him for coming out against virtual-only meetings, although he could have more clearly endorsed hybrid meetings.
Professor Solomon apparently still feels compelled to exaggerate. Why? My guess is that sensationalism sells. We are engaged in a power struggle. Many shareowners want what corporate ‘gadflies’ are pushing: majority voting requirements for directors, declassified boards, proxy access, etc. A growing number of corporate managers want to keep corporate governance activists at a distance, so we cannot easily communicate with other shareholders, company employees or the press.
Delaware law allows companies to virtually lockout shareholders from their meetings. If shareholders can hear the proceedings, that’s good enough. As risk management consultant Glyn Holton noted in a guest commentary (Guest Commentary From Glyn Holton: Emergency at Intel),

We reject Delaware’s law in the same way abolitionists rejected the Supreme Court’s Dred Scott decision in 1857. A corporation that doesn’t hold shareholder meetings is dead in the same way that a human being that doesn’t breathe is dead. Putting up a website and calling it a “meeting” doesn’t change that.

Why aren’t the facts interesting enough on their own? Professor Solomon argues companies should “bond with shareholders, not put them in a digital box.” I would ask the Deal Professor to do the same – bond with shareholder advocates, instead of making us out as corporate gadfly caricatures.