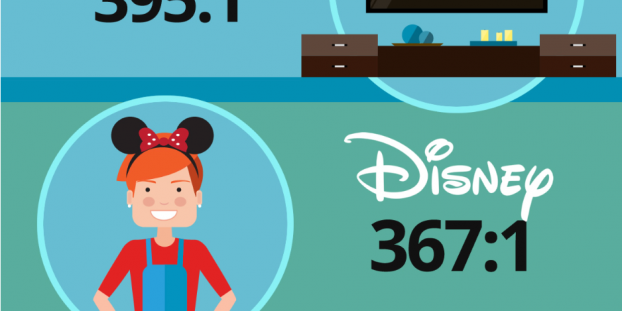 Starting fiscal years beginning in January, companies must disclose CEO pay ratios to the median compensation of their employees. Companies have flexibility with regard to sampling and other methodologies, according to how the SEC has interpreted the Dodd-Frank Act. In preparation, PayScale and Equilar surveyed employee sentiment on CEO pay ratios.

Do employees know what their CEO earns? If so, do they think it’s fair? If they believe it’s not fair, does it negatively affect their perception of their employer? And, finally, does CEO pay have any effect on the ability of a company to retain its employees? Additionally, they asked some CEOs to weigh in with their thoughts on the SEC rule and their approach to employee communication as it pertains to executive pay.

Equilar provided pay data for some of the the highest-paid CEOs in the U.S. and PayScale provided median worker pay data for those same companies. They then calculated the CEO pay ratios between the CEO at each company and their employees. Many CEOs do receive substantial stock/option grants and perks as part of their compensation, but the firms don’t currently have similar data available for employees, so they looked solely at cash compensation to calculate ratios for this report. However, they did provide the Equilar data on Total CEO Pay as well, so that it’s clear how much of each CEO’s pay is in the form of cash vs. stock/options/perks.

“Do you feel like your CEO (or top executive) is compensated appropriately for their role?”

If no, “Does your CEO’s pay negatively impact your view of your employer?”

They examined aggregated responses to both of these questions by gender, generation, industry, job level, and pay range. They then excluded responses to questions with fewer than 40 responses (represented with “N/A”). They used a total of 22,162 responses collected between June 9th, 2016 and July 10th, 2016. 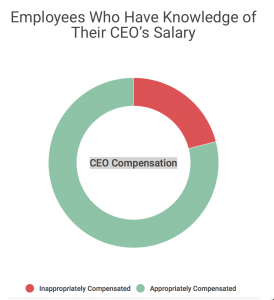 Among employees who did have knowledge of their CEO’s salary, only 21 percent thought it was excessive, leaving 79 percent who didn’t see a problem.

PayScale has a great little chart to help you see graphically how CEO pay ratios compare by industry under the heading Putting CEO Pay in Perspective.

PayScale learned in a 2015 study on employee engagement that transparent compensation planning—i.e. explaining to employees why and how pay decisions are being made, and even providing insight into company finances—can result in greater employee engagement and happiness than a raise. In fact, 82 percent of employees we surveyed felt satisfied if they were underpaid but the employer communicated the reason for the smaller paycheck. Clear communication around pay was actually one of the most influential factors when it came to employee sentiment. 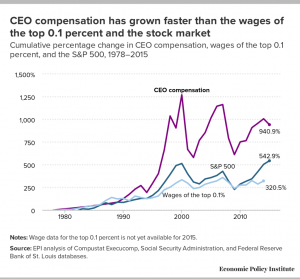 So, the short answer is more knowledge is unlikely to drive employees into a frenzy. If you don’t think you can have an impact on your CEO’s pay, you probably don’t want to get worked up about it. You’ll just get sick with anxiety. How many peasants revolted against their kings? However, my sense is that as pay ratios are disclosed and become more widely known, strategies concerning how to deal with the issue will blossom. There will be more options than just voting for Bernie Sanders.

Equilar is the #1 provider of corporate governance solutions, collecting data on more than 140,000 executives and board members from thousands of public companies. Our cloud-based platforms organize this data into easily digestible formats, delivering executive compensation benchmarking and shareholder engagement tools with accuracy and integrity. These platforms bring together companies, shareholders and advisors to inform better business decisions and drive exceptional results. Founded in 2000, Equilar is trusted by more than 60% of the Fortune 500 and investors with $13 trillion assets under management, and is cited regularly by The New York Times, Bloomberg, Forbes, Fortune, Associated Press, CNN Money, CNBC, The Wall Street Journal and other leading media outlets.

CEO Pay: How Much Do CEOs Make Compared to Their Employees?

How Do American Workers Feel About the CEO-to-Worker Pay Ratio?

Commonsense Principles: Ground Floor
The Handbook of Board Governance: Part 4