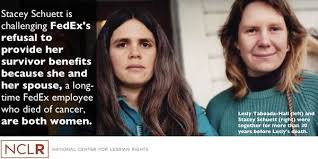 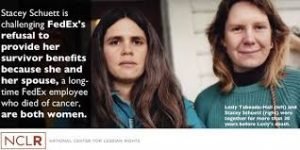 However, the following came in today from my friend of NorthStar Asset Management, Inc. concerning their proposal #7 Report Application of Company Non-Discrimination Policies in States With Pro-Discrimination Laws. Of course, I would vote for it 100 times over if I could, so I thought her words worth repeating. State-promoted discrimination is akin to state-sponsored terrorism, as far as I’m concerned. We have to fight it on every front.

FedEx LGBT Employees Are Depending on Our Vote

At the upcoming FedEx Corporation (NYSE: FDX) annual shareholder meeting (September 26, 2016), stockholders are asking for details about strategies that FedEx will deploy to defend the company’s LGBT (lesbian, gay, bisexual, and transgender) employees and their families against discrimination and harassment that is encouraged or enabled by new legislation in several states in the U.S., such as North Carolina’s infamous “bathroom bill.”

In recent months, several “religious freedom bills” have been introduced or passed in parts of the United States which actively discriminate against LGBT individuals and families, putting FedEx’s employees, as well as their partners and children, at risk of violence and discrimination, according to an SEC filing submitted by NorthStar Asset Management, Inc., a Boston-based socially responsible investment firm that sponsored the shareholder proposal on this issue. Said Julie Goodridge, CEO of NorthStar Asset Management, Inc (“NorthStar”):

We believe that there is real risk to the company if FedEx fails to consider the impact that loss of housing, public accommodation, and the accompanying public harassment and humiliation will have on long term, dedicated and trained LGBT employees. 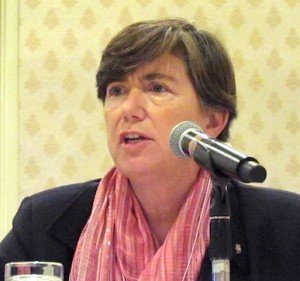 Reaction to North Carolina’s House Bill 2 (“HB 2”) passed last March was swift. In April, PayPal abandoned plans to open a facility in Charlotte because the law “bars local governments from extending civil rights protections to gay and transgender people.” Apple and Microsoft joined other major U.S. companies in signing a statement opposed to “anti-LGBT” legislation.  At least 160 CEOs and business leaders have signed a letter organized by the Human Rights Campaign urging Governor Pat McCrory and the North Carolina General Assembly to repeal the “radical provisions in the deeply discriminatory law that was rammed through the legislature.”  In the letter, signatories stated that “HB 2 will make it far more challenging for businesses across the state to recruit and retain the nation’s best and brightest workers and attract the most talented students from across the country.”  FedEx has yet to take a public stance on the discrimination implicit in these laws.

The reality is that if employees and their families are suddenly at risk in their communities, their ability to perform at work will suffer.  Who’s to say that a FedEx driver won’t be banned from a community, unable to perform their job because they are perceived to be LGBT? What if marrying your partner of two decades results in loss of housing?  Is FedEx prepared to relocate harassed employees to states where the laws are less discriminatory? This type of legislation can have a huge impact on morale and the bottom line.  We believe companies need to have a plan in place for addressing these issues.

FedEx has a broad EEO policy which includes protections for employees from discrimination on the basis of sexual orientation and gender identity.  NorthStar believes that FedEx has a duty to speak out against these discriminatory state policies. 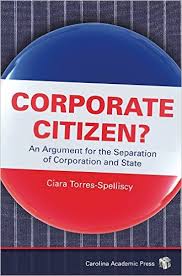 For those wanting a little more, read Torres-Spelliscy: Corporate Citizen?, especially the section of the book on Hobby Lobby. See also, What the Supreme Court’s Hobby Lobby Decision Means for LGBT People.