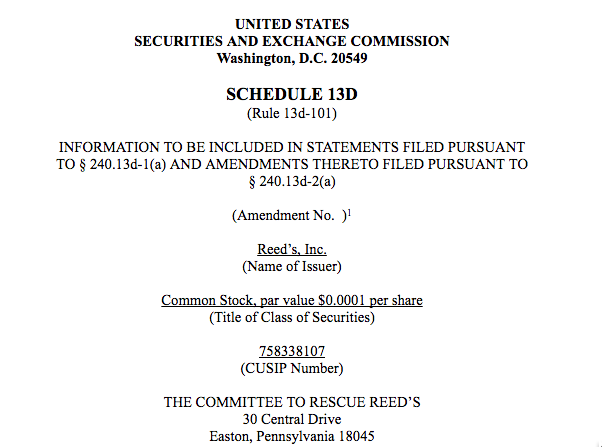 Schedule 13D Filed by the Committee to Rescue Reed’s

On October 11, 2016, the Committee to Rescue Reeds issued a statement concerning the breakdown in its recent good-faith efforts to work with the Issuer’s Chairman of the Board and CEO, Chris Reed, to reach a mutually agreeable director slate and avoid a proxy contest at the 2016 Annual Meeting. In its statement, the Committee noted that it remains hopeful that an expanded, mutually agreeable slate of nominees will ultimately be agreed upon by the parties, but that as of October 6, 2016, the independently mediated process the Committee and Mr. Reed had previously agreed to was obstructed by Mr. Reed’s failure to provide the names and contact information of the Board’s recommended nominees.

Following the breakdown in the discussions with Mr. Reed and his failure to act in good faith in furtherance of achieving a unified Board slate, coupled with his unfounded claims in the media regarding the credentials of the Committee’s members and Nominees, Joseph Grace, a former Board member of the Issuer, resolved to join the Committee and to assist in the Committee’s efforts to reconstitute the Board and institute best-in-class governance practices at the Issuer. Consequently, the Committee continues preparations for a proxy contest to elect its slate of five (5) highly qualified independent director candidates at the upcoming 2016 Annual Meeting.

The Schedule 13D filed by the Committee with the SEC shows the aggregate amount of Shares beneficially owned by the Reporting Persons constitutes 6.4% of the Issuer’s outstanding Shares.

The Committee to Rescue Reed’s Counsel: