As I indicated yesterday, I have been contacted by several reporters for comments on the latest screed from the Business Roundtable seeking to muzzle the rights of shareholders. Although I have much more productive ways to occupy my time, it does make sense for me to provide at least some response, since the Business Roundtable names me among those “pursuing special interests… frequently at a significant cost to the company.”

Their statistics do not come from an objective third party, such as Proxy Insight, but from the conservative Manhattan Institute‘s Proxy Monitor (funded in part by the Koch Family Foundations), covering only 250 out of thousands of American companies. The Business Roundtable titled their report Responsible Shareholder Engagement And Long-Term Value Creation: Modernizing the Shareholder Proposal Process. Don’t be fooled by the numbers they use, claiming few proposals pass. The Business Roundtable doesn’t count proposals that don’t make it to the proxy because proponents and companies have reached agreement. They don’t count proposals filed at the thousands of small companies, which tend to have poorer corporate governance practices. ‘Modernization’ for the Business Roundtable means moving the SEC further and further from its primary mandate of ‘investor protection’ by creating a democracy-free zone for entrenched managers.

Right up front, let’s deal with the allegation of ‘proposal by proxy’ made over and over again by the Business Roundtable. ‘Proposal by proxy’ is a derogatory term made up by attorneys suing one activist, John Chevedden. Just like companies  frequently use expert services, such as outside counsel, to help them with ‘no-action’ requests to the SEC or in filing litigation, shareowners often ask Chevedden for help in filing proposals. Who better to help than the person who has filed more proposals than anyone in history?  Would an aspiring quarterback pass up tips from Tom Brady? The issue is a red herring.

The Business Roundtable wants the submission threshold raised from $2,000 held for one year to anywhere from 0.15% to 3% held for a longer time-frame. I have a proxy access proposal pending at Apple, which I discussed yesterday. Using that as an example, I would have to own shares for some unspecified period with a market value of between $911M and $17B to qualify. Looking at the shareholder list above that amount, I see Vanguard, SSgA, and BlacRock but not Fidelity. I don’t recall any of those funds ever submitting a shareholder proposal. Entrenched managers would be well protected from shareholders by the SEC under the Business Roundtable’s directions. What happened to protecting investors? That is supposed to be the central mission of the SEC.

Currently, shareholders must supply their name, address and must provide evidence they own the required shares. Companies frequently choose not to disclose this information on the proxy and will only provide it to shareholders upon request.

The Business Roundtable wants proponents “to disclose their motivations, goals, economic interests and holding in the company’s securities and any similar proposals they have submitted at other companies (as well as the results of those proposals).”

Maybe the object is to fill up the whole 500 words available for proposals with the proponent’s life story, instead of discussing the issue. How about requiring companies to fully disclose their motivations, goals and interests in political contributions and lobbying? That would be more relevant.

Prohibit or Set Limits on the Use of Images

This is a minor issue that has only recently come up. The SEC should get some more experience before setting rules in this area.

Upping the required threshold for resubmissions would stultify debate. Issues like poison pills, declassified boards, majority voting for directors, and proxy access have taken years of arguments to sway shareowners. Just like science doesn’t move to a new paradigm until a more promising one becomes compelling, it often take years to change opinions on corporate governance or social issues impacting businesses.

Yes, this definition fluctuates just like many other definitions of ‘ordinary’ in everyday life. What is ordinary business one day is deemed illegal or immoral as social norms change. Let’s not go back to segregated waiting rooms in bus stations.

The Business Roundtable cries over the fact that companies can no longer receive a proposal from a shareholder and exclude it by simply make a minor change in the same subject area. The guidance put out last year didn’t set a new regulation, it simply reminded participants of the original interpretation of the rule, before the loophole became a super highway after years of abuse.

Regarding false, misleading or vague statements, the Business Roundtable’s notion that we should reverse the burden of proof is ridiculous. Investors are required to file proposals months in advance of when companies write their proxy statements. During that time, the world goes on and facts change. You can’t prove something will be true several months in the future. Investors have 500 words to both make their arguments and for the text of their proposals. The company is under no word limit for their rebuttal. If they can’t make their case in a rebuttal, the proposal should pass, despite inaccuracies.

Sending any proposal claiming to involve a ‘significant policy issue’ to the full Commission for decisions would drown the Commission in an endless procession of paperwork and debate, taking them away from more important work, like setting policies to protect the investing public.

According to the Business Roundtable, the process needs modernized:

The shareholder proposal process has evolved considerably since first introduced in the 1940s. Increasingly, the current shareholder process fails to promote an effective channel of communication between shareholders and companies, especially with regard to matters material and of long-term value to the company.

SEC v. Transamerica Corp. (3d Cir. 1947) was the first and only case in which the SEC brought suit to compel an issuer to include a shareholder proposal. As Jill E. Fisch notes in The Transamerica Case.

The Transamerica decision represented the high point in SEC protection of shareholder voting. Rule X-14A-7 afforded shareholders the broadest power with respect to the introduction of shareholder proposals; it imposed no qualification requirements, limits on the number of proposals allowed or subject matter limits.

Since 1947 the legal rights of shareowners have been constantly eroding. Now, the Business Roundtable wants those dealing with proxy proposals to virtually disappear. Nell Minow argues that Corporate First Amendment rights belong to the shareholders.

The Business Roundtable’s recommendations would do nothing to protect investors or promote fair markets and capital formation. Instead, they would essentially sanction the complete turnover of the shareowner’s proxy to managers to facilitate their own entrenchment, with the possible exception that some rights to submit proxy proposals might still be maintained by hedge funds. Mainstream mutual funds don’t submit proxy proposals. They compete on low cost. Every dime they spend submitting a proposal is a dime their competitors don’t have to spend. Every dollar they earn through improved corporate governance is also a dollar earned by their free-riding competitors.

The fact that three of us submit such a large proportion of proposals is a sign that something is wrong. However, the problem isn’t that we are “pursuing special interests… frequently at a significant cost to the company.” The real problem is that other shareholders aren’t acting as responsible shareowners. Most shareholders don’t even bother to vote, let alone make suggestions as to how our companies can be improved. Keep in mind, proposals are not mandates. Shareholders are voting on whether or not to make suggestions to the board.

Our most frequent proposals are for proxy access, majority voting requirements to elect directors, requiring annual elections for all directors and other ‘good governance’ measures. How can such topics be characterized as “pursuing special interests”?

With regard to cost, nothing has driven up the cost of proxy proposals recently more than the Business Roundtable’s lawsuit (along with the US Chamber of Commerce) against the SEC overturning Rule 14a-11, which would have imposed proxy access on all companies. Instead of a uniform rule applying to all publicly traded companies, we now have a whole army of attorneys fighting proxy access proposals at every company and analyzing the latest trends. Millions are being spent in time-consuming process. We are headed to nearly the same set of rules as those overturned by the Business Roundtable but with enough variation to keep hundreds of attorneys fully employed.

The legal rights of shareowners to oversee corporate governance have been eroding since 1947. I, for one, am not about to roll over and watch a substantial body of our remaining rights disappear at the request of the Business Roundtable. Corporations should not be democracy-free zones. 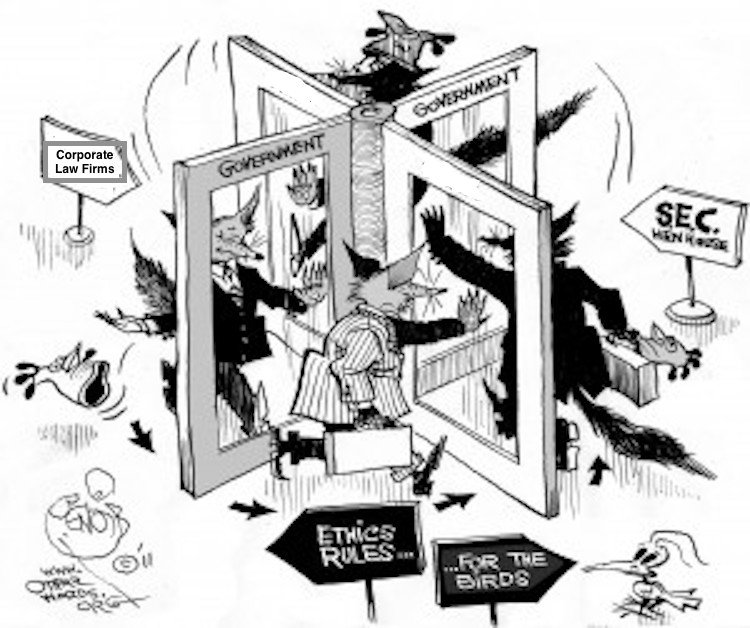 I don’t mean to imply the proxy proposal process is perfect. I would love to see it go back to empowering shareholders as it did in 1947. However, I think the likelihood of repealing all those regulations and guidance documents are slim.

One reform that could be made is to slow down the revolving door between those who issue no-action letters at the SEC and those who request them on behalf of companies. One minute Marty Dunn is heading the SEC’s Division of Corporate Finance… the division that issues the no-action letters. A short time later, he’s sending no-action requests to the SEC on behalf of many of the corporations in my portfolio.

I certainly don’t mean to pick on Mr. Dunn. One of his missives just happens to be in front of me. That revolving door is taken by many at the SEC. Are they financially rewarded with a higher paying job after finding a new loophole and issuing a new no-action variant?  I won’t make that claim but the setup is one that seems to invite conflicts of interest. What does the Business Roundtable have to say about that issue?