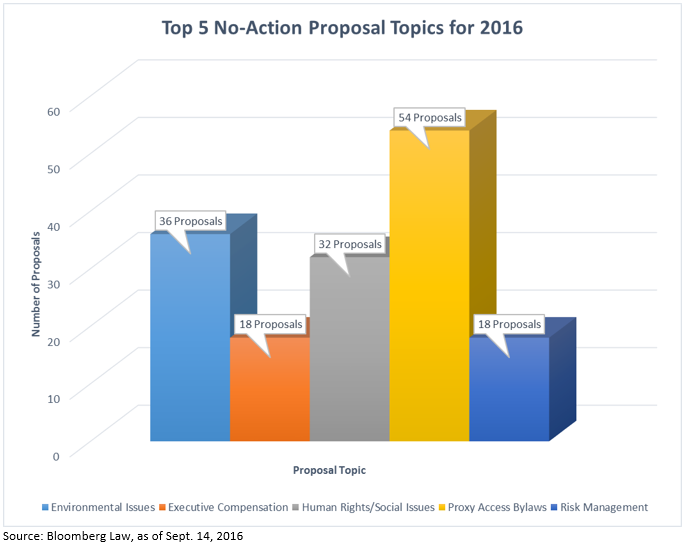 Most Popular Topics of No-Action Requests

Yesterday, several reporters asked me to comment on no-action requests and the SEC’s denial to Apple, as well as the Business Roundtable’s fanciful notions regarding the need for reform of the proxy proposal process. I am reluctant to give the Business Roundtable’s proposal, Modernizing the Shareholder Proposal Process, any more ink but will just touch on one of their issues here as I explain the Apple decision.

The SEC has consistently denied no-action requests to companies where the proponent asks for modifications to bylaws when the companies have made no modifications in the direction requested. See H&R Block and Microsoft as prior examples. Apple is no exception. This is nothing new.

Going forward, it means that companies with proxy access ‘lite’ can continue to expect proposals to bring their bylaws into closer alignment with best practices as outlined by the Council of Institutional Investors

Proxy access at Apple is largely illusionary, since those most likely to use it cannot do so with a nominee group limitation of 20. Even if shareholders successfully used proxy access at Apple, they would be only able to elect one director under the current bylaws. One director would likely have little impact, since it is unlikely they would even get a second on significant motions before the Board.

No-Action Requests: Boards are Driving the Cost of Proxy Proposals

It was a no-brainer. Yes, Staff at the SEC can grant a no-action request under Rule 14a-8(i)(10) [substantial implementation] where a company has met the proponent more than half way. But seeking such a letter when the company has not moved an iota is just a waste of corporate resources.

According to the Business Roundtable,

The current shareholder proposal process is no longer consistently serving the purpose for which it was established. It is also costing companies tens of millions of dollars and countless hours of management time through the cost of negotiating with proponents, seeking SEC no-action relief to exclude proposals from proxy statements, preparing opposition statements and other activities that are diverting from creating long-term shareholder value.

No one forced Apple to waste the time and effort on what was so obviously a fool’s errand. How could they think doing nothing would be deemed substantial implementation? My submission certainly was not a surprise. See Apple’s Proxy Access Lite Needs Changing from February. They had months to prepare and/or negotiate.

What should Apple have done with a proposal that requested three things? I have submitted proposals to Apple every year since 2010. No one from the company or their outside counsel has ever so much as contacted me to negotiate.

The proxy access proposal I submitted this year seeks the following reforms to Apple’s bylaws:

Proxy proposals are advisory. Even if they pass, the Board doesn’t have to implement them.

Reform #2: Under current provisions, even if the 20 largest public pension funds were able to aggregate their shares, they would not meet the 3% criteria at most of companies examined by the Council of Institutional Investors. Allowing an unlimited number of shareholders to aggregate shares would facilitate participation by the individuals and institutional investors most likely to use such provisions. Vanguard has never even submitted a proxy proposal. They aren’t about to go all though the trouble to nominate directors… especially when they are probably trying to get corporate customers for their retirement services.

Reform #3: Apple requires shareholder nominees to get at least 25% of the vote or be banned from the proxy for the next two years. No such limitation applies to their own directors.

These reforms are strictly suggestions. Even if the proposal passes, the Board doesn’t have to implement them. Why try to stiff the proponent with a hopelessly argued no-action request? Why would the Apple Board think doing nothing equates to substantial implementation?

There is plenty of room for compromise between a group of 20 and an unlimited group. It appears Apple would rather waste time and effort on a lame no-action request to the SEC than making a phone call to a long-time shareowner and customer. The Business Roundable cries tears over wasted corporate assets. Tell Apple and other companies to stop hitting their head against the wall. The first step when you receive a shareholder proposal should be to pick up the phone to see if there is any room for negotiation. In this case, there was/is plenty.