This could be the most important book you will read in 2017, For more than twenty years, I have been posting to corpgov.net, thinking I should write a book. The closest I got was The Individual’s Role in Driving Corporate Governance, a chapter in The Handbook of Board Governance. Now it is too late. Andrew Behar has stolen my thunder with The Shareholder Action Guide: Unleash Your Hidden Powers to Hold Corporations Accountable. Behar tells better stories and takes a more practical approach than I probably would have. He even has one of my favorite cartoons right before the Contents page. 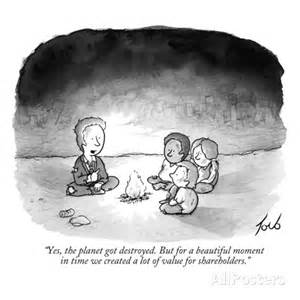 My task now is to help him get more readers, so they can join in our good work.  Buy the book at Amazon.com.

Want to make misbehaving corporations mend their ways? You can! Behar tells you how in this guide for good corporate citizenship. I teach an occasional seminar at a local university, hoping to inspire mostly retirees to use their investments as a tool to make corporations accountable. Behar covers much the same ground I do but in great detail, beginning with a few examples of bad corporate behavior and a brief explanation of corporate power.


Behar covers the basics, starting with corporate power. “Of the largest economic entities in the world, 87 are corporations.” I frequently quote from the cover of a book by Monks and Minow that helped inspire me into corporate governance, “Corporations determine far more than any other institution the air we breathe, the quality of the water we drink, even where we live. Yet they are not accountable to anyone.” (Power & Accountability

) Behar uses the same quote from Supreme Court Justice Louis Brandeis that I use in my class. “There is no such thing to my mind… as an innocent stockholder. He may be innocent in fact, but socially he cannot be held innocent. He accepts the benefit of the system. It is his business and his obligation to see that those who represent him carry out a policy which is consistent with public welfare.”

My problem is that I frequently go off on tangents. For example, despite Brandeis’ admonition, “limited liability,” which is THE key legal innovation that drove the economic growth we now enjoy, investors have only moral obligations. Since they are shielded from legal responsibility, they frequently act irresponsibly. Yes, there are legal limits to such irresponsibility. “A shareholder of a corporations is not personally liable for the acts of debts of the corporation except that he may become personally liable by reason of his own acts or conduct.” Read just how egregious such acts must be in Limited Liability: A Legal and Economic Analysis by Stephen M. Bainbridge and M. Todd Henderson. And Behar doesn’t get into how the cold war turned economics from a field of ethical study to a “science” based on ideology, like Alexander Styhre’s Corporate Governance, the Firm and Investor Capitalism: Legal-Political and Economic Views. No, he keeps readers focused on the prize, holding corporations accountable.

If you own their stock, corporations have to listen to you. Fellow shareholder advocate Andrew Behar explains how to exercise your proxy voting rights to weigh in on corporate policies—you only need a single share of stock to do it. If you own $2,000 in stock in a company, Behar tells you how to go further by filing a resolution to directly address the board of directors. Moreover, even if your investments are in a workplace-sponsored 401(k) or a mutual fund, you can work with your fund manager to purge corporations from your portfolio that do not align with your values. Illustrated with inspiring stories of individuals who have gone up against corporate Goliaths and won, this book informs, inspires, and instructs investors how to unleash their power to change the world.

What follows are just a few of my own reflections and takeaways from reading The Shareholder Action Guide.

a major shareholder or group of shareholders seeking to use its influence solely for its own economic gain by using the proxy process to change management or board members, or for a hostile takeover of a company.

In contrast, he believes the intent of shareholder advocacy

is to use the power of share ownership to improve the company’s reputation and long-term financial success by enhancing ESG practices and policies. These actions are seen as a collaboration with the company, not an intent to intimidate or to take over the company.

Throughout the book, Behar is a little more focused on the E and S in ESG (environmental, social and governance) than I have been. I’ve always seen the governance portion as more fundamental, since if you get the right governance the other two might fall into place with much less effort on a day-to-day basis. 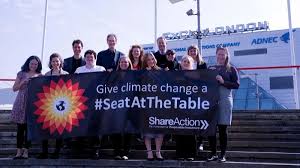 After reading the Guide, I see I’ve been falling down on the job, having concluded long ago that presentation of the proposal at the annual general meeting (AGM) is a mere formality because almost all votes are cast by proxy before the meeting. I’ll need to give more thought to presentation as an opportunity after reading how Dr. Stan Glantz gave such an impassioned speech at Walt Disney’s AGM about tobacco that Disney’s CEO/Chair Bob Iger announced right then that Disney would remove all smoking from any future films rated G, PG or PG-13.

Of course, in that example, there had been years of pressure on Hollywood studios before the meeting and Iger had probably anticipated the question, even though not associated with a shareholder proposal. I cannot see myself giving such a dynamic speech that a board will reverse its recommendation on a proxy proposal but winning a majority vote is often a multi-year effort. Better speeches could help build the foundation needed for adoption.

Every time I disclose how I am voting my proxy, in hopes that others will follow suit, I include the following warning: “Be sure to vote each item on the proxy. Any items left blank are voted in favor of management’s recommendations.” I feel so strongly about the issue that I petitioned the SEC for a rulemaking in 2009. See also comments on U.S. Proxy Voting System.

I was delighted to see Behar include the following:

[I]f you do not vote as all, then your votes are automatically voted by management. If you are unsure about an issue, it is best to abstain as these votes are not cast either for or against a resolution and are not counted in the final tally.

It is Good to see Behar include a discussion of using an “exempt solicitation” to get the word out on proxy proposal. This is an inexpensive way to communicate with the press and all shareholders subscribing to SEC filings on specific companies. As I have explained previously,  “Edgarizing services, there’s a new market for you. Lower your price a bit and start helping individual shareowner proponents to file.” I would love to see As You Sow or some other shareholder advocate work with software developers to create a simple tool for filing PX14A6G forms aimed at shareholders. Find more on exempt proxy solicitations at The Activist Investor.

Many people do not think of themselves as shareholders but about 1/2 of Americans have 401(k)/403(b)/457 or other plans. If we can get these funds better aligned with our values, the future will be one we help to build. Behar advises readers to talk to their work colleagues if you are not offered fund options that share your values.

Then talk to your plan administrator or someone else with the authority to add or change funds. Linkedin is a good resource to find out more about that person before you meet. From their personal Linkedin page maybe you will find some indication they share your values, such as for sustainability. Bring a solution to the table, like suggested SRI funds, and be prepared to deal with the presumption that SRI funds earn less. The Sustainable & Responsible Mutual Fund Chart from The Forum for Sustainable and Responsible Investment can help make your case, as can research cited by USSIF.

My plan at least offers SRI options. However, I tried to get my plan administrator to link to proxy voting policies and votes for each fund offered. See Savings Plus: Transparent Proxy Voting Needed. So far, I have been unsuccessful but Behar has given me some ideas. I hope I will get around to renewing my efforts. Our plan holds $10 billion, so if participants can get better proxy voting it could make a difference.

I have one minor gripe about The Shareholder Action Guide. The “resource” pages on “Links” provide only seven links… and my site is not one of them. 😉 I hope this portion future editions will be more extensive.

If you are interested in finding more today, see my Links+ page and my Shareowner Action Handbook. Both are woefully out-of-date but they do offer many more resources.

I welcome your help on finding broken links and adding links relevant to corporate governance and shareholder advocacy. Please email me with your suggestions.

Buy the book and get busy. We need to attack the problem of corporate accountability from every angle. Our rights to demand accountability as shareholders may be stronger than our rights as citizens, especially with corporations making secret political donations under Citizens United as well as playing states and countries off against each other for special privileges.