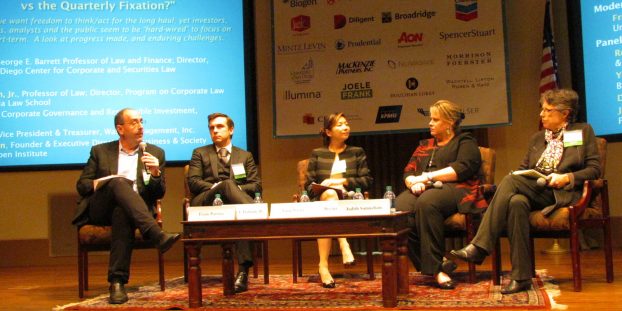 Can We Really Govern for the Long-Term vs the Quarterly Fixation? This is Part 3 of my coverage of Directors Forum 2017 in San Diego, which was billed as Directors, Management, & Shareholders in Dialogue. I was also hoping to learn more about President Donald J. Trump and how his administration might impact corporate governance. See Part I and Part 2. As usual, the Directors Forum was under Chatham House Rule, so I’m mostly just posting a few observations that were interesting to me.  Photos from the professional photographer at Directors Forum 2017 Photo Slide Show. 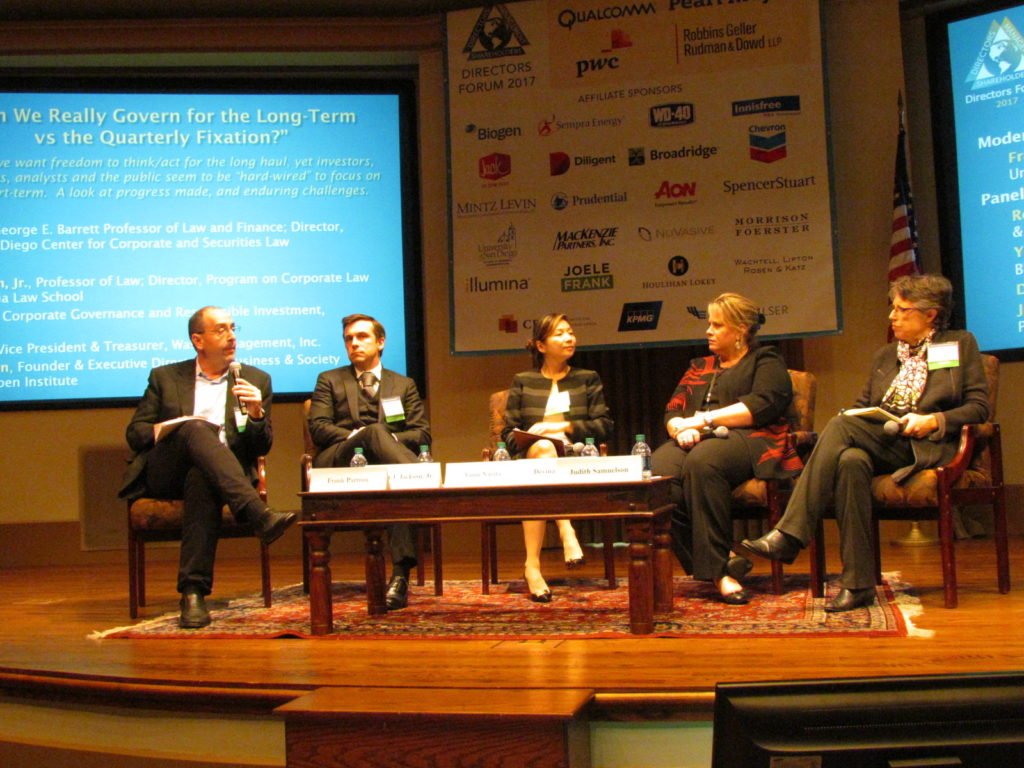 Can We Really Govern for the Long-Term vs the Quarterly Fixation?

Can We Really Govern for the Long-Term vs the Quarterly Fixation? 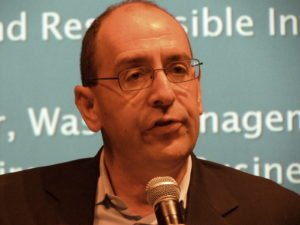 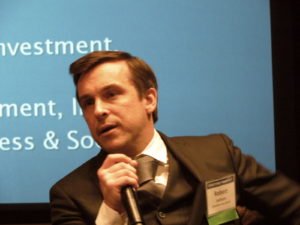 Don’t waste our current political crisis. Business is the most important institution. We can’t solve our biggest problems without business. Public trust in business is low but it is even lower for government. Business is the wealth creator. Shareholders used to get 15-20% of profits, now it is more like 75%. Long-term is a proxy for business to be able to act as meaningful player. 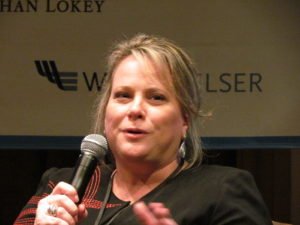 Larry Fink’s letter to shareholders emphasized ESG risks. Clients are always asking questions about short-term and proxy votes. How much transparency is enough? Competitive advantage could be circumscribed. Goals must be specific and measurable. Goals and dialog that can be measured is a plus.

Long-term/short-term is generally associated with whatever you agree with or don’t. If you agree, it’s long-term; if not, short. Independent directors have a limited investment in the company. There will always be tension between goals. Set the right short-term goal.

Educate, don’t promise. But the economy is made up of promises. 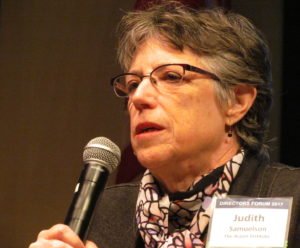 A key shareholder today is the CEO because they are so tied to share price. That results in pumping the stock price today and less building for tomorrow. Shorter and shorter tenure for CEOs. Makes engaging in dialog more important. Expectations for executive tenure are also crucially important.

Role of activism and their time horizons – little consistent evidence re enhancing or decreasing value. What value can activist bring? It is different in every case. Many activists try to get the company to focus on long-term directions. Activists are only as powerful as long-term shareholders allow them to be. However, there are so many settlements between boards and activists that it skews to short-term.

Reward long-term holding, financial transaction tax, valuing R&D. Pay to reward the pay we want. Board’s job is to figure out how to share the pie.

Investors also need to have courage beyond quarterly period. CEOs should persuade investors what timeframe they should use to hold them accountable.

Democratization of capital – Millions are watching their investments and trading frequently. When Value Act gets a 5% foothold, the stock price goes up 7%. Engagement is critically important at indexed funds.