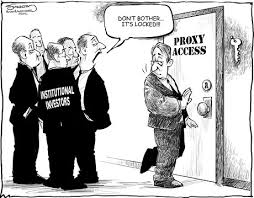 Whole Foods Proxy Access, we have another chance to vote to make proxy access real before the annual meeting on February 17.

Whole Foods Market, Inc. (NASD:WFM) is a retailer of natural and organic foods and is one of the stocks in my portfolio. ProxyDemocracy.org had collected the votes of four funds when I checked and voted.

I voted FOR Whole Foods Proxy Access and the report on Food Waste; AGAINST director Jonathan Sokoloff because of his poor attendance record. I voted with the Board’s recommendations 82% of the time. View Proxy Statement via iiWisdom.

From the Yahoo Finance profile: Whole Foods Market, Inc.’s ISS Governance QualityScore as of February 2, 2017 is 3.  The pillar scores are Audit: 1; Board: 10; Shareholder Rights: 1; Compensation: 9. Brought to us by Institutional Shareholder Services (ISS). Scores range from “1” (low governance risk) to “10” (higher governance risk). Each of the pillar scores for Audit, Board, Shareholder Rights and Compensation, are based on specific company disclosures. That gives us a quick idea of where to focus: Compensation and Board.

Whole Foods Market’s Summary Compensation Table shows the highest paid named executive officer (NEO) was Jason Buechel –Executive Vice President and Chief Information Officer at $1.3. I’m using Yahoo! Finance to determine market cap ($9.7B) and I am roughly defining large-cap as $10B, mid-cap as $2-10B, and small-cap as less than $2B. Whole Foods is a mid-cap company. According to the Equilar Top 25 Executive Compensation Survey 2015, the median CEO compensation at mid-cap corporations was $8.4M in 2014, so pay was well under that amount.  Whole Foods Market dramatically underperformed the NASDAQ over the most recent one, two, five and ten year time periods.

Taking into account both the quantitative and qualitative measures (outlined above), we believe that shareholders should support the current compensation policies put in place by the Company’s directors. Furthermore, we believe that the Company’s compensation policies and procedures are centered on a competitive pay-for-performance culture, strongly aligned with the long-term interest of its shareholders and necessary to attract and retain experienced, highly qualified executives critical to the Company’s long-term success and the enhancement of shareholder value. Therefore, we recommend a vote “FOR” this Proposal.

I voted “FOR” the say-on-pay item and voted in favor of a one-year frequency.

I have no reason to believe the auditor has rendered an inaccurate opinion, is engaged in poor accounting practices, or has a conflict of interest — so voted “AGAINST.”

As mentioned above, I voted “FOR” the pay package and in favor of one year say-on-pay frequency. Per the recommendation of Egan Jones, I voted against Jonathan Sokoloff, who attended less than 75% of all the meetings of the Board and of the committees during the fiscal year that has ended.

#5 Whole Foods Proxy Access –  The proposal is mine, so you can be sure I voted ‘FOR.’ While the proposal seeks a number of amendments to reach ‘best practices’ standards, the most important involves raising the group limit for making nominations from 20 to something substantially higher. Under current provisions, even if the 20 largest public pension funds were able to aggregate their shares, they would not meet the 3% criteria at most of the companies examined by the Council of Institutional Investors, whose members have over $3T in assets. Saying that Whole Foods has proxy access is a little like saying Exxon is green because they recycle their office paper.

Other than new director Mary Ellen Coe, the average tenure of directors at Whole Foods is 15 years. Can directors that have served so long really be considered independent? More importantly, if this long-serving board has failed to beat the NASDAQ over the most recent over the most recent one, two, five and ten year time periods, what are the chances Whole Foods will outperform during the next ten years? It is time to open the board to competition.

#6 Food Waste. From the proxy:

While WFM provides anecdotal evidence of its food waste reduction efforts in select stores, it has yet to report on its food waste management strategy or disclose current, company-wide data on food waste prevention or diversion. Several states have laws that commonly require retailers to divert food waste from landfills, creating regulatory risk for those who lack adequate diversion strategies. Food waste related legislation has also been introduced in the U.S. Congress and the EPA announced a national target to reduce food waste 50 percent by 2030.

Whole Foods should be on top of this issue and should be a leader in food waste reduction. Writing the requested report would be an inexpensive first step in the process.

As mentioned above, ProxyDemocracy.org had collected the votes of funds when I voted.  Proxy Insight reported additional votes from CalSTRS, Canada Pension (CPPIB), Teacher Retirement System of Texas, Unitarians and others. All voted FOR Whole Foods proxy access. Most also voted AGAINST Sokoloff and FOR food waste.

Pursuant to SEC Rule 14a-8, any proposal that a shareholder of the Company wishes to have considered in connection with the 2018 Annual Meeting of Shareholders must be submitted to the Corporate Secretary at our principal executive offices no later than September 6, 2017, and in accordance with related provisions of the Company’s current Bylaws.