McDonald’s shareholders will vote on a proposal to give franchisees a seat on its corporate board of directors at their annual meeting in May. See ‘McD’s must let investors vote on proposal to give franchisees a board seat.’ (Crain’s) Could similar, more inclusive, proposals use preferred shares to create new forms of stakeholder democracy? A report at Twitter could assess viable options. (#WeAreTwitter Record Date Approaches)

Under the proposal, McDonald’s would have to issue franchisees a special class of stock with the right to elect one director, but carrying no economic interest in the company. Each franchisee would get one share of stock with one vote for each restaurant the franchisee owns. 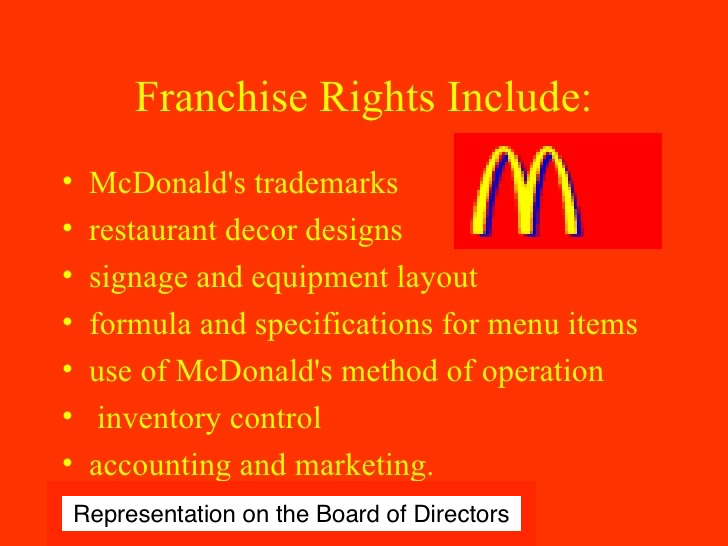 Maureen O’Brien, head of corporate governance at Segal Marco, the proponent, says the vast majority of McDonald’s business is conducted through franchised restaurants, buy “none of the board members have any previous franchising experience.” As McDonald’s moves into more variable menus, mobile ordering and touch-screen kiosks, a franchisee’s perspective should be a plus.

Every year there are a few proposals that stand out as possible game-changers – majority-voting requirements, disclosure of lobbying and political expenditures, proxy access, and climate change proposals are having real impacts. I do not know what the chances are for franchisees to win a seat at McDonald’s or how it would work if enacted but it certainly seems worthy of discussion about the exclusivity of shareholders electing directors.

As far as I know, there has never been a proposal quite like this one. Therefore, it may take a few years to gain traction. Most funds vote with management or abstain if a new type of proposal has not yet been addressed in their proxy voting policy and few funds will have considered the possibility of franchisee directors. If the proposal does get traction, expect variants to move well beyond franchisees to employees, customers, producers and more.

I never gave stakeholder theories much credence, largely because of a lack of accountability mechanisms. Shareholders have a vote. Stakeholders do not. When founding families controlled companies, we knew whose interest they served and we knew who to go after if there were problems, such as not acting in the public interest.

Managers dominated once ownership became separated. Managers still have the appearance of dominating but real control often lies with the money managers… when they choose to exercise it. Large funds like Vanguard, BlackRock, State Street and Fidelity hold the balance of power. They decide where capital is allocated but, except during the initial public offering, shareholders largely extract value. Real value is created by key employees, which in the case of McDonald’s arguably includes franchisees.

Perhaps it is time to rethink the board. As Tocqueville pointed in Democracy in America, democracy is the form of government that best knits together fragmented societies. Our corporations and our societies have become fragmented to the point of nonrecognition. One of the common threads between Brexit and the Tump victory is the desire for more local autonomy, more control by those impacted. I doubt either Brexit or Trump will lead to the desired result. However, giving greater voice to franchisees at McDonald’s seems more promising.

In, Ownership and Control: Rethinking Corporate Governance for the Twenty-First Century, Margaret Blair proposed not total shareholder returns but “maximizing total wealth creation by the firm.” The key to wealth maximization she believes is to be found in providing ownership-like incentives to “those who control critical, specialized inputs and to align the interests of these critical stakeholders with the interests of outside, passive shareholders.” Blair argues the importance of “human-capital,” and particularly firm specific human capital, is growing in importance in relation to financial capital.

Of course, the question becomes who are the critical stakeholders? At many companies this will be difficult to assess. However, it is hard to argue franchisees do not hold such a position at McDonalds.

Marjorie Kelly’s The Divine Right of Capital also aimed to start a dialogue about the “core problem of capitalism.” Bloated CEO pay, sweatshops, stagnant wages, corporate welfare, environmental indifference and, I would add, the unraveling of political democracy, are all symptoms. “They spring from a single source: the mandate to maximize returns to shareholders.” Kelly argues “this mandate amounts to property bias, which is akin to racial or gender bias. It arises from the unconscious belief that property owners, or wealth holders, matter more than others.” We have yielded control to an economic aristocracy.

Civilization has crossed a great divide in history, from monarchy to democracy. But we have democratized only government, not economics. Property bias keeps our corporate worldview rooted in the predemocratic age.

Corporations used to be chartered for social purposes, as well as to bring a profit to investors. Today they seem out of control. A more accurate description of “investors,” according to Kelly, would be “extractors.” Most investors contribute nothing to the company. Instead, they are buying the right to extract wealth from it. Looking at the other stakeholders, such as suppliers and the community, one group stands out…employees. Employees and investors and present an interesting comparison.

Employees typically invest a great deal in the companies they work for in terms of what Margaret Blair calls “firm specific human capital.” They develop knowledge and skills, much of which is specific to their individual firm’s operations. In addition, employees often have 401(k) or other investment plans that are overweighted in their employer’s stock. In contrast, most shareholders have a relatively small proportion of their investments in any one company because they recognize the reduced risk of a balanced portfolio.

Even though employees have a greater stake in the corporation’s success, they have no formal say as employees in corporate governance… no vote for the board of directors. Kelly argues employees are not treated as corporate citizens, in the current model, but as subjects. In today’s paradigm, you either own property or you essentially are property.

Like Blair, Kelly argues that efficiency is best served when gains go to those who create the wealth. Again, McDonald’s franchisees fit the model.

The no-action denial at the SEC allowing the proposal to move forward is huge and will lead to other proposals for employees and even customers electing board members. Blockchain technology facilitates such creative efforts. (see also Blockchain Technology in Online Voting)

I see from the proposal itself, the preferred shares issued to franchises would only give them the right to vote on the one director, not other issues on the proxy.

If it happens, it will be interesting to see what the nominating process is. Will there be a separate nominating committee? How will that be chosen?

At most companies, customers won’t feel enough affinity with a company to vote but imagine the additional bond created at Twitter or elsewhere if users became shareholders with a representative on the board? See #WeAreTwitter Record Date Approaches. Thousands have already become part of the #WeAreTwitter, #BuyTwitter, #platformcoop campaign to ensure Twitter remains and advances as “the people’s news network.”