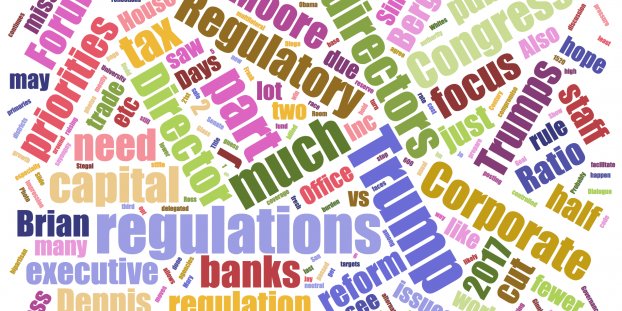 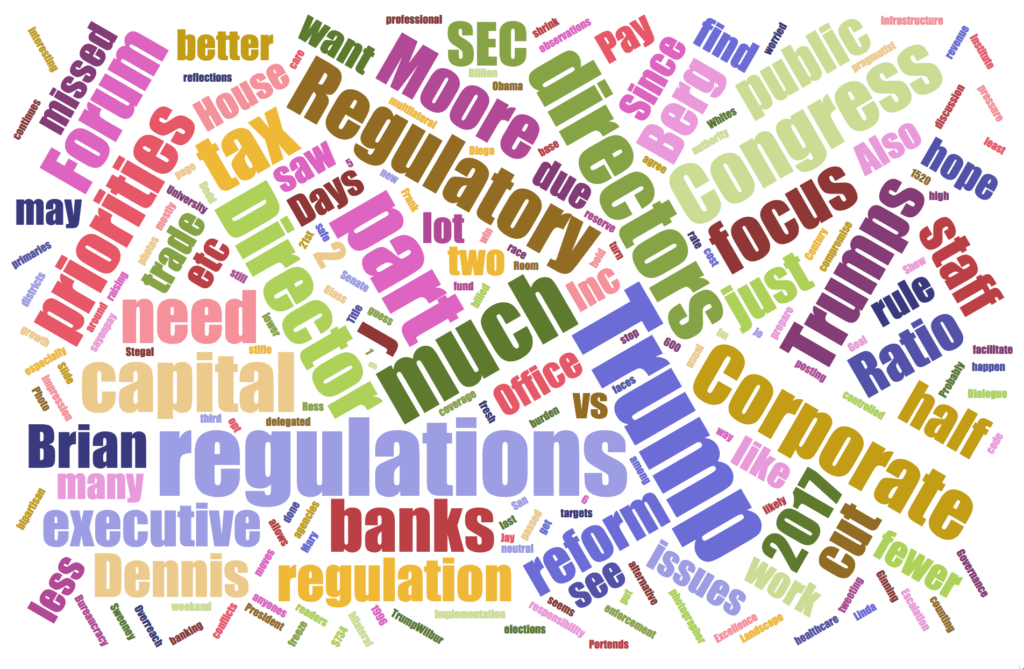 Directors Forum 2017 met in San Diego just 2 days into the Trump Administration. It was anyone’s guess what would happen to Dodd Frank, regulations, tax code, healthcare, etc. We heard from political affairs experts. Closing in on three months later, you be the judge. They had good insights but there is much to come. This is Part 6 and the last of my coverage of @corpdirforum, which was billed as Directors, Management, & Shareholders in Dialogue. I hope to see you at the next Forum in 2018.

See Part I, Part 2, Part 3, Part 4, and Part 5. As usual, the Directors Forum was under Chatham House Rule, so I am mostly just posting a few observations and my reflections that I hope readers will find interesting. Much better photos from the professional photographer at Directors Forum 2017 Photo Slide Show. Thanks to 2017 sponsors for making it possible.

Two Days In: The Political Landscape in 2017, and What it Portends for Business

Many of the priorities in Congress match up with Trump’s issues. Trump promised to repeal Dodd-Frank. Treasury Nominee Steve Mnuchin at hearing focused on lessening regulatory burden on community banks. Too much authority is delegated to regulatory agencies. Republicans passed Dodd-Frank alternative. It allows banks to opt out if they hold more capital in reserve. Pay ratio, say-on-pay etc are targets for repeal from Title 9. What will get through the Senate? Probably Trump and Congress’ lower priority than tax reform or other issues. Room for compromise, especially with regard to community banks. Pay ratio repeal seems likely, at least that was my impression, but companies still need to prepare for implementation. 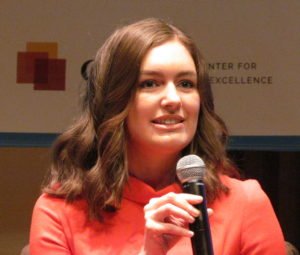 There are lot of fresh faces among Republicans in Congress. Only a third were there last time they controlled office of the President and Congress. 21st Century Glass Stegal in discussion.

Since 1996, the number of public companies has been cut in half. Priority to turn that around.

Trump will be under pressure from Congress to stop tweeting, because it moves markets.

Corporate tax reform. Goal 15-20% tax rate. How can that be done in a way that is revenue neutral?

Trump/Wilbur Ross want bilateral trade agreements not multilateral agreements. Republicans are not on that page.

Ginning up the base and conflicts win the race for fund raising. Many are worried more about primaries in safe districts than elections.

Bureaucracy vs Business: What to DO about Regulation Escalation and Overreach 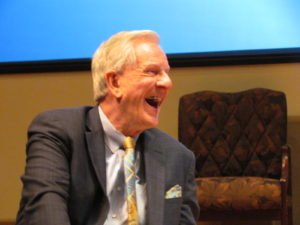 With 600 new rules at a cost of $734 Billion and counting; directors, management & shareholders agree that too much regulation can stifle growth, and the number of public companies continues to shrink. What can we DO about it? 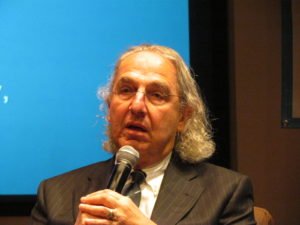 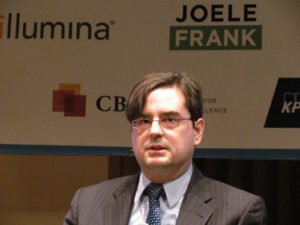 The courts are not bureaucratic. Independence has been interpreted differently over years, even though definition has not changed. Politicization of regulatory bodies and need to look at how staff are renewed. Staff does not view success as finding nothing wrong. They frequently have a prosecutorial mindset.

There are fewer public companies largely due to increased M&A activity. (Much due to declassified boards and reduced defenses.) In addition, there has been a dramatic increase in private equity markets (fivefold increase). Ratio of total stockmarket to GDP has not declined much.

More concerned with efficient regulation. Regulations take on a life of their own. One out of $4 spent by community banks is spent on compliance. We will be rolling back labor, environmental, and health regsulations. Regulatory costs are much less in Mexico or China. SEC investor protection vs capital formation. Strength of market is faith in US regulated market… stabilized through Dodd-Frank. If we want to maintain faith in our markets, we need to keep the regulations that protect investors. 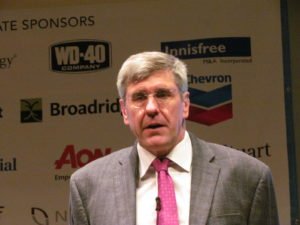 Trump’s election was a political black swan event and Moore early on saw that Trump tapped into something he saw in the American people that others missed.

People felt betrayed by both Democrats and Republicans. Trump’s rallies took on the feel of a Rolling Stones concert. There was a vast divide between rural and cities.

Bumper Snicker – Vote for Donald Trump: Nobody Has to Know.

With regard to the more substantive parts of Mr. Moore’s presentation, it is difficult to report on, given the Chatham House rule. I will just say that some of it was informative and some appeared to be misinformation. I did feel like I left with a better understanding of where the Trump Administration may be going and was actually slightly less apprehensive going out of the conference than going in.

I like Trump’s concern for jobs and good paying jobs. His potential trade policies may work against those priorities. I find many of his other priorities problematic. Although I see his administration giving the economy a boost, I wonder if it will be a sustainable boost or a relatively quick flame out.

During one of the question and answer sessions, I offered up the following comment regarding Trump’s call for deleting two existing rules for every one added. I headed legislation and regulations for the largest department in Cal/EPA when Pete Wilson became governor and signed executive orders to dramatically cut regulations. I explained to the Governor’s staff that in our field, the laws were very strict. Regulations essentially provided loopholes for businesses. If they followed specific rules, their process would be exempt from the law.

I hope the Trump administration will take a more thoughtful approach.