Below is the proposal Twitter shareholders will vote on. Of course, we would love the proposal to get a majority vote so that a study can begin right away but it needs we need at least 3% of the vote in order for a similar proposal to be reintroduced next year. Twitter is an $11 billion company. There are more than 700 million outstanding shares and we are dealing with a new idea. We are not likely to win right away, so are looking for your feedback.

As Twitter users and stockholders, we see how vital the platform is for global media. We are among millions of users that value Twitter as a platform for democratic voice. And in 2016, we’ve seen Twitter’s future in the balance, from challenges of hate speech and abuse to the prospect of a buyout.

That is why we want the company to consider more fully aligning its future with those whose participation make it so valuable: its users. As of today, 3,300 individuals signed a petition at http://wearetwitter.global urging Twitter to build democratic user ownership.

For successful enterprises like the Green Bay Packers, REI, and the Associated Press, their popularity, resilience, and profitability is a result of their ownership structure. Examples of online companies include successful startups like Managed by Q, which allocates equity to office cleaners, and Stocksy United, a stock-photo platform owned by its photographers.

We believe these models point the way forward for Twitter, Inc., overcoming challenges to thrive as a cooperative platform.

A community-owned Twitter could result in new and reliable revenue streams, since we, as users, could buy in as co-owners, with a stake in the platform’s success. Without the short-term pressure of the stock markets, we can realize Twitter’s potential value, which the current business model has struggled to do for many years. We could set more transparent, accountable rules for handling abuse. We could re-open the platform’s data to spur innovation. Overall, we’d all be invested in Twitter’s success and sustainability. Such a conversion could also ensure a fairer return for the company’s existing investors than other options. Therefore,

RESOLVED: Stockholders request that Twitter, Inc. engage consultants with significant experience in corporate governance, preferably including conversion of companies to cooperatives or employee ownership, to prepare a report on the nature and feasibility of selling the platform to its users via a cooperative or similar structure with broad-based ownership and accountability mechanisms. The requested report shall be available to stockholders and investors by October 1, 2017, prepared at reasonable cost and omitting proprietary information.

* Twitter will set the actual proposal number when they print the proxy. 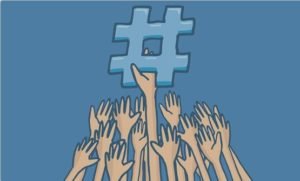 You have probably signed the Petition. Now it is time to buy shares in Twitter before the expected record date of March 30th. Only shareholders as of the record date can vote on the #WeAreTwitter proposal to report on corporate governance options that will give Twitter user’s a more powerful voice. Attend the meeting in late May. Send us your ideas or use the comment section below.

I plan to post many articles on the #WeAreTwitter campaign beginning next week. The post next week is on how a group at McDonald’s hopes to give franchisees a board seat using preferred shares. Preferred shares could be one mechanism to accomplish our goals at Twitter. Let’s explore the options available to give Twitter users a greater voice in governing Twitter, Inc.  I welcome guest posts on the topic. Send your articles to jm at corpgov.net.