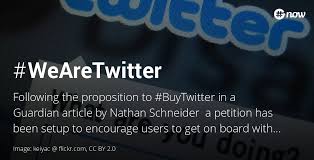 Twitter has been an important tool to promote democracy – think #ArabSpring, #BackLivesMatter,

#OccupyWallStreet, #WomenOnBoards, etc. Now, through #BuyTwitter @ BuyThisPlatform, Twitter is being called on to explore its own form of corporate governance – how the company itself can be more democratic and inclusive. The results could have implications for the future of capitalism.

Take Action: On May 22 shareholders (owning as of March 30) will decide if Twitter should study and report on the feasibility of “selling the platform to its users via a cooperative or similar structure with broad-based ownership and accountability mechanisms.” Voting by proxy on the proposal has already begun. As one of the authors, I hope you will consider voting “For” our Proposal #4.

As far as I know, the idea began with Nathan Schneider’s Here’s my plan to save Twitter: let’s buy it, moved to a signature gathering petition and then to the proposal now being voted, prompted by Danny Spitzberg. See a list of posts about #WeAreTwitter #BuyTwitter at The Internet of Ownership maintained by Schneider. Feel free to add more in the Comments field below.

As Schneider’s article noted, “Twitter is in trouble. The user-base is growing, but not quickly enough. Ad revenue is growing too, but not as quickly as it once did.” Share price has fallen from $69 in 2013 to $14 in 2017. There has been considerable speculation as to who might buy Twitter.

From the standpoint of users and employees, many are concerned, especially if the company is sold, that Twitter will move from away from its core values such as global political engagement and transparency, social good, defending users, free speech and online safety. The fear is that Twitter or its new owner will instead focus on ad revenue and short-term profit. Such fears are not only growing around Twitter but are quickly spreading, especially in Silicon Valley and especially at companies primarily built on the Internet. It is ironic that employees at such companies tend to be strong supporters of democracy and seek out jobs with a social purpose, but the governance of such companies is increasingly oligarchic or dictatorial.

Many blame short-termism on shareholder activists. One response has been the adoption of multi-class stock by some high-profile high-tech companies, such as in Snap’s recent IPO. Another response has been a movement by several large institutional investors for more independent and diverse boards who will engage more directly with investors, focusing on long-term value creation rather than short-term results. For example, T. Rowe Price announced it will vote against directors at companies with dual-class shares, as will some other members of the Council of Institutional Investors.

Last year, the Wall Street Journal reported that 14% of the companies that held initial public offerings in the first eight months of 2015 in the US had dual-class share structures. This compares to just 1% in 2005. Such structures reduce shareholder accountability.

Why is Democracy-Free Corporate Governance Expanding?

Companies, especially those built around the Internet, no longer need to go to the public through an initial public offering (IPO) to scale up, so they do not need to offer stocks that come with normal shareholder rights. Additionally, shares are increasingly held by index and modified index funds. Index funds own the entire market or market segment. By definition, they cannot sell, even if they have no voting rights, as long as companies remain in targeted indexes.

Many companies are built around the Internet. They can scale up with only a small bit of capital and a small number of employees because they are using an existing infrastructure invented and paid for by others, not building a factory or hiring thousands employees to produce products or services. Software, algorithms and easily gathered input generated by customers are doing the work, instead of thousands of company employees.

IPOs are only ‘needed’ when founders and their partners want to cash out a substantial portion of their investments. Investors buy the stock because the IPO is delayed until company financials look their best and investors do not want to miss out on the “next big thing.” Even if they have no rights, investors think they can cash out before the dictator fails.

I often attend meetings of the Silicon Valley Directors’ Exchange. Events often involve frank discussions among directors at high-tech companies. I vividly recall an exchange a few years ago when several directors boasted that they would not serve on a board that has to deal with real shareholders (instead of class B or C shareholders with no voting rights).  Their logic was that shareholders do not really know anything about the business, especially setting pay, so having shareholders ‘interfere’ is nothing but a distraction.

Are directors at controlled companies anything more than lap dogs? If the founder or other class A shareholders control the vote, they control the directors. In such a situation, no director can really be independent because if they disagree with the emperor or the oligarchy, they can be fired. Democratic-free companies can start out with a bang, but dictatorships do not fare well over the long term.

While the findings are directional conclusions and there are exceptions, the results challenge claims by advocates of controlled firms that such structures ultimately benefit all shareholders by insulating management from market pressures. Some controlled companies do function as benevolent dictatorships, but for other controlled companies, the adage about the corrupting qualities of absolute power rings true. In these cases, self-dealing, poor strategic planning and ossified boards result in underperforming companies.

But the real issue is that when such behavior does occur, external shareowners have little recourse, particularly at controlled companies that feature multi-class governance.

Most dictators start with high ideals, enabling them to attract and inspire creative employees and eager customers/users. However, concentrated power tends to corrupt. That is why countries have independent branches of government (executive, legislative, judiciary) and companies have independent boards. However, these mechanisms not only safeguard our rights, freedoms and assets, they also foster diversity, collaboration, innovation and a higher sense of purpose. BuyThisPlatform could lead to generating more wealth for all involved in the Twittersphere.

BuyThisPlatform: Status as an Impediment to Generating Wealth

Human involvement at the work place in all facets of the work is a prerequisite for the enhancement of quality life as well as performance and satisfaction…. The organizational policy, therefore, should work towards enhancing such aspects of work which encourage people’s ownership of the work place as well as the work itself, collaborative efforts among coworkers, and decision-making processes based on participate models. (Suresh Srivastva and others, Job Satisfaction and Productivity, Kent, Ohio: Kent State University Press, 1977, p. xix)

Other scholars have long reached the same conclusion:

It is paradoxical that the standard justification for autocratic practice in industry is its alleged efficiency, since the empirical research results do not support that conclusion. In fact, increased rank-and-file responsibility, increased participation in decision-making and increased individual autonomy are associated with greater personal involvement and productive results. (Daniel Katz and Robert L. Khan, The Social Psychology of Organizations, New York: John Wiley and Sons, 1966, p. 463)

Even department store clerks are crucial to profits. Sears, for example, recently found that if employee attitudes improve by 5%, customer satisfaction will jump 1.3%, resulting in a 1/2% rise in revenue. (Wall Street Journal, 7/22/98, page B1.)

Why, against the findings of so many studies, do organizations continue to allow workers so little control over their jobs? Most decision-making structures are designed around status needs related to dominance and control over others. They are not designed to maximize innovation or the creation of wealth. In order to gain higher status, individuals seek to dominate more and more people, leading to a widespread dynamic over time which shapes the organization so as to move the locus of control upward.

In order to generate more innovation and wealth, we need to take advantage of all the brains in our organizations and all the brains of users. We can do so by pushing decision making down and out to the lowest and furthest practical level. Listed below are a few “universal elements” to enhance workplace democracy, some of which might be adapted to BuyThisPlatform.

BuyThisPlatform could provide an example in democracy to other companies. Corporations that embrace democracy through corporate governance that include employees and customers should be better equipped to create wealth, compete in global markets, and solve the highly complex problems of the 21st century. 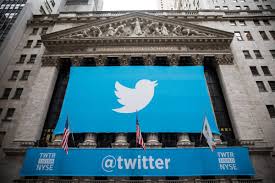 The BuyThisPlatform proposal at Twitter is open-ended. It requests a study and report to shareholders after exploring alternative forms of corporate governance. The proposal mentions nonprofits and co-ops such as the Green Bay Packers, REI, the Associated Press, Managed by Q, and Stocksys United. Many other organizations could also be included in the study, including more theoretical examples.

McDonald’s will have a proposal voted at their annual meeting this year to provide franchisees a seat on the board using preferred shares that can only vote on the one seat. Among other options, a similar idea at Twitter could be to issue preferred shares to employees and power users paying a membership fee, allowing them to nominate and vote board candidates for specified additional seats.

Nathan Schneider, one of the originators of BuyThisPlatform, has explored the topic of more cooperative business forms both in theory and practice along with his partner Jason Wiener. See their quick slide deck, Co-op Capital: How democratic tech can improve your deal-flow. Schneider’s post, Users should be able to own the businesses they love instead of investors, would provide Twitter with a good start on a future report to shareholders, should the measure pass.

Of course, the Board can commission such a study on their own. They do not need a proposal from shareholders, but a substantial vote For Proposal #4 could help push them to consider options with a central focus on users and employees, rather than just selling out for the short-term profit of shareholders. With the right structure, BuyThisPlatform could be a win/win for shareholders, employees, users and democracy. Twitter could set an example for the future of capitalism. Comments welcome but may take a day or two to post after being moderated.