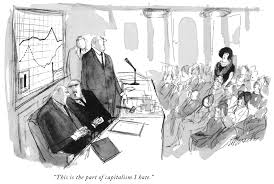 Financial CHOICE Act Does Away with Shareholder Proposals

Below is a copy of a very thoughtful letter from Sanford Lewis, an amazing attorney who represents SRI and pension funds, as well as individual investors including John Chevedden. Two points they made that I failed to mention in my post:

The bill is being heard in Committee today and will be marked up in early May. It is still important to get in letters and email as I mentioned in my post, Financial CHOICE Act: Take Action. Below is the letter from Sanford Lewis with slight formatting changes.

Re: April 26 Hearing on Discussion Draft of the Financial CHOICE Act of 2017 – Section 844 – Shareholder Proposals

I am writing regarding Section 844 of the discussion draft of the Financial Choice Act under consideration for the Financial Services Committee hearing of April 26, 2017.
I am a lawyer who represents investors who file proposals under the Securities and Exchange Commission (SEC) shareholder proposal rule, Rule 14a-8. My clients include pension funds, investment firms and individual investors but opinions stated here are my own.

Important Background: Rule 14a-8 was Created to Protect Rights of Individual Investors

The apparent impetus for these amendments to the shareholder proposal rule come from critics who assert that that “individual investors” are abusing the rule, which the critics believe should instead be reserved for larger, longer-term investors. It is important, therefore, at the outset of discussion of this provision to recognize that the SEC’s shareholder proposal rule arose to ensure the ability of individual investors to engage in oversight and deliberation on important issues of corporate risk and governance.

Today we take for granted the rituals of the corporate annual meeting, including the proxy statement on which shareholders vote on an array of issues. In contrast, in the early 20th Century it was unclear whether a shareholder had to appear at a corporate meeting to vote in person or whether they could appoint an agent — a “proxy” — to vote on their behalf.

State law was eventually clarified, so that investors could appoint a proxy to vote on their behalf at the meeting. This led to corporations established the corporate proxy statement, including allowing investors to authorize management to vote on their behalf. Such authorizations have sometimes been abused, as shareholders have found themselves unwittingly approving self-dealing by management, exorbitant executive compensation and other decisions authorized against shareholders’ interests. Fortunately, a body of rules has evolved to provide balance by empowering investors to also engage in the governance process. Corporate governance pioneers John and Lewis Gilbert were individual investors who, beginning in the 1930s, put forth proposals to protect investors and improve transparency ranging from demanding proper auditing, post-meeting reports to shareholders, and convenient locations for shareholder meetings to increased director accountability and limits on executive compensation.

However, these pioneers faced a practical problem. Under state law a shareholder can submit a proposal on the floor of a meeting, however, given the heightened role of proxy voting, a proposal would be unlikely to receive sufficient votes if voting were limited to those in attendance.

The Gilberts fought for and won an SEC rule requiring clear notice by companies to all security holders regarding proposals that shareholders intend to bring up at the meeting. The resulting shareholder proposal rule became a bedrock element of corporate democracy. (The SEC proxy rule was put to its first legal test in the courts in a proposal brought by John Gilbert at expectations of shareholders by elevating holding amounts and time periods from the current $2000 for one year to requiring 1% of shares held for three years.)  The federal rule, by providing for prepublication of shareholder proposals to all investors, created a real and practical opportunity for an individual investor to offer and win support for his or her proposals.

A complex web of client relationships, contractual, institutional and fiduciary arrangements, disclosure obligations, negotiation rituals and investor expectations has been constructed around the rule. Many investors undertake cooperative dialogue and engagement with companies, and win important company reforms, built on the shareholder proposal process. Many clients choose investment advisors based in part on the advisor’s commitment to an active investment and engagement strategy, which includes the filing of proposals on an individual shareholder’s behalf.

With this background in mind, I will turn to proposed Section 844 of the Financial Choice Act.

As demonstrated above, the shareholder proposal rule was established by the SEC to make it possible for individual investors to participate in corporate governance matters that impact all investors on a more level playing field with management and larger shareholders. The proposed threshold would bar all current filers of proposals, effectively negating the rule entirely.

In contrast with the unworkable provisions of the discussion draft, the SEC has the ability to increase the filing threshold in accordance with the rate of inflation. The last time the filing threshold was increased by the SEC was 1998, when it was increased from the $1,000 level set in 1983, to $2,000 based on inflation. There is no need or propriety in increasing the holding period; in the context of the investing marketplace, a one-year holding period represents a reasonable compromise between providing adequate investor flexibility while ensuring a sufficiently long-term stake.

Filing by Agents – Interfering with State Law Of Agency

The proposed Section 844 (c) would eliminate the right of shareholders to rely on agents, lawyers and experts to file proposals on their behalf. Throughout the investing marketplace, investors necessarily rely on agents to effectuate their intentions as investors. The ability to appoint an agent is a matter of state law; as such, it would be an inappropriate encroachment on state law to eliminate investors’ ability to appoint an agent, such as an advisor, lawyer or expert to file proposals on their behalf.

The current resubmissions thresholds have proven effective as allowing an ongoing deliberation and education process on issues raised by a shareholder proposal. Support for many proposals evolves along with an issue. The existing 3%, 6% and 10% thresholds have proven appropriate measures of shareowner support. They have allowed numerous proposals on issues such as say-on pay-and sustainability to grow in support over time.

The federally established right to publish shareholder proposals on the corporate proxy has evolved into an important element of value in the bundle of rights associated with share ownership. Given the investment-backed expectations associated with these rights, it is inappropriate for Congress to make the kinds of changes proposed by the legislation.

Trustees, advisors and investment managers typically have a fiduciary obligation to monitor risk associated with their portfolios, as well as contractual obligations to shareholder clients to engage in active management of portfolio companies including filing shareholder proposals when necessary.

The shareholder proposal process is part of an integrated set of rights and responsibilities that investors and management owe to one another — the form of social contract between management and providers of capital. Under this arrangement, shareholders dedicate attention, energy, and resources, together with board and management, in ensuring the success of their companies. To the extent that legislation upsets this balanced relationship embodied in the set of rules and interpretations created by the SEC and the courts, it would undermine the collaborative relationship of trust between capital providers and capital recipients. This is not an area where Congress should be involved; a misstep could undermine support for the capital markets.

Thank you for the opportunity to comment. I would be glad to provide the Committee with additional information.