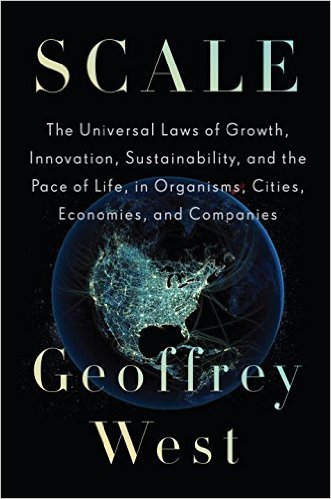 Scale: The Universal Laws of Growth, Innovation, Sustainability, and the Pace of Life in Organisms, Cities, Economies, and Companies is about big data and takes a big time commitment to read. Scale is neither poetry or a novel. It is primarily information and speculation. 450 pages could have been distilled to 45. That said, this slog of a read should get anyone thinking with fresh insights. Below are my reflections on small portions of this tome by Geoffrey West, a senior fellow at Los Alamos National Laboratory and a distinguished professor at the Santa Fe Institute.

Highly complex systems have their origin in very simple rules governing the interaction between their individual constituents.

In biology, network dynamics constrains the pace of life to decrease systematically with increasing size following the ¼ power scaling laws. In contrast, the dynamics of social networks underlying wealth creation and innovation leads to the opposite behavior, namely, the systematically increasing pace of life as city size increases: diseases spread faster, businesses are born and die more often, commerce is transacted more rapidly, and people even walk faster, all following the approximate 15 percent rule.

How will the Internet impact these generalizations? Perhaps the pace of globally connected small towns like Boulder or Davis outpace more the more isolated Pyongyang? Being interconnected may be more important than size. As he repeatedly points out in Scale, correlation is not causation.

Companies “scale sublinearly as functions of their size, rather than superlinearly like socio-economic metrics in cities.”

Is that inevitable or do we just need to rethink corporate governance? Many corporate deaths might be viewed as infectious ideas finding a better host. Maybe the corporal body dissolves but its essence continues in another form without having to continue to pay rents to shareholders who may no longer contribute to the enterprise. 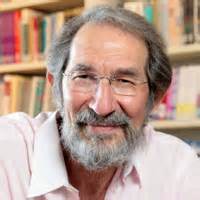 West is more on target in physics than business. For example, he seems to think when investors “buy additional stocks” they “help support the future health and growth of the company.” Buying stock on the secondary market does little to contribute to company growth. Ownership after the IPO is more about extraction rather than contribution.

West’s research for Scale finds the “effective metabolic rate” of public corporations “is neither sub- nor superliner but falls right in the middle by being linear.” This may be true for old line manufacturing or retail companies but I doubt the generalization holds for companies built primarily on the relatively cost-free infrastructure of the Internet.

Companies typically operate as highly constrained top-down organizations that strive to increase efficiency of production and minimize operational costs so as to maximize profits. In contrast, cities embody the triumph of innovation over the hegemony of economies of scale. [Cities] operate in a more distributed fashion, with power spread across multiple organizational structures from mayors and councils to businesses and citizen action groups. No single group has absolute control.

Scale contains many interesting insights like this by West comparing companies to cities. He finds companies more bureaucratic and rule-laden as they mature to “tried and true” strategies, while cities continue to innovate.

We can learn from these big data observations by Santa Fe Institute researchers and make companies more like cites by combining currently distinct forms of publicly traded corporate forms with those of consumer, employee and producer cooperatives. We need more inclusive forms of corporate governance which draw on the strengths of diversity and creativity, while retaining entrepreneurial drive. See Board Seats for Franchisees: Democratic Paradigm and #WeAreTwitter Record Date Approaches  as well as chapter 21 of The Handbook of Board Governance: A Comprehensive Guide for Public, Private, and Not-for-Profit Board Members.

Such forms of business will help address the final problem raised by Scale. We cannot rely on innovative interventions to continuously reset the clock, “allowing growth to continue and the impending singularity to be avoided.”

To sustain growth the time between successive innovations has to get shorter and shorter. Thus paradigm-shifting discoveries, adaptations, and innovations must occur at an increasingly accelerated pace. Not only does the general pace of life inevitably quicken, but we must innovate at a faster and faster rate!

West, a physicist by training, is here thinking too much like a conventional economist, focused on growth conventionally measured by those who view people as homo economicus. West asks, “Can we return to an analog of a more ‘ecological’ phase from which we evolved and be satisfied with some version of sublinear scaling and its attendant natural limiting, or no-growth, stable configuration?”

One answer lies in redefining growth. When we approach corporate governance from the standpoint of the whole person, with all their constituent values and desires, not just as idealized profit maximizers, humanity will redefine growth in ways that just may accelerate superlinearly without the impossible burden of Sisyphus.