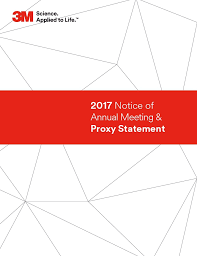 3M Proxy Voting Guide provided by Corporate Governance (CorpGov.net). 3M (MMM), 3M Company operates as a diversified technology company worldwide and is one of the stocks in my portfolio. ProxyDemocracy.org had collected the votes of three fund families when I checked and voted. Their annual meeting is coming up on May 9, 2017.

I voted FOR lowering the special meeting threshold; AGAINST pay, compensation committee and other items. See how and why I voted all items below. I voted with the Board’s recommendations 47% of the time. View Proxy Statement via SEC’s EDGAR system (look for DEF 14A).

3M’s Summary Compensation Table shows the highest paid remaining named executive officer (NEO) was CEO and Chair Inge G. Thulin  at $16.7M in 2016. I am using Yahoo! Finance to determine the market cap ($118B) and I am roughly defining large-cap as $10B, mid-cap as $2-10B, and small-cap as less than $2B. 3M is a large-cap company. According to the Equilar Top 25 Executive Compensation Survey 2015, the median CEO compensation at large-cap corporations was $10.3M in 2015, so pay was significantly above that amount. 3M shares outperformed the S&P 500 over the most recent one, five, and ten year time periods; underperforming in the last two year time period. That’s worth paying above median but not that much more.

I disagreed and voted “AGAINST” the say-on-pay item. The “Lake Woebegone effect,” where everyone is above average and the averages are recalculated upward every year, has to stop. We cannot just keep voting in favor of higher and higher pay packages.

Moreover,  Inside director Inge G. Thulin is a current Chairman of the Board and CEO of the Company and combined with the Board Rating  of Some Concerns,  the Company has received we recommend that clients WITHHOLD votes from this nominee.  We believe that there is an inherent potential conflict, in having the CEO or former CEO serve as the Chairman of the Board. Consequently, we prefer that companies focus on the following areas to improve its corporate governance practices: separate the roles of the Chairman and CEO, hold annual director elections, have one class of voting stock only, have key board committees consisting of independent directors and majority of independent directors on board and include non-binding compensation vote on agenda to further ensure board independence and accountability.

I agree with regard to voting against affiliated outside directors on key committees but am not ready to go there with regard to splitting chair and CEO,., not yet. Many of these directors served on Compensation Committee, so this screen added only a new vote AGAINST Herbert L. Henkel.

3M Proxy Voting Guide: Votes Against Board Position in Bold

As mentioned above, ProxyDemocracy.org had collected the votes of three funds when I voted.  Proxy Insight reported additional votes from Canada Pension (CPPIB) and Teacher Retirement System of Texas (TRS)  voted.

In order for a stockholder proposal to be considered for inclusion in 3M’s Proxy Statement for next year’s Annual Meeting, our Corporate Secretary must receive the proposal by November 22, 2017. Such proposals must be sent via registered, certified, or express mail (or other means that allows the stockholder to determine when the proposal was received by the Company) to: Gregg M. Larson, Vice President, Deputy General Counsel and Secretary, 3M Company, 3M Center, Building 220-14W-06, St. Paul, MN 55144-1000.