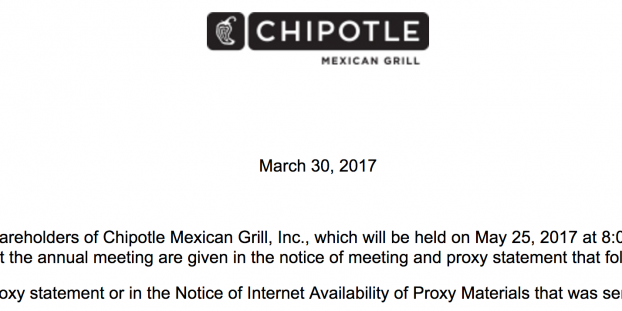 Chipotle Proxy Voting Guide by CorpGov.net. Chipotle Mexican Grill, Inc. (CMG), together with its subsidiaries, develops and operates Chipotle Mexican Grill restaurants. As of December 31, 2016, the company operated 2,198 Chipotle restaurants throughout the United States, as well as 29 international Chipotle restaurants; and 23 restaurants with non-Chipotle concepts. Chipotle  is one of the stocks in my portfolio. ProxyDemocracy.org had collected the votes of four fund families when I checked and voted. Their annual meeting is coming up on May 25, 2017.

I voted FOR #5 lower Special Meeting threshold from 25% to 15% of shares. See how and why I voted other items below. I voted with the Board’s recommendations 58% of the time. View proxy via SEC’s EDGAR system (look for DEF 14A).

From the Yahoo Finance profile: Chipotle Mexican Grill, Inc.’s ISS Governance QualityScore as of May 1, 2017 is 7. The pillar scores are Audit: 5; Board: 10; Shareholder Rights: 3; Compensation: 4. Brought to us by Institutional Shareholder Services (ISS). Scores range from “1” (low governance risk) to “10” (higher governance risk). Each of the pillar scores for Audit, Board, Shareholder Rights and Compensation, are based on specific company disclosures. That gives us a quick idea of where to focus: the Board.

Chipotle’s Summary Compensation Table shows the highest paid named executive officer (NEO) was CEO/Chair Steve Ellis at $15..7M in 2016. I am using Yahoo! Finance to determine the market cap ($14.2B) and I am roughly defining large-cap as $10B, mid-cap as $2-10B, and small-cap as less than $2B. Chipotle is a large-cap company. According to EY Center for Board Matters, the 3-yr average CEO compensation at large-cap corporations is $12.7M in 2016, so pay was well above that amount, so pay was well above that amount. Chipotle shares outperformed the S&P 500 over the most recent ten year time period but underperformed during the most recent one, two and five year time periods.

We recommend that clients WITHHOLD votes from the member of the Compensation Committee, namely Affiliated outside director, Neil W. Flanzraich. Egan-Jones believes that the Compensation Committee should be held accountable for such a poor rating and should ensure that the Company’s compensation policies and procedures are centered on a competitive pay-for-performance culture, strongly aligned with the long-term interest of its shareholders and necessary to attract and retain experienced, highly qualified executives critical to the Company’s long-term success and the enhancement of shareholder value.

Beyond the withhold for compensation committee members, Egan-Jones recommended the following with regard to board nominees:

The nominees appear qualified, however Inside director, Steve Ells, is a current Chairman of the Board and CEO of the Company and combined with the Board Rating  of Some Concerns,  the Company has received we recommend that clients WITHHOLD votes from this nominee.  We believe that there is an inherent potential conflict, in having the CEO or former CEO serve as the Chairman of the Board. Consequently, we prefer that companies focus on the following areas to improve its corporate governance practices: separate the roles of the Chairman and CEO, hold annual director elections, have one class of voting stock only, have key board committees consisting of independent directors and majority of independent directors on board and include non-binding compensation vote on agenda to further ensure board independence and accountability.

In addition, we recommend that clients WITHHOLD votes from Affiliated outside directors, Albert S. Baldocchi, current member of the Audit committee and Neil W. Flanzraich, current member of the Audit and Compensation committees of the Board. We believe that key Board committees namely Audit, Compensation and Nominating committees should be comprised solely of Independent outside directors for sound corporate governance practice.

I agree, especially considering the even more radical votes of Calvert, Trillium and CBIS.

James McRitchie (that’s me) is the proponent. Egan-Jones believes the current the current 25% requirement is adequate. I course I voted ‘FOR’ lowering the threshold to 15%. A growing number of firms (30% of the S&P 500) allow shareholders to act by written consent. Such rights are important, in cases of emergency where even a special meeting would take too long. Many states allow a 10% threshold, so 15% seems like a reasonable compromise.

#6 Report on Sustainability and #7 Report on Feasibility of Net-Zero GHG Emissions. These proposals are warranted since they address issues of not only social responsibility but significant risk. PayPal does not currently disclose its greenhouse gas (GHG) emissions reduction goals, its environmental policies or its environmental oversight mechanisms.

AgainstChipotle Proxy Voting Guide: Votes Against Board Position in Bold

As mentioned above, ProxyDemocracy.org had collected the votes of four funds when I voted. Proxy Insight reported no additional votes but I am sure they will soon.

Any proposal of a shareholder intended to be included in our proxy statement and form of proxy/voting instruction card for the 2018 annual meeting of shareholders pursuant to SEC Rule 14a-8 must be received by us no later than November 30, 2017, unless the date of our 2018 annual meeting is more than 30 days before or after May 25, 2018, in which case the proposal must be received a reasonable time before we begin to print and send our proxy materials. All proposals must be addressed to Chipotle Mexican Grill, Inc., 1401 Wynkoop Street, Suite 500, Denver, CO 80202, Attn: Corporate Secretary..